The Battle of the Via Valeria Pass 90 BC

Historical Background
“Publius Praesentius routed Perperena who was at the head of 10,000 men, killed some 4,000 and captured the weapons of most of the remainder, whereupon Rutilius the consul relieved Perperena of his command…” (Appian ‘Civil Wars’ Book 1 Chapter 41) “The western pass was a rocky gorge lying at four thousand feet, and the snows of winter had not entirely melted. The troops muttered and complained of the cold, so Perperna failed to post as many lookouts on the high points as he should have… Publius Praesentius attacked his column just as it became completely enclosed by the ravine, leading four legions of Paeligni hungry for a victory. They had their victory complete as it was sweet. Four thousand of Perperena’s soldiers lay dead in the pass….” (From “The Grass Crown” a historical novel by Colleen McCullough pages 435-36) 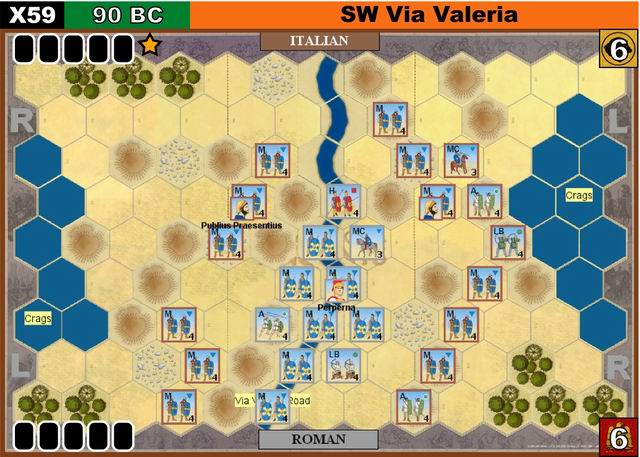 Victory
6 Banners—Banners are scored in the normal way except the Italian Player gets 1 Banner if Perperna is forced to evade off the map. .

Leader Command & Rally Special Rules:
All Leaders may cancel a retreat or a sword hit if present with the unit.
Units on both sides involved in close combat with the support of a Leader may only count one helmet hit amongst those rolled to inflict a hit on an opposing unit. Units and the Rally Card: No unit can be rallied to beyond its strength at the start of the scenario. If a Player rolls “swords” when attempting to rally he may freely chose which unit gets a block back.
Reduced Missile Range Special Rules:
a) Light Archers only have a range of 2 hexes in this scenario—and may missile fire at adjacent enemy units.
b) Auxillia & Light Infantry only have a range of one hex in this scenario—and may missile fire at adjacent enemy units.
c) An ordered unit may either missile fire or conduct close-combat in a player-turn—never BOTH.

Special Terrain Rules:
Crag Hexes: All Crag hexes are impassable mountain terrain.
Via Valeria Hexes: All Roman units battling-back only from Via Valeria hexes on the first three Italian Player-turns do so at one dice less than normal---this rule feature shows the difficulty in moving from march column to line in a narrow roadway while under attack. For all other purpose treat Via Valeria hexes as clear terrain.
Hill Hexes & Cavalry: Cavalry units on both sides may not enter, retreat, evade, or attack into hill hexes in this scenario. Hill hexes are totally impassable for Cavalry units in this scenario; Cavalry units may battle-back into them, however, if attacked from a hill hex.