“The Grass Crown”
The Battle of Pompeii 89 BC

Historical Background
“…Lucius Cluentius insolently took up position only six hundred yards away from Sulla’s camp in the hills near Pompeii. Unable to endure the insult, Sulla attacked Cluentius without waiting for his own foragers to come in, and retreated after getting the worst of it, but when he was given the assistance of the foragers he defeated Cluentius. The latter at first withdrew to another camp, further away, but on receiving some Gaulish reinforcements approached Sulla again. As the armies came together a Gaul of huge size ran forward and challenged any Roman to single combat, but when a little Moor accepted the challenge and killed him, the Gauls were terrified and fled. Not even the rest of Cluentius’ army stood their ground, now that their battle formation had been wrecked, and they fled in disarray to Nola. In the pursuit Sulla killed about 3,000 men as they fled, and because the Nolans were letting them in by a single gate to stop the enemy from coming in after them, about 20,000 died under the walls, among these was Cluentius, who fell fighting.” (Chapter 50 Book1 from Appian’s Civil Wars written 2nd Century A.D) 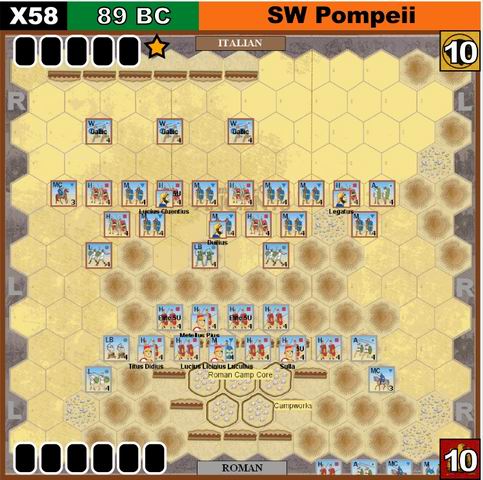 (Neither side may have an initial hand that includes “Line Command”!!)

Roman Army
Leader: Sulla
6 Cards (may be reduced to 5 or even 4 Cards via the Single Combat rule & loss/evasion of Sulla)

Victory
Victory is 10 Banners initially for both sides scored in the normal way, however the Italians receive 2 Banners if they eliminate Sulla, and 1 Banner for each Roman Camp Core hextile they manage to remove. The Romans for their part receive 1 Banner for every Italian Campworks they remove after the first. The number of Banners needed for victory for a particular side can be effected by the General Retreat (+1 Banner to the opposite side for victory) and Single Combat (-2 Banners for the winner of the Single Combat) special rules (see below).

Leader Command & Rally Special Rules:
All Leaders may cancel a retreat or a sword hit if present with the unit.
Sulla may cancel both a retreat and a sword hit if present with the unit.
Lucius Licinius Lucullus the Roman Tribune may only help Roman units involved in combat that he is actually stacked with due to his relative youth and lower rank.
Units on both sides involved in close combat with the support of a Leader may only count one helmet hit amongst those rolled to inflict a hit on an opposing unit. Exception: Roman units supported by Sulla may count up to two helmet rolls as hits in a single close-combat or battle-back.
If Sulla is eliminated or evades off the field the Roman Player must discard one card immediately thereby reducing his hand permanently by one Card.
Units and the Rally Card: No unit can be rallied to beyond its strength at the start of the scenario. If a Player rolls “swords” when attempting to rally he may freely chose which unit gets a block back.

Roman Pilum:
Each Roman/Italian Legionary Infantry unit starts with a Pilum Marker. The Pilum is a one-time use weapon that is generally fired right before a Roman/Italian Legionary unit attacks in close-combat or is itself attacked by the enemy in close-combat. Once the pilum is fired (or lost see below) –the Pilum marker is removed from the Roman unit to indicate that the pilum has been expended and the unit may not throw Pilum for the rest of the battle unless the Pilum is replenished via a General Retreat (see below).
Just before a Roman/Italian unit with pilum is attacked or is itself attacked by the enemy for the very first time in the battle in close-combat it throws its pilum—roll one die and apply normal hits for swords, color, or a Flag/retreat hit Afterwards remove the Pilum marker. The act of throwing the pilum is not considered to be part of the Close-Combat—so any result of the pilum throw is resolved before the Close-combat. If two Roman Legionary Infantry units that have not thrown pilum yet engage the attacker resolves his pilum throw first. An attached Leader may use his special ability to cancel a “swords” hit that was inflicted via a pilum hit (see special Command rules) on the unit he is stacked with.
Roman/Italian Legionary units, adjacent to the enemy, that have not expended their Pilum may also be ordered to throw Pilum if the card “Darken the Sky” is played by their commanding player. The Player picks one adjacent enemy unit and throws two dice –apply the results just as one would before close combat—and remove the Pilum Marker.

The Return of Sulla’s Off-map Roman Foragers:
All of Sulla’s initially off map four Roman units return at the start of the 5th Roman Player-turn of the scenario—they arrive in any vacant map-edge hexes on Map 2, (A1 through A13, B1, B12, C1, C13, D1, D12) , and are placed on-map by the Roman Player as he wishes, one per vacant hex. The arriving Legionary infantry units arrive with pilum.

“General Retreat” Option Rules:
Each Player at the start of his player-turn, on any player-turn after his second may, once per game, declare a “General Retreat” in place of executing a normal player-turn. ALL that player’s units & Leaders conduct a normal retreat of one hex (if Roman), or three hexes (if Italian), however the Gallic Warrior Italian units never retreat in a General Retreat. The units & Leaders retreating are retreated normally by the owner player in any order he wishes, and suffer the usual penalities if they fail to retreat. Once the General Retreat is done the owning player selects four retreated units to each gain back one lost block (up to their initial strength only). A Player whose opponent has declared a General Retreat already in the course of the game may not himself declare his own General Retreat until at least his third player turn or later after his opponent’s retreat has taken place. A Player declaring General Retreat also increases the requirement for Victory by his opponent by one banner & all the retreating Legionary units that make the full retreat receive back their pilum Markers.

“Single Combat” Rules:
Note: This rule allows for the single combat between the Gaul and the Moor that supposedly (according to Appian) had a big effect on the battle. See the Historical Background above. ALL Italian Warrior units are considered to be Gallic Warriors.
The Single combat may only happen once per game when any Italian (Gallic) Warrior units is within 1 or 2 hexes of a Roman Light unit or Cavalry unit of any types, and the Italian General Retreat has already occurred. Either player in such a situation may declare ‘Single Combat’ in lieu of taking his Player-turn and must play a Leadership Card (of any type) to have the single combat come off. Another Card is immediately drawn by the player initiating the single combat. To resolve the single combat roll a (D10) ten-sided die: The Player initiating the single combat is the ‘Challenger’ the other is the “Champion”.
Results:
1-4 Challenger wins (see below for results)
5-7 The pointless Single Combat has no effect on the battle—nothing happens.
8-10 Champion wins (see below for results)
If the Italian Player wins the single combat he picks four Roman units within three hexes of any Gallic Warrior unit(s) to each lose one block, this can result in elimination---and the Italian Player’s requirement to reach victory is reduced by two Banners.
If the Roman Player wins the single combat each Gallic Warrior unit loses one block & must conduct a normal retreat of two hexes and any two Italian units picked by the Romans within two hexes of any Gallic unit also each lose one block and must conduct a normal retreat of one hex---and the Italian Player’s requirement to reach victory is reduced by two Banners.
The player on the losing end of the single combat in both of the above cases must also discard randomly one Command Card (permanently with a one card hand reduction).

Changing Plans-The redraw option: Up to twice per game, starting Player-turn 3 or later, each Player may, instead of taking his player-turn, decide to discard exactly three cards from his hand and pick up three new cards from the draw deck. The re-draw option may not be exercised on consecutive Player-turns by the same player or by two different Players on back to back opposing Player-turns. The redraw option may not be utilized if the overall Leader of the army shown in the War Council has been eliminated or has evaded off map.