The Battle of Mount Falernus (Tinna River?) 90BC

‘This was the state of affairs when the so-called ‘Social War’ broke out, involving the many peoples of Italy. It began unexpectedly, rapidly became serious, and caused enough apprehension to extinguish factional strife in Rome for some time. When it died down it too gave birth to other internal conflicts, and to faction leaders who were more powerful and employed against each other not legislative programmes, not demagoguery, but whole armies. And for these reasons I have included it in this history, because it originated in the civil dissensions in Rome and it resulted in much worse conflict of that type.” (From Appian’s “Civil Wars” Book 1 Chapter 34 originally written in the early to mid-2nd century AD)

Historical Background
Pompey Strabo was a large Roman Senatorial landholder and a patron with an immense client base in Umbria/Picenum. At the start of the Social War he quickly raised what amounted to a private army to lead against the Italians. Near Mt. Falernus a huge Italian force made up of Marsi, Picentes, and Vestini attacked him. Although defeated Strabo managed a fighting withdrawal with his army relatively intact to Firmum Picenum on the Adriatic coast where he stood off an Italian siege. 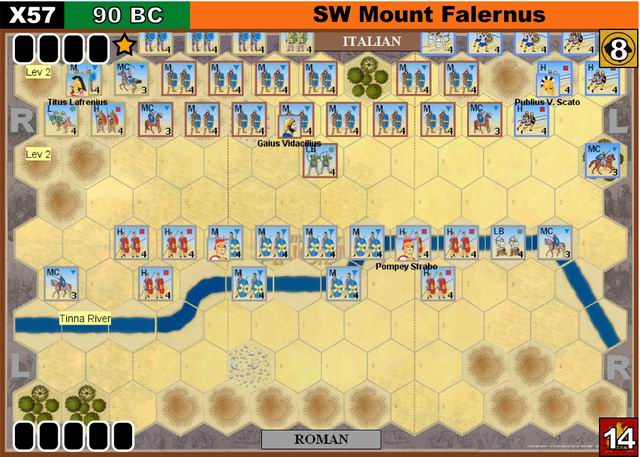 —Only the Picentes Force may move on Italian Turn 1)

Leader Command & Rally Special Rules:
All Leaders may cancel a retreat or a sword hit if present with the unit.
Units on both sides involved in close combat with the support of a Leader may only count one helmet hit amongst those rolled to inflict a hit on an opposing unit, unless the Leader in question is Scato (the Italian) or Strabo (the Roman) in which case up to 2 helmet rolls count as hits in a single combat
An Italian Leader from one Italian force may not benefit units of another Italian force involved in close-combat or Battle-back. .
Units and the Rally Card: No unit can be rallied to beyond its strength at the start of the scenario. If a Player rolls “swords” when attempting to rally he may freely chose which unit gets a block back.

Roman Pilum:
Each Roman/Italian Legionary Infantry unit starts with a Pilum Marker. The Pilum is a one-time use weapon that is generally fired right before a Roman/Italian Legionary unit attacks in close-combat or is itself attacked by the enemy in close-combat. Once the pilum is fired (or lost see below) –the Pilum marker is removed from the Roman unit to indicate that the pilum has been expended and the unit may not throw Pilum for the rest of the battle.
Just before a Roman/Italian unit with pilum is attacked or is itself attacked by the enemy for the very first time in the battle in close-combat it throws its pilum—roll one die and apply normal hits for swords, color, or a Flag/retreat hit Afterwards remove the Pilum marker. The act of throwing the pilum is not considered to be part of the Close-Combat—so any result of the pilum throw is resolved before the Close-combat. If two Roman Legionary Infantry units that have not thrown pilum yet engage the attacker resolves his pilum throw first. An attached Leader may use his special ability to cancel a
“swords” hit that was inflicted via a pilum hit (see special Command rules) on the unit he is stacked with.
Roman/Italian Legionary units, adjacent to the enemy, that have not expended their Pilum may also be ordered to throw Pilum if the card “Darken the Sky” is played by their commanding player. The Player picks one adjacent enemy unit and throws two dice –apply the results just as one would before close combat—and remove the Pilum Marker.

Italian Entry of initially off-map units onto the map and Roman Exit:
Italian Entry: The Marsi and Vestini forces each start with four units off-map. They may enter the map starting on Italian Player-turn 2 at the rate of up to two units per force per Italian Player-turn. Starting with the second Italian Player-turn the Italian Player may choose to bring them onto the map. Before playing his card for a Player-turn he may place the entering off-map units in any vacant map-edge hex from I1 through I5 if Vestini and I9 through I13 if Marsi. They may than be ordered by the card the Italian Player is about to play as appropriate. Once on the map they cannot leave it again save by elimination.
Roman Exit: Roman units and leaders may voluntarily leave the map by exiting from hexes A1 to A13 inclusive on the mapedge. Roman Units/Leaders that start their own player-turn occupying these mapedge exit hexes & that are ordered by the Roman Player may voluntarily exit the map at the player’s option. Roman Units/Leaders in mapedge hexes ordered via a Line Command, however may never use that order/card to exit the map. Roman units and Leaders unit score banners if they voluntarily exit, but a forced Leader evasion off the map by a Roman Leader never scores a banner and units may not satisfy Flag results by retreating off-map—follow the normal rules in such cases.