Social War: 1st Battle of the Melfa Gorge 90 BC

Historical Background
“Vettius Scato routed Sextus Iulius (Caesar), killing 2,000 of his men, and drove on against Asernia, which supported the Romans. Lucius Scipio and Lucius Acilius who were organizing the defense, fled disguised as slaves and eventually the enemy starved the town into submission.” (Chapter 41 Book1 from Appian’s Civil Wars) 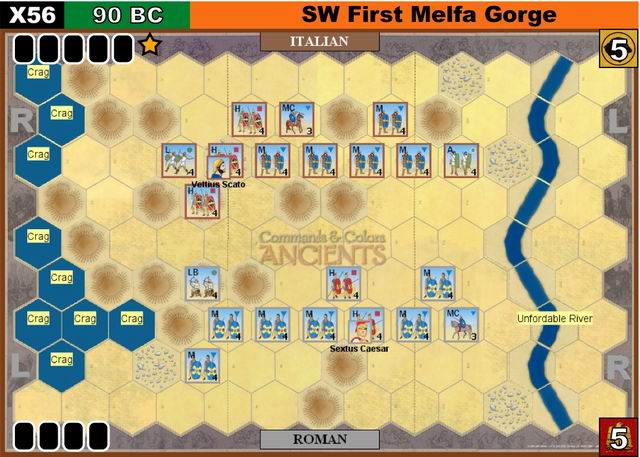 Leader Command & Rally Special Rules:
All Leaders may cancel a retreat or a sword hit if present with the unit.
Units on both sides involved in close combat with the support of a Leader may only count one helmet hit amongst those rolled to inflict a hit on an opposing unit, if the Leader is Scato up to two helmet hits may be counted.
Units and the Rally Card: No unit can be rallied to beyond its strength at the start of the scenario. If a Player rolls “swords” when attempting to rally he may freely chose which unit gets a block back.

Roman Pilum:
Each Roman/Italian Legionary Infantry unit starts with a Pilum Marker. The Pilum is a one-time use weapon that is generally fired right before a Roman/Italian Legionary unit attacks in close-combat or is itself attacked by the enemy in close-combat. Once the pilum is fired (or lost see below) –the Pilum marker is removed from the Roman unit to
indicate that the pilum has been expended and the unit may not throw Pilum for the rest of the battle.
Just before a Roman/Italian unit with pilum is attacked or is itself attacked by the enemy for the very first time in the battle in close-combat it throws its pilum—roll one die and apply normal hits for swords, color, or a Flag/retreat hit Afterwards remove the Pilum marker. The act of throwing the pilum is not considered to be part of the Close-Combat—so any result of the pilum throw is resolved before the Close-combat. If two Roman Legionary Infantry units that have not thrown pilum yet engage the attacker resolves his pilum throw first. An attached Leader may use his special ability to cancel a “swords” hit that was inflicted via a pilum hit (see special Command rules) on the unit he is stacked with.
Roman/Italian Legionary units, adjacent to the enemy, that have not expended their Pilum may also be ordered to throw Pilum if the card “Darken the Sky” is played by their commanding player. The Player picks one adjacent enemy unit and throws two dice –apply the results just as one would before close combat—and remove the Pilum Marker.