Lupus’ Last Stand and The Battles of the Liris River 90BC

Game Notes: This is an interesting two front battle situation wherein a different side has the advantage at each end of the map.

Historical Background
“On the Liris, Rutilius (Lupus) the consul and Gaius Marius were constructing bridges to cross the river not far from each other. Vettius Scato, who had encamped opposite them, but nearer to Marius, succeeded in setting an ambush by night in the ravines by Rutilius’ bridge. At dawn he allowed Rutilius to cross and then sprang the ambush, killing many of Rutilius’ men on dry land and forcing many others into the river. In this battle Rutilius himself was wounded in the head by a missile and died shortly afterwards. At the other bridge Marius, realizing what had happened from the corpses being carried down by the river, thrust aside the force that stood in his way, crossed the river, took Scato’s camp which had been left with a handful of defenders, and forced Scato not only to spend the night where he had won his victory, but to decamp at dawn because he was short supplies. When the bodies of Rutilius and many other aristocrats were brought for burial to Rome, the sight of the dead bodies of the consul and so many others proved grim and the resulting mourning lasted many days. After this the Senate decreed that the war casualties were to be buried where they died, so that the rest of the population would not be deterred from military service by what they saw. When they learnt of this the enemy made the same regulation themselves” (Chapter 43 Book1 from Appian’s Civil Wars) Expanded Map Setup: The Liris River scenario uses an extended two-section map to better allow for the Italian camp, and the maneuvers and movements of both Roman forces and Scato’s Italian army. Take a second C & C Ancients map and cut or fold it over lengthwise along the entire center of the “E” hex-row. The two maps are then abutted so that D1 on the now “half-map” is adjacent to A1 and A2 on the main full map; similarly D12 will end up adjacent to A12 and A13 on the main map. The play area is now 13 hexrows deep and 12 or 13 hexes wide depending on the hexrow. The main or full map is referred to as” Map 1” and the four row or half map is called:” Map 2” when charting the locations detailed below. 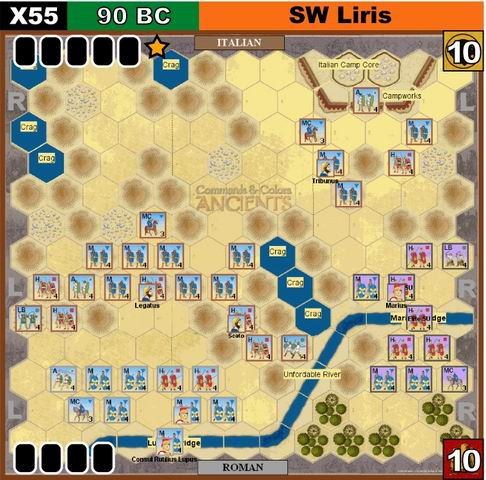 (Neither side may start with a Line Command Card in the initial hand !!)

Victory: 10 Banners for both sides—The Roman side scores 1 Banners for each Italian Camp Core Hextile they remove and 1 Banner for every two Italian Campworks Hextiles they removed. All other scoring is the same as normal, however see the rules below on the exit of Lupus’ force units from the map via the bridge on Map 2 at A5 below.

Leader Command & Rally Special Rules:
All Leaders may cancel a retreat or a sword hit if present with the unit.
Exceptions: Marius (the Roman) & Scato (the Italian) may cancel a retreat and a sword hit if present with the unit
Units on both sides involved in close combat with the support of a Leader may normally only count one helmet hit amongst those rolled to inflict a hit on an opposing unit, but Roman units supported by Marius may count up to two helmet rolls as hits.
The Italian Tribune may only provide benefits to and support Italian units he is stacked with.
Units and the Rally Card: No unit can be rallied to beyond its strength at the start of the scenario. If a Player rolls “swords” when attempting to rally he may freely chose which unit gets a block back.

Extra Commands and Roman Force Coordination:
Marius’ force and Lupus’ force Units & Leaders may never be ordered in the same card play by the Roman Player. Only Units & Leaders of one of the two Roman forces may be ordered by play of a single card by the Roman player
This rule may prevent some Units from being ordered by a particular card play-in that case only Units & Leaders from one force are ordered per the card at the option of the
Roman Player-the other possible orders that would be available under the normal rules are lost and not used.
Each Player in the game (both Italian & Roman) may also order two additional Unit/Leader per own player-turn if Roman Player and one additional if the Italian—in addition to those ordered by the card played that player-turn. In the case of the Roman the ordered Units/Leaders may be from a different force than the force ordered directly by the card play in that player-turn.