“Clash of the Consuls”
The Battle of Fucine Lake 89 BC

Historical Background
Near Fucine Lake one of the Roman consuls for that year (89BC), Lucius Cato, was killed and his army defeated by a large force of Marsi and other Italians under the command of Quintus Silo the Italian consul. Some or all of the Roman legates also perished in the battle, but the core of the Roman army managed to retreat back intact to Tibur, near Rome, led by the tribunes and centurions in spite of the heavy losses suffered on the field. 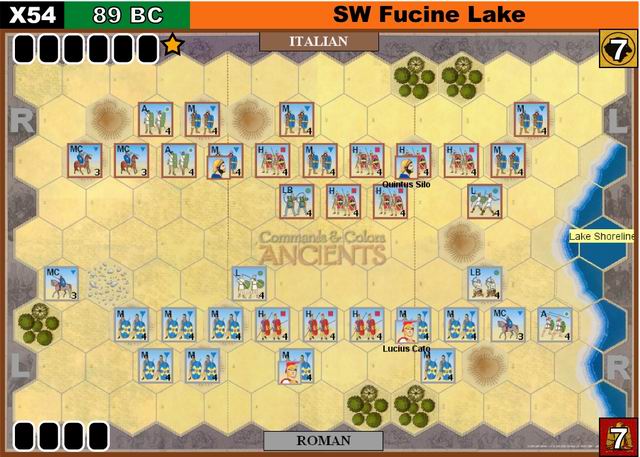 Victory
Victory is 7 Banners per side, however the first Light unit (regardless of type) eliminated on a side doesn’t count for victory by the other side.

Special Scenario Rules:
Command Rules:
The “Marian” Command Card Deck
Historical Note: Combat in the 1st Century BC between Roman/Italian Legions was somewhat different than the wars between civilized states in the 3rd Century BC. There was less room for combined arms tactics and maneuver, and battles probably tended to be more of the nature of hand to hand full bore slugfests.
This particular scenario utilizes a different Command Card Deck than the original C & C Ancients Deck. Eight (8) Cards are removed from the original deck leaving 52 Cards for scenario play. This new deck is called the “Marian Deck” and it is named after Caesar’s uncle Gaius Marius, a general in the Social War, and a reorganizer of the Roman Legions in circa 105-103BC (several years before Caesar was born) to meet the challenges of the Germanic Tribal invasions that threatened the Roman Republic of the time.
The following eight cards are removed before play and put aside to create the Marian Deck:
X4 “Order Light troops”, x1 “I Am Spartacus”, x2 “Move-Fire-Move”, x1 “Mounted Charge”---note that one Mounted Charge” card is still retained in the deck.
Leader Command & Rally Special Rules:
All Leaders may cancel a retreat or a sword hit if present with the unit.
The Italian consul, Quintus Silo, may cancel both a retreat and a sword hit if present with the unit.
Units on both sides involved in close combat with the support of a Leader may only count one helmet hit amongst those rolled to inflict a hit on an opposing unit. Units and the Rally Card: No unit can be rallied to beyond its strength at the start of the scenario. If a Player rolls “swords” when attempting to rally he may freely chose which unit gets a block back.