Challenge Match
The Battle of the Aufidius River 89BC

Historical Background
“…While Gaius Cosconius, another of the Roman commanders, attacked and burnt Salapia (in Apulia), received the surrender of Cannae, and laid siege to Canusium. Here the Samnites attacked him but he fought against them with great determination until after a terrible slaughter on both sides he was worsted and retreated to Cannae. Because there was a river between the two armies, the Samnite general, Trebatius challenged him either to cross it for a battle, or to withdraw so that he himself could cross. Cosconius accordingly withdrew, but fell on Trebatius as his army was crossing, defeated him in battle, and when he retreated in disorder towards the river slaughtered 15,000 of his men; the remainder fled to Canusium with Trebatius. Cosconius then overran the territories of Larinum, Venusia…and invaded the Pedicoli, obtaining the surrender of that people in two days. “ (Chapter 52 Book1 from Appian’s Civil Wars) 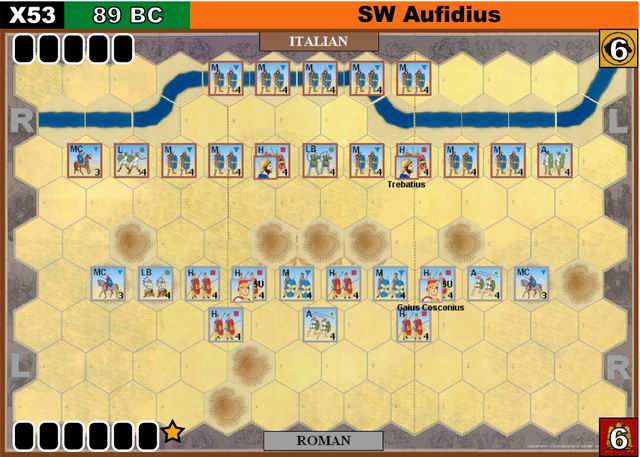 Victory
Victory for both sides is 6 Banners, however Light Class units regardless of type on both sides count only a ½ Banner each toward victory when eliminated.

Leader Command & Rally Special Rules:
All Leaders may cancel a retreat or a sword hit if present with the unit.
Units on both sides involved in close combat with the support of a Leader may only count one helmet hit amongst those rolled to inflict a hit on an opposing unit. Units and the Rally Card: No unit can be rallied to beyond its strength at the start of the scenario. If a Player rolls “swords” when attempting to rally he may freely chose which unit gets a block back.
Reduced Missile Range Special Rules:
a) Light Archers only have a range of 2 hexes in this scenario—and may missile fire at adjacent enemy units.
b) Auxillia, Light Cavalry, & Light Infantry only have a range of one hex in this scenario—and may missile fire at adjacent enemy units.
c) An ordered unit may either missile fire or conduct close-combat in a player-turn—never BOTH.

Special Terrain Rules:
Fordable River Hexes: The fordable river that before the battle separated the two forces was not much of an obstacle, therefore use the following rules: Ordered units may move right through river hexes just as if it they are clear terrain—in combat effects units close-combat attacking out of or battling back out of river tiles do so at only one dice less than normal. Units attacking or battling into river hexes use normal rolls—foot units that are forced to enter via retreat (not evasion) river hex(es) lose 1 additional block total.
Hills: Level 1 and Level 0 Elevations: The map now, in effect, has contour lines of hexes showing different elevations. Basically there are two Terrain elevations in the scenario: Level 0: which includes all clear terrain and river tiles, and Level 1: which includes all Hill tiles. .
Elevation effect on close-combat and battle-back: If a unit is close-combating or battling-back against a unit at a higher elevation (or level) the “normal” maximum dice that unit may use is minus one (-1) normal. If a unit is close-combating or battling-back against a unit at a lower elevation (or level) the “normal” maximum dice is used. If both units are on the same level and there is no other terrain considerations the units would use their standard number of dice as dictated by the rulebook and these scenario rules.