“Strabo’s Vengeance”
The 2nd Battle of Asculum 89BC

Historical Background
On the northern front of the Social War in 89BC everything turned on the siege of Asculum. After the death due to illness of the local Roman commander Pro-consul Sextus Caesar, the author of the critical “Lex Julia” law on Italian citizenship, the new consul for that year Pompey Strabo took command at the scene and tightened the siege of the city. The Italians, for their part concentrated a large relief army to try to attack and break the Roman blockade. In the final battle before Asculum it is possible that some 60,000 Italians and 75,000 Roman-led troops participated. The Italians were completely defeated and the city finally fell mainly due to both starvation and despair. One force of Marsi from the relieving Italian army survived the rout, but was later cut to pieces by Strabo in a mountain pass. All the officers and leading men of Asculum were scourged and beheaded to avenge the original massacre of Roman citizens at that site when the Italian revolt was touched off in late 91BC. The rest of the ordinary free population was allowed to leave the city while their slaves and valuables were auctioned off. Consul Strabo kept the money garnered by the loot of Asculum to both pay his troops and to at least partly replace the sums he had originally expended to raise his private army at the start of the Social War. The Treasury of the Republic received none of the proceeds from the Consul of Rome. By the end of the year the war on the northern front had almost died out. Umbria/Picenum and the lands of the Marsi and Marrucini had largely returned to the fold of the Roman rule, and Silo, the Marsic Italian consul, had taken refuge with Samnites only to fall in another final doomed battle in the following year (88BC). 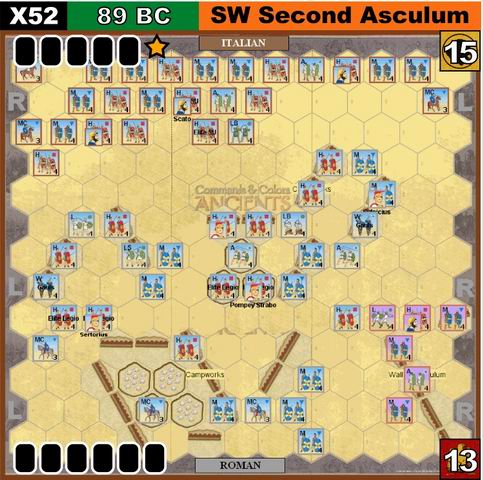 Leader Command & Rally Special Rules:
All Leaders may cancel a retreat or a sword hit if present with the unit.
Strabo may cancel both a retreat and a sword hit if present with the unit.
Units on both sides involved in close combat with the support of a Leader may only count one helmet hit amongst those rolled to inflict a hit on an opposing unit. Exception: Roman units supported by Strabo, and Italian units supported by Scato, may count up to two helmet rolls as hits in a single close-combat or battle-back. Units and the Rally Card: No unit can be rallied to beyond its strength at the start of the scenario. If a Player rolls “swords” when attempting to rally he may freely chose which unit gets a block back.
Reduced Missile Range & Auxillia Skirmish Special Rules:
a) Light Archers & Light Slingers only have a range of 2 hexes in this scenario—and may missile fire at adjacent enemy units.
b) Auxillia, Light Cavalry, & Light Infantry only have a range of one hex in this scenario—and may missile fire at adjacent enemy units.
c) An ordered unit may either missile fire or conduct close-combat in a player-turn—never BOTH.
d) Auxillia from BOTH sides may evade if attacked by enemy Medium or Heavy Infantry. Use normal evasion rules otherwise.
Line Command Special Rules: Due to the vast size of this battle neither side may order more than eight units per player-turn with a Line Command Card.

Asculum Garrison Force Retreat/Evade Special Rules:
. Asculum Garrison force units and the Asculum Garrison Legate retreat/evade on Flag & other results only towards the side edge of the extended two maps where the Walls of Asculum are located per the three-hex retreat compass directions laid out in the two examples below. Scato relief force Italian units/leaders retreat/evade normally towards their edge of the map per the normal rules.
Examples: #1 The Asculum Garrison Legate leader was with a Medium Infantry unit that was eliminated in B11 Map 1 and survived his Leader evasion roll. He may evade initially into hexes A12, B12, and C12 on Map 1 per the three hex retreat compass and continue on in the same directions as the Italian player wishes
#2 An Asculum Garrison force Heavy infantry unit is forced to retreat one hex from hex C9 Map 1 after coming under close-combat attack from C8—it may retreat into hexes D9, C10, B9 per the three hex retreat compass if those hexes contain no friendly or enemy units.

Roman Army Special Rules:
Roman Elite Slingers:
The sole Roman Slinger unit hits on swords when executing missile fire against Italian light foot units & also hits on swords when battling-back in close combat against any Italian unit.
Roman-allied Gauls:
Both of the Roman Warrior units are allied Gauls. When reduced to two blocks they no longer are granted an automatic Momentum attack option when clearing a hex of enemy unless they are stacked with a Roman Leader.