Social War: The Battle of Acerrae: 90 BC

Historical Background
“Gaius Papius had Nola betrayed to him and made an offer to the Romans of the town, who numbered 2,000, that if they changed their allegiance they could serve under him. Papius took into his army those who changed sides, but their leaders would not accept the offer and were taken prisoner and starved to death by him. He also captured Stabiae and Minervium and Salernum which was a Roman colony and enlisted prisoners and slaves from those places. When he burnt all the land encircling Nuceria, the neighboring towns were panic-stricken and came over, and when he asked for forces they provided about 10,000 infantry and 1,000 cavalry. After this he took a position menacing Acerrae. Sextus Caesar reinforced his army with 10,000 Gaulish infantry and Numidian cavalry and infantry from Mauretania and marched to Acerrae; but Papius brought Oxyntas, the son of Jugurtha who had once ruled Numidia, from Venusia, where he had been held under arrest by the Romans, dressed him in royal purple, and kept displaying him to the Numidians in Caesar’s army. When a large number of them deserted en masse…Caesar sent the rest of the Numidians back to Africa as unreliable. Papius then contemptuously engaged him and had already broken down part of the fortifications of Caesar’s camp, when Caesar sent out his cavalry by another gate and killed 6,000 of Papius’ men… (Chapter 42 Book1 from Appian’s Civil Wars) 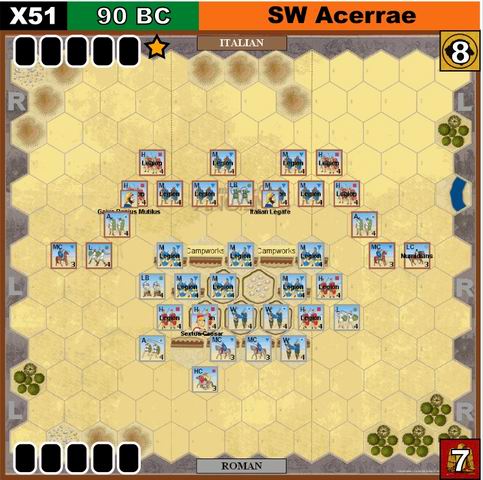 Important !! Neither side may start the game with Line Command Cards in hand.

Special Scenario Rules:
Command Rules:
The “Marian” Command Card Deck
Historical Note: Combat in the 1st Century BC between Roman/Italian Legions was somewhat different than the wars between civilized states in the 3rd Century BC. There was less room for combined arms tactics and maneuver, and battles probably tended to be more of the nature of hand to hand full bore slugfests.
This particular scenario utilizes a different Command Card Deck than the original C & C Ancients Deck. Eight (8) Cards are removed from the original deck leaving 52 Cards for scenario play. This new deck is called the “Marian Deck” and it is named after Caesar’s
uncle Gaius Marius, a general in the Social War, and a reorganizer of the Roman Legions in circa 105-103BC (several years before Caesar was born) to meet the challenges of the Germanic Tribal invasions that threatened the Roman Imperial Republic of the time.
The following eight cards are removed before play and put aside to create the Marian Deck:
X4 “Order Light troops”, x1 “I Am Spartacus”, x2 “Move-Fire-Move”, x1 “Mounted Charge”---note that one Mounted Charge” card is still retained in the deck.

Leader Command & Rally Special Rules:
All Leaders may cancel a retreat or a sword hit if present with the unit.
Units on both sides involved in close combat with the support of a Leader may only count one helmet hit amongst those rolled to inflict a hit on an opposing unit. Units and the Rally Card: No unit can be rallied to beyond its strength at the start of the scenario. If a Player rolls “swords” when attempting to rally he may freely chose which unit gets a block back.
Reduced Missile Range Special Rules:
a) Light Archers only have a range of 2 hexes in this scenario—and may missile fire at adjacent enemy units.
b) Auxillia & Light Infantry & Numidian Light Cavalry only have a range of one hex in this scenario—and may missile fire at adjacent enemy units.
c) An ordered unit may either missile fire or conduct close-combat in a player-turn—never BOTH.
Use of the Initial Roman “Mounted Charge” Card: During the first three Roman Player-turns the initially held Roman “Mounted Charge” Command Card may not be played.

Roman Pilum:
Each Roman/Italian Legionary Infantry unit starts with a Pilum Marker. The Pilum is a one-time use weapon that is generally fired right before a Roman/Italian Legionary unit attacks in close-combat or is itself attacked by the enemy in close-combat. Once the pilum is fired (or lost see below) –the Pilum marker is removed from the Roman unit to
indicate that the pilum has been expended and the unit may not throw Pilum for the rest of the battle.
Just before a Roman/Italian unit with pilum is attacked or is itself attacked by the enemy for the very first time in the battle in close-combat it throws its pilum—roll one die and apply normal hits for swords, color, or a Flag/retreat hit Afterwards remove the Pilum marker. The act of throwing the pilum is not considered to be part of the Close-Combat—so any result of the pilum throw is resolved before the Close-combat. If two Roman Legionary Infantry units that have not thrown pilum yet engage the attacker resolves his pilum throw first. An attached Leader may use his special ability to cancel a “swords” hit that was inflicted via a pilum hit (see special Command rules) on the unit he is stacked with.
Roman/Italian Legionary units, adjacent to the enemy, that have not expended their Pilum may also be ordered to throw Pilum if the card “Darken the Sky” is played by their commanding player. The Player picks one adjacent enemy unit and throws two dice –apply the results just as one would before close combat—and remove the Pilum Marker.