Historical Background
For centuries, Rome and Parthia contended for dominance in the Middle East. Nisibis 217 AD was a three-day battle with the Romans led by their new emperor Marcus Opellius Macrinus against the Great King of Parthia, Artabanus IV. On the first day, the battle began when conflict arose among the soldiers for possession of a watering place. Macrinus deployed his Romans in their typical formation, infantry in the center and cavalry at the wings. The formation also had gaps in the line to allow the light infantry to skirmish forward and withdraw to safety when necessary. The Parthian army was strong in cavalry and horse archers, and at sunrise the cavalry charged firing volleys of arrows while the cataphract cavalry and cataphract camels attempted to close with the Roman line. But, when the Roman light infantry evaded, they strew the ground with caltrops (spiked balls) and the pursuers found themselves in a difficult situation. After several such assaults and night drawing near, both armies retired to their camps. The second day was a repeat of the first day, with skirmishing from morning to night but again no clear advantage to either side. On day three, the Parthian army attempted to use their greater numbers to surround the Romans. The Romans succeeded in extending their line using the light cavalry and light troops to protect their flanks. By the end of the third day, both armies had suffered severely and were exhausted. Under these circumstances, Macrinus opened negotiations with Artabanus and bought peace with some territorial concessions.
The stage is set. The battle lines are drawn and you are in command. Can you change history? 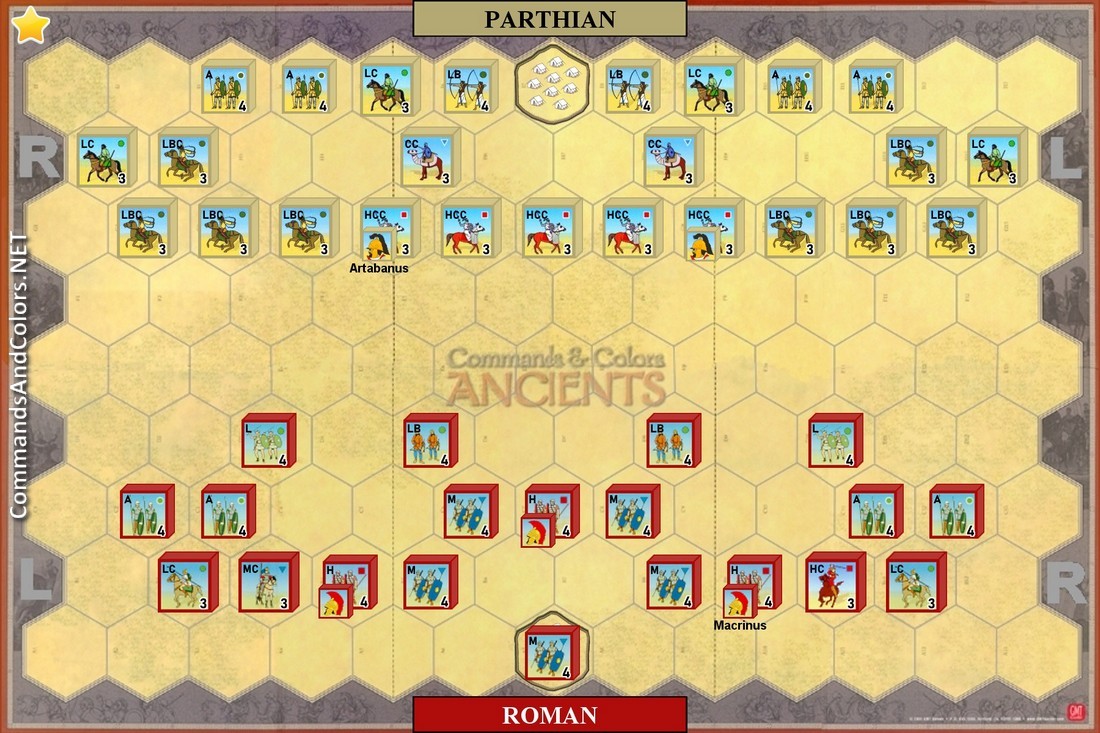 Special Rules
Julian Legions rule is in effect for the Romans.

When a unit occupies an enemy camp hex at the start of the owning player's turn, remove the camp terrain tile and collect one Victory Banner.

We suggest that Nisibis 217 AD be played as a Para Bellum system game series.

Mark-McG replied the topic: #1839 5 years 6 months ago
Nothing quite as useless as Line Commands and Double Time cards for the Parthian player.
Read More...