Historical Background
Along with Pompey and Julius Caesar, Marcus Licinius Crassus formed the secret “Triumvirate” which all but controlled Rome. Reputedly the richest man in Rome, Crassus lacked any great military achievement to compare with Caesar’s conquest of Gaul and Pompey’s many exploits. An ambitious man, Crassus saw the conquest of the Parthian Empire as his opportunity to match or surpass his colleagues in glory. Crassus arrived in Syria with seven legions and 4000 cavalry and marched directly through the desert towards the Parthian heartland. Shortly after crossing the Euphrates, his army was surprised near Carrhae by the Parthian general Surena and a cavalry force made up of horse archers and cataphracts. Crassus formed his men into an open square, but Surena made no effort to close, content to harass the Romans with a hail of arrows.
Crassus and his officers believed they had only to hold out until the horse archers expended the small number of shafts they could carry with them. However, Surena had brought along a camel train with a huge re-supply of arrows. Crassus sent his son Publius forward with the Roman cavalry to pin down the horse archers but the Parthians fell back. Publius rashly pursued too far and Surena annihilated his force. Publius’ head was carried back to the Romans upon a spear to taunt his father. This broke the spirit of Crassus and the Roman soldiers, throats cracking with thirst, were overwhelmed. Crassus withdrew with a mere 500 survivors westward when the Parthians retired for the night. During negotiations following the fight, Crassus was treacherously captured. Surena had heard that the Roman commander thirsted for wealth, so he had Crassus executed by pouring molten gold down his throat. Most of the legionary eagles were captured by the Parthians, a disgrace that would rankle the Romans for years to come.
The stage is set. The battle lines are drawn and you are in command. Can you change history? 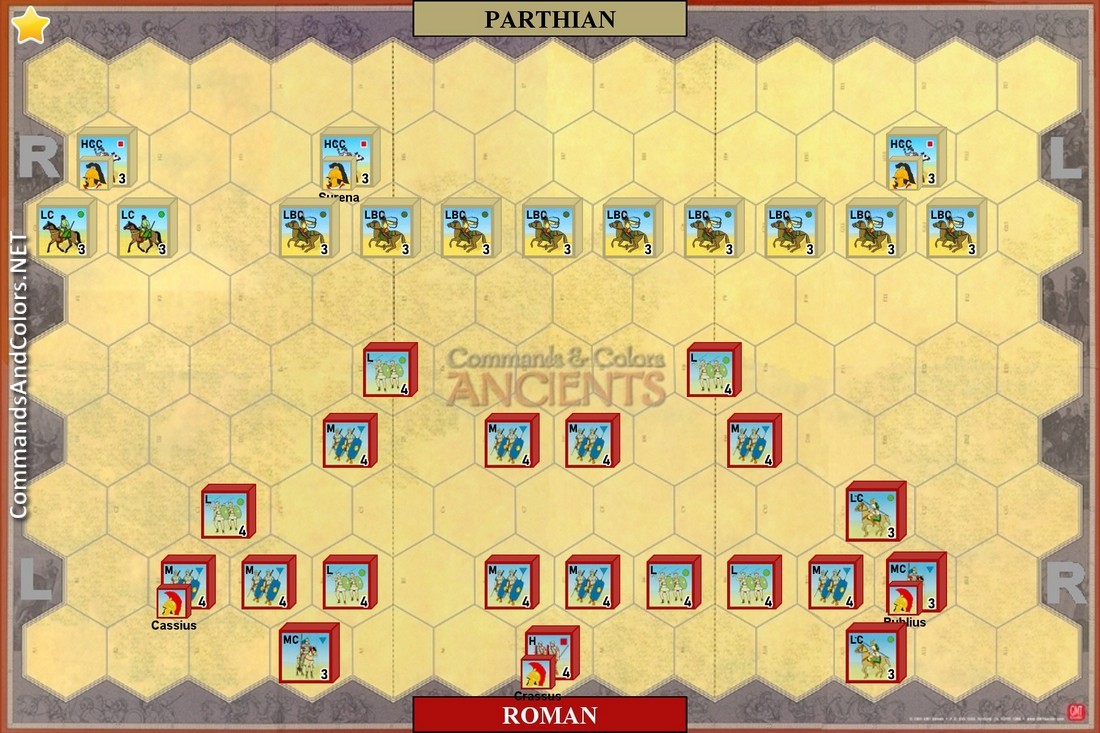 GF1954 replied the topic: #3872 1 year 2 months ago
2 solitiaire, with the Parthians winning both, 7 - 2, and 7 - 4. The cataphracts were the difference in both games.
manassas7509 replied the topic: #3343 2 years 1 month ago
Lost as the Romans yesterday 7-2. I never picked up any cards that move infantry far and fast and it seems like without those the Romans are doomed. It surprises me a little that the plays here break about 50-50. I can see the Romans having some success with a handful of Line Commands, Double Times, etc. but with only four command cards that would seem a rare occurrence. Then there's always the possibility my tactics were poor!
esparver73 replied the topic: #2679 3 years 9 months ago
Tight scenario won 6-7 by the Romans. The Parthians started well and pounded the Romans with arrows and clased on them with the Cataphracted Cavalry, evading when needed and causing many Roman casualties, but then the Romans managed to close in with the medium infantry, the Parthians got nervous and started to close combat with the light cavalry and archers, which doomed them for their harsh retreating ranges, leading to a defeat.
Read More...