Historical Background
At the beginning of 54 BC, Marcus Licinius Crassus had just finished serving his joint-consul year with Pompey. Crassus felt a great desire to add new glory to his name. He had seen no action since his defeat of Spartacus nearly 20 years earlier, and almost none before that with the exception of the battle of the Colline Gate. Crassus had been given control of the province of Syria. Crassus decided on an invasion of Parthia and was encouraged by Julius Caesar to do this although most of the senate where against the war. Parthian king Orodes II divided his army and he took most of the soldiers, mainly foot archers with a small amount of cavalry, to punish the Armenians and sent the other half, which were entirely cavalry units, to scout out, delay, and, if possible, destroy Crassus. This Parthian army was under the command of general Surena. The two armies clashed near the town of Carrhae. Though demoralised by the hot climate, Crassus' troops heavily outnumbered the Parthians.
The Parthian force was campaigning in Armenia while a large cavalry force intercepted Crassus at Carrhae. The Roman Cavalry commanded by Crassus’s son Publius where screening the armies advance when they where attacked by the Parthian heavy cataphracts surrounded and destroyed Publius was killed in the fighting. While meanwhile the horse archers surrounded the Roman infantry, taunting them. Crassus immediately formed his legionaries into a large, hollow square to prevent them from being outflanked. After several hours, the legionaries began to collapse from heat exhaustion and thirst as well as to the constant stream of missiles. The Romans were completely surrounded. The testudo formations were holding up well though, but the testudo was very poor in hand-to-hand combat. This factor inspired Surena to charge. The cataphracts' charge split the Roman army, and the Roman soldiers began to rout. Crassus was able to withdraw, but he had to leave behind thousands of wounded, who were executed by the Parthians. Surena then offered to have peace negotiations with Crassus. Crassus's men heard of this and threatened to mutiny if Crassus did not accept. Crassus was forced to attend, and he was killed. It was one of the greatest defeats Rome would ever suffer, with about 20,000 soldiers dead, and half again as many captured. The Parthians suffered light casualties. Gaius Cassius Longinus, a legatus under Crassus, led approximately 10,000 surviving soldiers from the battlefield back to Syria, where he governed as a proquaestor for two years, defending Syria from Orodes II's further attacks. He would eventually defeat the Parthians and receive praise from Cicero for his victory.
The stage is set. The battle lines are drawn and you are in command. The rest is history. 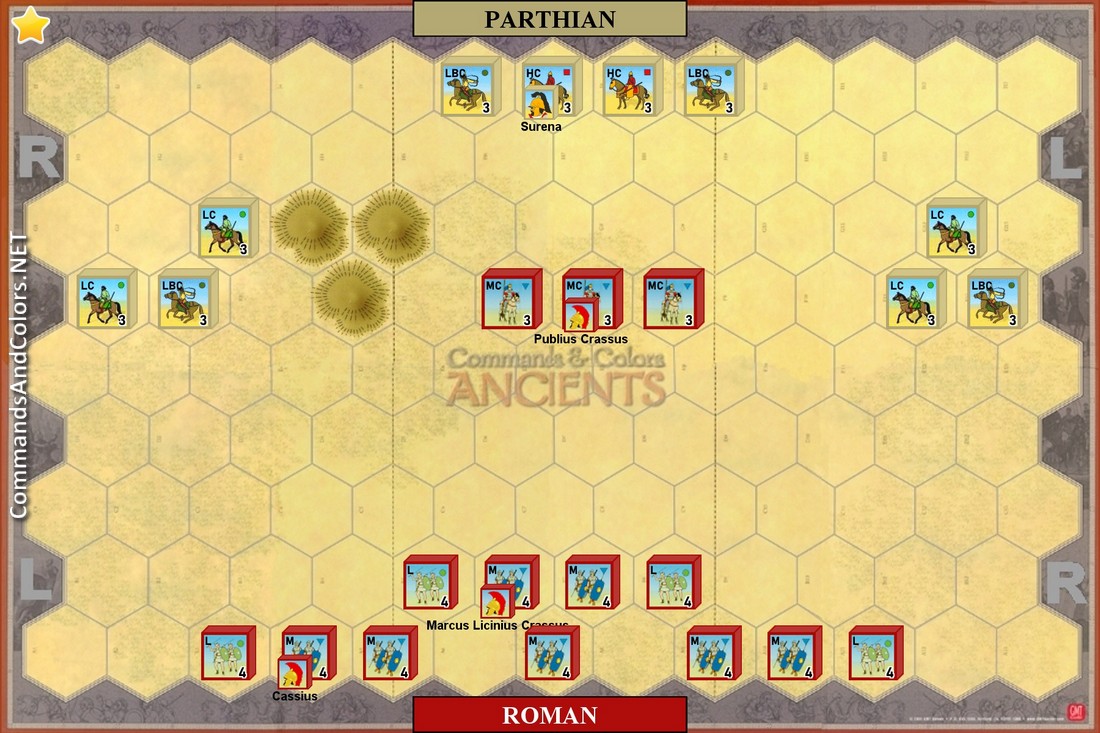