Historical Background
During a failed campaign against the Parthian Empire, Emperor Caracalla was murdered shortly before the indecisive battle of Nisibis in 217. Macrinus, the architect of the assassination, proclaimed himself emperor and ascended to the throne, engineering a peace settlement with masive reparations to Parthia. However, the  new emperor’s popularity soon plummeted due to both controversial reforms and secret political machinations by his enemies designed to bring Elagabulus, purported illegitimate grandson of Caracalla, to the throne. Soon turning into a full-blown rebellion based in Syria, Roman army units (including the Legio III Gallica) defected and proclaimed the 14-year old usurper as emperor. The rebel army marched on Macrinus’ forces at Antioch, and the two sides met in battle a short distance from the city.
Fought on June 8, 218 CE, it was by all accounts a fiercely contested battle, one that seems to have been dramatically influenced by extraordinary performances from, of all things, non-military personnel on the rebel side. Gannys, the eunuch tutor of the youthful Elagabulus, commanded the rebels courageously and ably though possessing no prior military experience, while Elagabulus’s mother and grandmother personally rallied broken rebel troops who had run from the fighting. Despite the initial success of the Praetorian Guard in breaking the rebel lines, Macrinus himself lost his nerve and fled the battlefield at a pivotal moment, as Elagabulus (according to Dio) was “dashing along on horseback, almost godlike, sword drawn” and rallying his own troops to victory.
Macrinus was executed in Cappadocia while attempting to escape in disguise back to Rome, thus officially ending his tumultuous 14 month reign. Elagabalus claimed the throne, yet his scandal-filled term fared little better, as he was assassinated by the Praetorian Guard in 222 and (like Macrinus) had his memory officially condemned by the Senate.
The stage is set. The battle lines are drawn and you are in command. Can you change history? 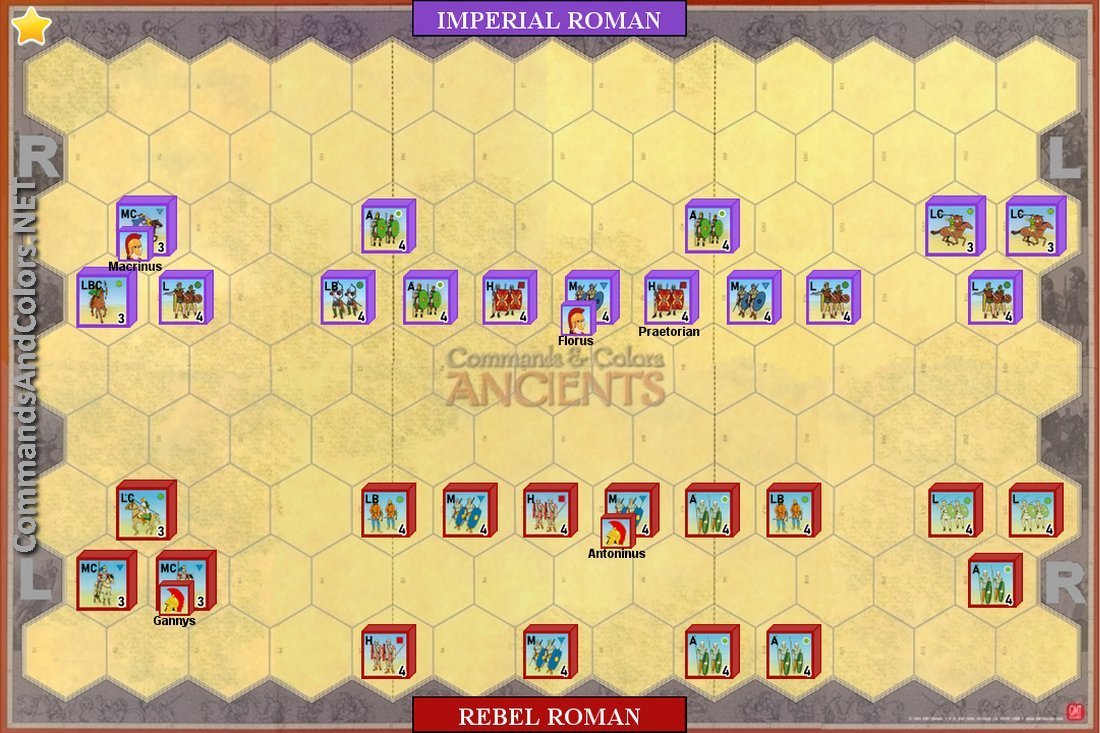 > Imperial Legions rules are in effect for both armies

> Due to the heroic efforts of Antoninus' grandmother (Julia Maesa) and mother (Julia Soaemias), both of whom personally dismounted from their chariots and rallied broken units at a pivotal point in the battle, rebel units may ignore one flag on its baseline hexes (center section only), and roll two extra dice if the Rally Card is played.