Historical Background
"And when I was first established over the dominion of the nations, the Caesar Gordian from the whole of the Roman Empire and the nations of the Goths and the Germans raised an army and marched against Assyria, against the nation of the Aryans and against us. A great battle took place between the two sides on the frontiers of Assyria at Meshike. Caesar Gordian was destroyed and the Roman army was annihilated. The Romans proclaimed Philip Caesar."
Inscription of Shapur at the Kaaba of Zoroastre, lines 6-9, from Res Gestae Divi Saporis.
While our reconstruction of the battle of Rhesaina relied on conjecture, there is at least no dispute it took place; meanwhile, the battle of Misiche is itself hypothetical. Roman sources tend to omit mention of the battle entirely, and the circumstances surrounding the death of Gordian III are shrouded in mystery--some sources indicate that he was murdered by a treacherous Philip the Arab and the mutinous legions, while others announce a more heroic death on the battlefield. Setting aside the effectiveness of Roman press censorship and the natural tendency of nations to celebrate their victories and overlook defeats, a possible middle ground might be inferred between Persian triumphalism over Misiche and Roman silence. This scenario posits that Misiche was less a frontal, pitched battle like Rhesaina, but rather an ambush which escalated into an encounter battle.
In 244, Gordian's exhausted troops are advancing along the Euphrates, deep into Persian territory, on approach to the Persian capital Ctesiphon. Though their campaigning over the last months had been successful, their commander, the Praetorian Prefect Timesitheus, had succumbed to illness, and the teenaged emperor had replaced him with the far less able and loyal Philip the Arab. Following his defeat at Rhesaina, a suitably chastened Shapur adopted a more cautious approach of shadowing and harassing the Roman invaders. Now, however, with the enemy approaching his capital and the seat of Sassanid power, he resolved to make a stand, and arranged to ambush Gordian's legions on the march, outside of Misiche, near modern-day Fallujah. Shapur concealed dismounted archers on heights overlooking the Romans' march route along the Euphrates, supported by levied Paighan light infantry. Mounted bowmen fanned out ahead of the Roman line, with instructions to engage and halt their vanguard. Meanwhile, the Persian main force, consisting of well-armed Daylani mercenaries, war elephants, and heavy Savaran cataphracts under the personal command of the king, assumed positions in the rear, preparing to fall on the Roman column and strike any targets of opportunity.
The tired Roman army, hauling its siege train for the anticipated assault on Ctesiphon, was unprepared for a fight. The Romans were in march formation, with less reliable auxilia sandwiched between legionary units, in order to discourage stragglers and desertion. The Sassanid archers held their fire as the marching columns plodded into range, having received strict orders not to shoot until Gordian's troops were strung out at the foot of their elevated position. Then, at a signal, trumpets blared, echoing along the ridgeline, and the unfortunate Romans were struck by an interrupted hail of arrows, throwing soldiers, horses and pack animals into panicked confusion. The young Gordian and his officers desperately fought to organize their men for unexpected battle, and the emperor showed admirable courage and presence of mind. He rallied the loyal men of the Praetorian Guard and Legio II Parthica to make a stand, and prepared to assault the formidable Persian position. Meanwhile, Roman engineers struggled to deploy their packed and disassembled war machines to fire back at their assailants. The Praetorian Prefect Philip, ostensible commander of the Roman force, was far to the rear with his cavalry escort, absent from the action.
The legionaries at the head of the Roman line locked shields and began to move deliberately up the slope towards the Persian archers, threatening to take the heights and reverse the entire course of the battle. However, just at this moment, a series of disasters unfolded. A stray Persian arrow struck down the Emperor Gordian, and he fell, mortally wounded. The fact could not be hidden from the men, and the demoralized Roman infantry halted their advance. Next, the Persian heavy cavalry, riding through a cloud of dust, and led in person by King Shapur, descended on the rear of the Roman column--the panicking auxilia and the baggage train. Not far behind loomed the unmistakable hulking forms of the elephants. The waves of cavalry crashed into the most vulnerable sections of the march column, causing entire cohorts and vexillations to collapse.
Hemmed in on all sides, the Romans hunkered down behind their shields and wagons, trying to form a protective barrier against the enemy, but they continued to suffer casualties from a relentless barrage of missiles and repeated charges by the Persian cavalry, who grew more reckless and confident with each attack. Amidst the chaos and slaughter, Philip finally emerged to assume command of his depleted army. Nightfall prevented the battle from turning into an utter rout, but it was evident to both sides that the Romans, exhausted, half-beaten, and surrounded deep in enemy territory, were in a desperate position. The following day, the hastily-proclaimed Emperor Philip rode out towards the Sassanid lines under a flag of truce in order to negotiate and buy peace from the victorious Shapur. In exchange for safe passage for the Roman army, Philip agreed to a staggering indemnity and sweeping territorial concessions that would erase the gains of the previous year, and lead to accusations of treachery. Yet the shaky peace would not endure, and Shapur would resume campaigning in the early 250s.
This scenario is the second battle in the Eagles in the Desert series. Many thanks to my good friend Elliott Becker who helped me design and playtest this scenario.
The stage is set. The battle lines are drawn and you are in command. Can you change history? 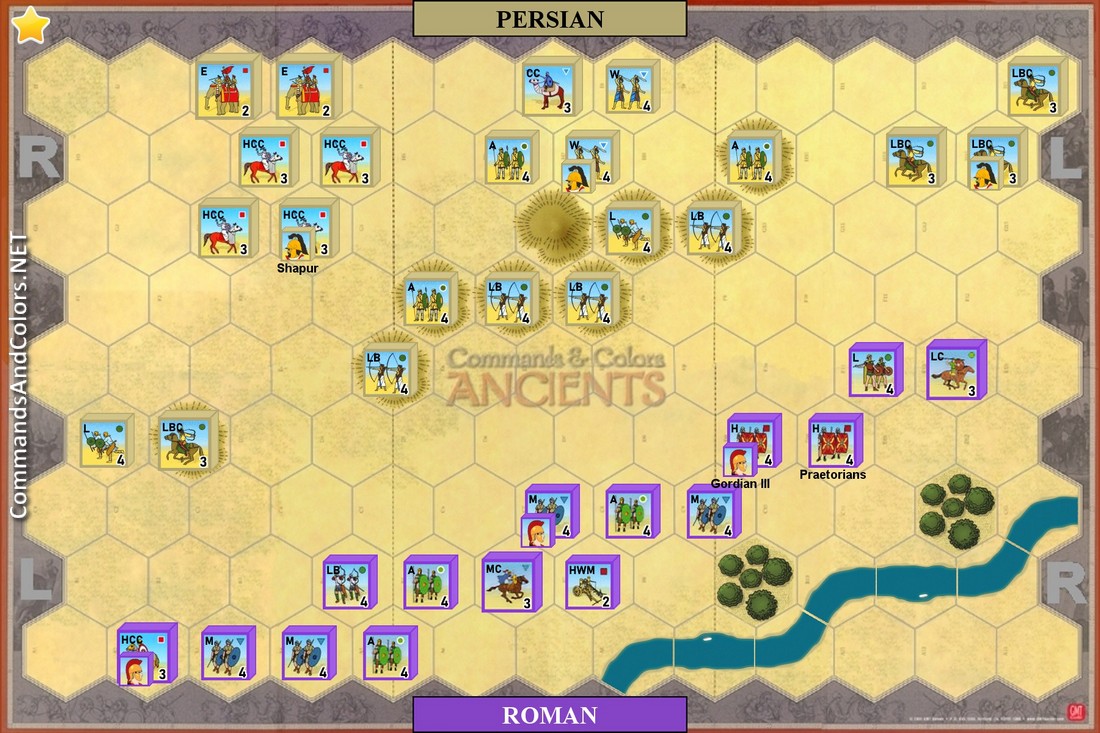 The Roman Heavy War Machine unit may not fire until turn 4.

The river is impassable.

Mark-McG replied the topic: #1836 5 years 1 month ago
for the sake of clarity, the river is impassable (the default).
www.commandsandcolors.net/ancients/the-g...ains/1070-river.html

Since it is the Euphrates river, this seems reasonable, and in keeping with the narrative text.