Historical Background
"Gordian, while still very much a youth, married Tranquillina in Rome, opened the twin gates of Janus and, setting out for the east, made war upon the [Persians] who were then planning to make an incursion. He conducted the war with success and made havoc of the Persians in great battles. ..." Eutropius, breviarum IX.
The battle of Rhesaina was fought in 243 AD near modern-day Ras al-Ayn, Syria, between the forces of the teenaged Emperor Gordian III and the recently-crowned King Shapur I. The Roman Army, commanded by the emperor's father-in-law, the Praetorian Prefect Timesitheus, was built around Legio II Parthica and the Praetorian Guard, which formed the core of Eastern field armies in the first half of the 3rd century. The Roman expeditionary force consisted mostly of well-equipped legionary infantry and supporting light troops, with a smaller contingent of mixed cavalry. Shapur confronted Gordian's legions with a formidable mix of Sassanid troops, consisting of excellent cavalry--heavily-armored Savaran cataphracts and fast-moving mounted archers--backed by massive blocks of levied Persian spearmen, allied Mesopotamian warriors, and an intimidating herd of elephants.
The Romans assembled in their traditional formation, heavy infantry in the center, auxilia and cavalry on the flanks, with skirmishers and lanciarii arrayed in front. Shapur, relying on battle-tested Persian tactics, ordered his mounted bowmen to harass the Roman cavalry, while the bulk of the cataphracts formed up for a sweeping charge through the Roman center. Shapur himself remained in the rear with the infantry levies, but kept his escort of elite Zhayedan cavalry and the elephants close at hand, in reserve. With the flanks engaged and the Roman skirmishers dispersed and distracted, the Persian cataphracts charged through a cloud of dust, wielding lances and war hammers; they slammed into the densely-packed legionaries along the entire length of the line, intent on quickly breaking the back of the enemy army. In many places the front rankers were overrun before they could even throw their pila. But Timesitheus, anticipating the violent charge, had assembled his men in a deep formation of multiple lines, which absorbed the shock of the cataphracts without buckling and breaking. The Persian cavalry pulled back, reformed, and launched three successive waves of attacks against the legionaries, but with their initial momentum gone, their weight slackened with each attempt. Trumpets along the line sounded a Roman general advance, and now it was Timesitheus' turn to press the Persian center.
Seeing that the flower of the Sassanid nobility and the core troops of his army had failed to achieve victory, Shapur reluctantly judged discretion to be the better part of valor, and retired from the field without committing his reserves, saving the remainder of his forces and avoiding capture or death in battle. His decision proved a wise one. Though the legions cheered a dramatic victory and spent the next year largely unopposed, smashing local garrisons and retaking captured territory, their final effort towards the Persian capital of Ctesiphon would meet with disaster at Misiche in 244, a defeat that left Gordian dead, the field army in tatters, and the Roman position in the East irrevocably shaken.
(The description of the battle is entirely conjectural).
This scenario is the first battle in the Eagles in the Desert series
The stage is set. The battle lines are drawn and you are in command. Can you change history? 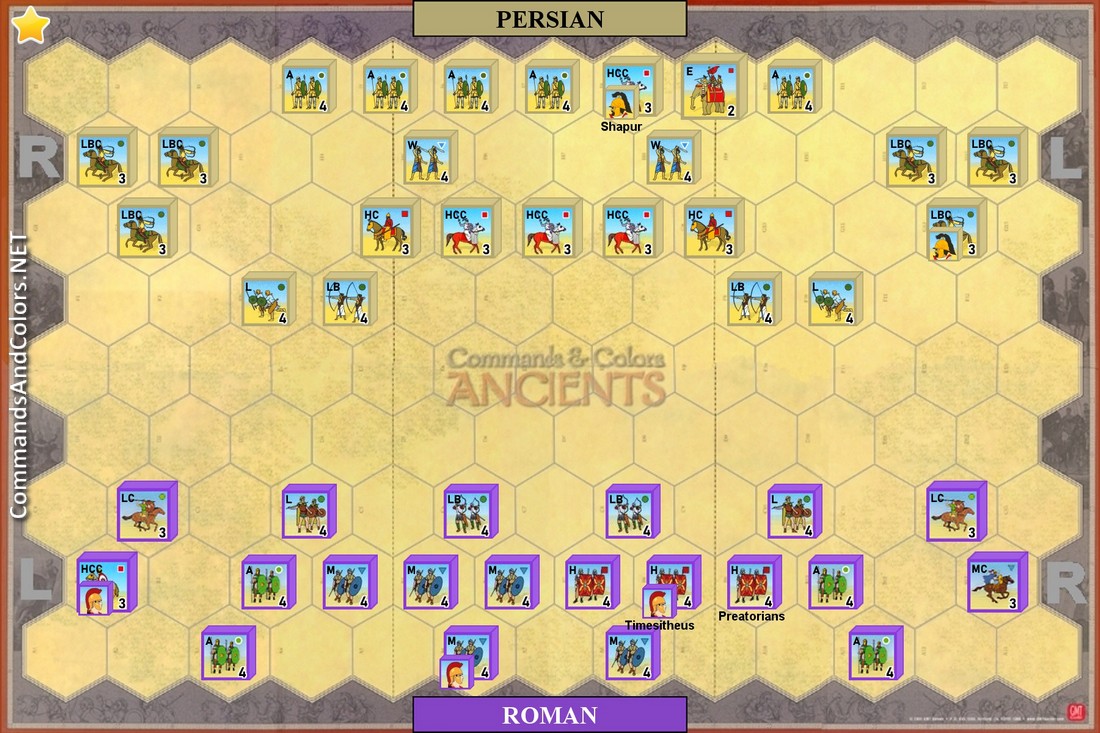 HERE you will find a complete list of all scenarios by Kirill Penteshin.

Mark-McG replied the topic: #1749 6 years 4 months ago
an interesting scenario, if weighted towards the Sassanids.
The Roman cavalry setup is tough to live through.
Read More...