Historical Background
The Germanic tribes of the Cimbri, Teutons and Ambrones were migrating south form northern Germany when in 113BC they entered the territory of the Taurisci to the east of the Alps. The Taurisci were friends of Rome, and appealed to them for help. Rome sent the Consul Gnaeus Papirius Carbo with an army to deal with the incursion. Carbo blocked an Alpine pass to Italy and so the tribes moved on. Carbo continued after them and so they nogotiated a safe passage away from the region led by guides provided by the Romans with instructions from Carbo to lead them into an ambush. The ambush went badly wrong though and the Romans suffered very heavy losses before the remnants were saved by a severe thunderstorm and darkness. The tribes then moved north west into Gaul before returning to Italy in 105BC for the Battle of Arausio. Nothing is known of the actual course of the battle. I have depicted the Romans as deployed on both sides of a wooded valley, ready to pounce on the ponderous Germanic column of warriors, baggage, women and children. I have assumed that the Germans have somehow become aware of Carbo's plan and so when the Romans catch sight of the approaching horde, they are not disorganised, but are in fairly good order with scouts and patrols roaming ahead.
The stage is set. The battle lines are drawn and you are in command. Can you change history? 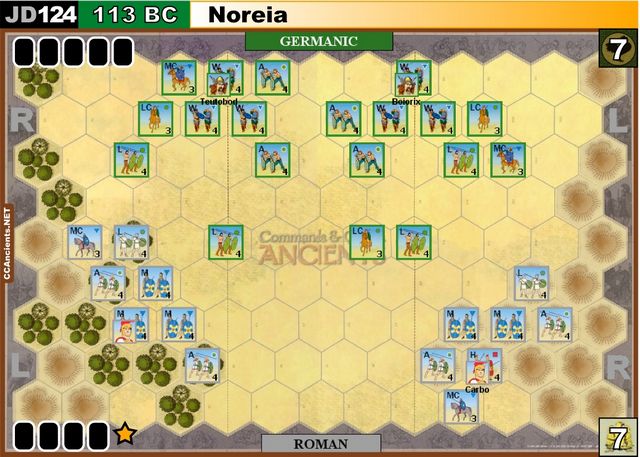