Historical Background
The Battle of Noreia in 112 BC, was the opening action of the Cimbrian War fought between the Roman Republic and he migrating Proto-Germanic tribes the Cimbri and the Teutons (Teutones). It ended in defeat, and near disaster, for he Romans.
Prelude
The Cimbri and Teutones left their home lands around the Baltic sea in the Jutland peninsula and Southern Scandinavia. They travelled southeast and encountered the Scordisci with whom they fought. Following their victory over the latter, they arrived at the Danube in Noricum (113 BC) which was home to the Taurisci, allies with Rome. Unable to repel these new invaders, the Taurisci appealed to Rome for assistance. The consul Gnaeus Papirius Carbo responded the following year, leading the legions into Noricum, where he took up a position on the heights near Aquileia.
Battle
Carbo ordered them to vacate the territory of the Taurisci at once. The Cimbri had heard many stories from other tribes about the fearsome power of Rome, and after seeing the size of the Roman army and the strength of its position, they complied. However, Carbo was not going to allow enemies of Rome (nor an opportunity to gain a triumph) to escape. He had sent guides, to escort the Cimbri and Teutones to the frontier, instead they were going to lead them into an ambush the consul had prepared. But somehow, perhaps due to being warned by their scouts or spies or possibly due to the treachery of one of the guides, the Proto-Germanic people, became aware of Carbo's plan and, according to Theodor Mommsen: "an engagement took place not far from Noreia in the modern Carinthia, in which the betrayed gained the victory over the betrayer and inflicted on him considerable loss; a storm, which separated the combatants, alone prevented the complete annihilation of the Roman army."
Aftermath
Carbo managed to escape with his life and the remnants of his army (though the Germanic tribesmen had erroneously thought and boasted that they had caught and slain their betrayer). He was disgraced and impeached as consul by the senate, but was not exiled as was customary treatment for defeated and disgraced commanders. Rome prepared for the worst, but instead of invading Italy the Cimbri and Teutones headed west, towards Gaul. There, in 105 BC, at the Battle of Arausio, another, larger, Roman force would not be as fortunate as Carbo's legions.
References
Theodor Mommsen, History of Rome, Book IV-The Revolution pg 67.
R. Ernest Dupuy, and Trevor N. Dupuy, The Encyclopedia Of Military History: From 3500 B.C. To ThePresent. (2nd Revised Edition 1986) pp 90-91.
Retrieved from "http://en.wikipedia.org/wiki/Battle_of_Noreia"
The stage is set. The battle lines are drawn and you are in command. The rest is history. 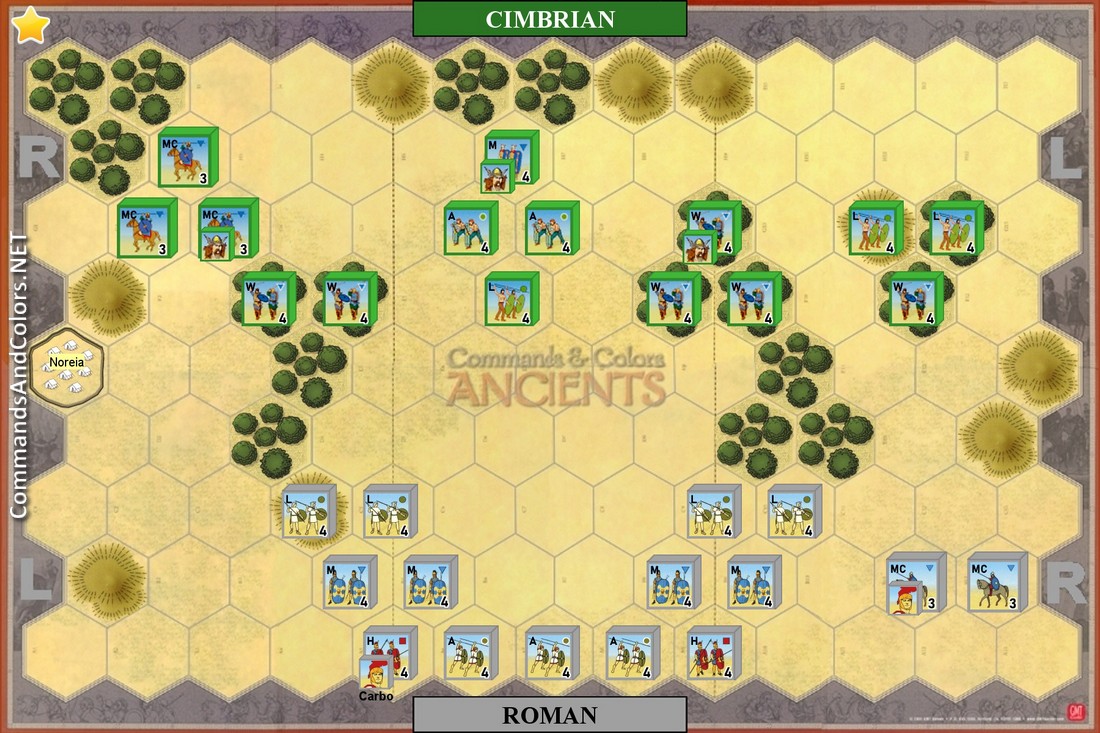