Historical Background
Following the disaster at Aruasio in 105 BC, Rome elected Marius as Consul to deal with the emergency. He was granted a reprieve as the Teutones and Ambrones decided to invade Spain rather than Italy, and spent the years 104-103 reorganizing the Roman army. Then in 102 BC, the Germanic tribes once again moved toward Rome. They reportedly numbered over 110,000 men, but half that number is a more likely estimate. Marius crossed the Alps with an army of over 40,000 legionnaires and Ligurian auxiliaries and set up camp near the coastal route being followed by the Teutone and Ambrone tribes under their King Teutobodus. Marius allowed the two tribes to pass and then followed them until they came to Aquae Sextiae. He occupied the high ground in view of the enemy, after posting an ambush force under Marcellus. Hostilities began almost immediately. The tribes charged up the hill but the terrain was in the Roman favor and they forced back the barbarians. At this time Marcellus’ ambush force appeared, and charged into the enemy rear. The entire horde broke and fled. Tens of thousands of the barbarians were slain, and many captured, including Teutobodus. Hundreds of the Germanic women committed mass suicide rather than become slaves of Rome.
The stage is set. The battle lines are drawn and you are in command. The rest is history. 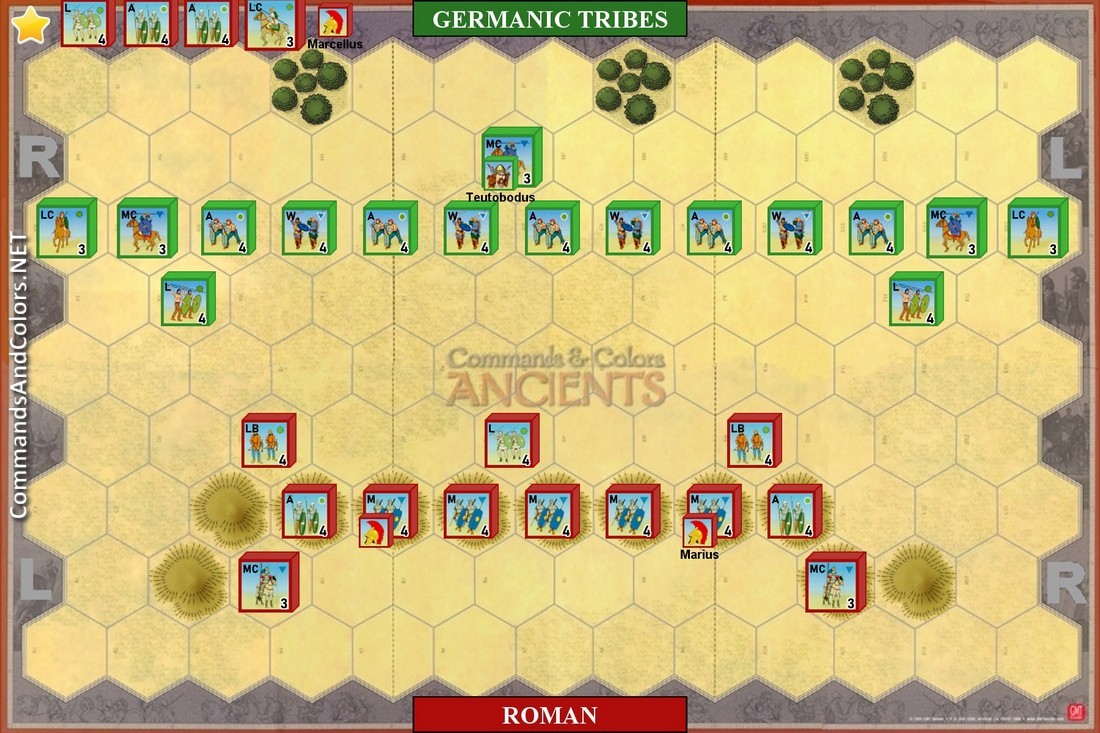 Special Rules
• Marcellus’ ambush may be ordered by playing a ‘Leadership’ or an ‘Order Light Troops’ Command card. When playing an ‘Inspired Leadership’ card, the force enters in the section noted on the card. When playing a ‘Leadership Any Section’ or ‘Order Light Troops’ card, the force enters in the section of Roman player’s choice. When ordered, set the units on the baseline hex, which counts as one hex of the units move. Marcellus may be placed with any of these units. Should these Roman units have to retreat, they must retreat toward the Roman side of the battlefield.

clavain replied the topic: #4202 6 months 2 weeks ago
6-3 Germans. Ambush came on early on the German left, and I had the cards to isolate it, cut it off and destroy. German cav moved up on both wings and did enough damage for the win before the Roman main line could engage (I did not try to approach it).

Andygor replied the topic: #3164 2 years 9 months ago
Played today in club this scenario two times. Playing for the Germanic tribes, won 6: 2, despite the introduction of ambush Marcellus in the game on my left flank. Playing for Rome, won with the score 6: 3, activating the ambush of Marcellus on the last move, and destroying two troops auxilia with Marcellus as commander of the detachment of the German cavalry, and tore Teutoboda. Playing for barbarians, not gave opportunities use Romans rule Marius, to they weakened my teams warriors, playing for Romans also not was able use this advantage. The game was interesting!
Novak replied the topic: #2156 5 years 1 month ago
6-3 Roman victory. The game was decided when Marcellus' ambush force appeared on the Gaul left flank and killed three already damaged units. Fast game. I think the only way for Gauls here to have a chance would be to get to the high ground as fast as possible. Other consideration would be to smash reinforcements since it's green units - but then again a good Roman player won't give you much of a chance for that.
Read More...