Historical Background
Following the Punic Wars, Rome set out to consolidate the territories it had captured beyond the Alps. At the same time a major migration by the Cimbri, Teutons and Ambrones under the Kings Boiorix and Teutobod was moving south, reportedly with over 200,000 men (a great exaggeration, more likely the fighters numbered about 50,000). Two Roman armies were sent to stop this migration with nearly 80,000 legionnaires. However, bitter differences between the Consul Gnaeus Mallius Maximus and the Proconsul Quintus Servillius Caepio prevented the two Roman armies from cooperating, with devastating results. The Roman forces were camped by the Rhone River, near Arausio (modern Orange). However, the armies did not camp together. Caepio pitched his tents closer to the enemy, and his dispositions are shown on the battlefield (Maximus and his army have made camp off map). The sight of two Roman armies made Boiorix cautious, and he entered into negotiations with Maximus. Caepio, motivated by hatred and envy of Maximus, foolishly launched an attack on the barbarians. Caepio’s army was annihilated due to the hasty nature of this piecemeal assault. With a boost in confidence from this easy victory, the barbarians proceeded to advance, pin Maximus’ army against the river, and destroy it also. It terms of human lives lost, Arausio was among the most lethal battles in world history, and Rome’s worst defeat since Cannae. The terrible defeat had one beneficial result for Rome. It gave Gaius Marius the opportunity to come to the fore and radically reform the organization and recruitment of Rome’s legions.
The stage is set. The battle lines are drawn and you are in command. The rest is history. 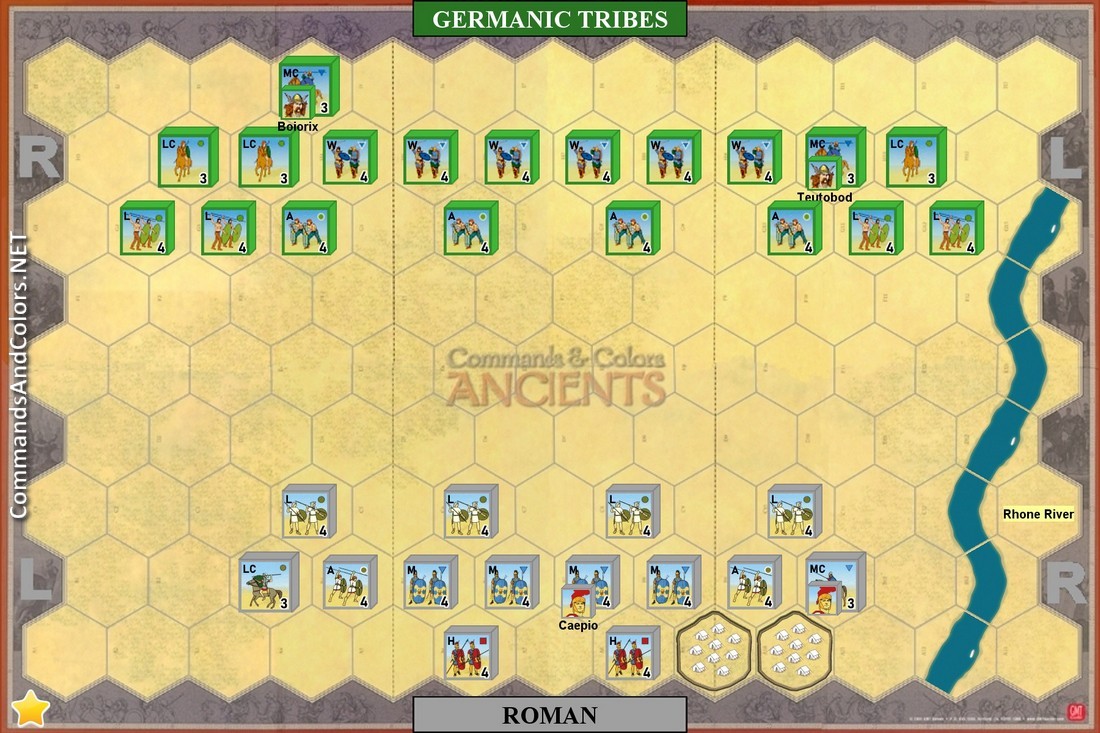 • Optional set-up. The Roman Army was still organized along pre-Marian guidelines. If the Roman player desires, he may use the gray Roman blocks from the basic game when placing.

GF1954 replied the topic: #3707 1 week 6 days ago
2 solo, with the Germanic Tribes winning both 7 -6, and 7- 3. In the first, the Romans came at the tribes, and it was a very close affair. I thought that was the best approach for the Romans, insteading of waiting for the tribes. And they had a lot of luck with the dice rolls. Not in the second game. The warriors showed who was boss.
Valvorik replied the topic: #2077 3 years 7 months ago
So two solo plays, Rome 8-5 and Rome 8-2. Getting their heavy foot up counted significantly each time, Clash of Shields at right time first time, some good luck 2nd time (both armies had a fair number of weakened units, it came down to right cards to exploit other's).

Tuscan-Centurion replied the topic: #867 10 years 6 months ago
Being one of 6 players King Billy refers to here I have to agree with his comments.
I lost my first game as the Romans after the Barbarians took the camp. In the replay where we swapped sides the Barbarians won again but only after the warriors smashed the Roman centre to gain the required numbers of banners.

The EPIC version of this scenario gives both sides a bit more flexibility but the same comments apply. Once those Barbarian warriors get into it it becomes a blood fest. All good fun though.

King-Billy replied the topic: #857 10 years 6 months ago
We had a huge day today, playing no less than 7 games between 6 players. All but one of them featured Romans V Barbarians.

We played Arausio three times, with the Germans winning all three. We all agree that it is a bit hard on the Romans, but certainly not impossible.

The games went G7-R4, G7-R4 and G7-R6. The lack of Roman cavaly counts, as does the need to prevent the Germans getting into the camp. I lost as the Romans and won as the Germans.

The best tactic for the Romans is to set a line and let the Germans come at you.

The six Warrior units are powerful for the Germans. Make the most of their ability to move two hexes and battle, and to battle advance.
Read More...