King Jugurtha of Numidia vs Consul Metellus of Rome

Scenario notes: Muthul was a large disjointed battle between two very different styles of classical ancient combat—the light dispersed skirmish Numidian methods vs. the heavy line based regular order and disciplined Roman techniques. The battle utilizes a double size play area allowing the Numidians the space and more importantly the depth in which to implement more fully their typical tactics.

Historical Background
“The rear of Metellus’s column suffered heavy casualties, and both flanks were harassed by mobile assailants who pressed home their attacks and spread general confusion in the Roman ranks. For even the men who resisted with the most dogged courage were disconcerted by this irregular manner of fighting, in which they were wounded at long range without being able to strike back or come to grips with their foe. Jugurtha’s horsemen had been given careful instructions beforehand. Whenever a squadron of the Roman cavalry began a charge, instead of retiring in a body in one direction, they retreated independently, scattering as widely as possible. In this way they could take advantage of their numerical superiority. If they failed to check their enemy’s charge, they would wait till the Romans lost their formation, and then cut them off by attacks in their rear or on their flanks; and when any of the Numidians found it more convenient to retreat to the hill than to keep to the plain, their horses, being used to the ground, made their way easily through the thickets, while ours were impeded by their inexperience of such rough country.”

“The whole engagement presented a changeable and indecisive aspect, such as could not but arouse feelings of horror and pity. Separated from their comrades some retreated, while others pursued the enemy. Without any attempt to keep close to the standards or preserve formation, each man stood his ground where he found himself in danger and tried to defend himself. Arms, missiles, horses, men-enemies and friends-were all mingled in confusion; without a plan or command, everyone acted at random. Consequently, at a late hour the outcome was still in doubt…”

(And for a more contemporary condensed look at the battle we have the Muthul account from John Drogo Montagu’s most excellent ancient battle resource work:  “Battles of the Greek and Roman World” below. His account also uses Sallust as its primary source)

“When Metellus assumed command in Numidia his first task was to restore discipline and morale among the troops. Then he initiated a campaign of attack against Jugurtha’s towns. Jugurtha noted his line of march towards the river Muthul, and got ahead of him. About 20 miles from the river and parallel with it there ran a range of barren hills from the middle of which projected a long spur populated with trees and tickets. The plain below was waterless as far as the river. On the spur Jugurtha positioned his men and elephants in an extended line. Metellus was unaware of the ambush until he had descended the hill, when he saw the enemy. Fearing the effects of thirst during prolonged skirmishing in the plain, he sent his lieutenant Rutilius Rufus ahead to the river with light troops and cavalry to seize a position for a camp. Meanwhile, Jugurtha sent a force to block the track down the hill by which Metellus had descended and to prevent any retreat by that route. Then he signaled the Numidian cavalry to attack. Their method of fighting was one of fast and furious harassment, throwing missiles at long range then wheeling away and returning again. The Romans were powerless and unable to hit back. When they charged the enemy retreated individually in different directions so that any pursuit was also an individual affair which broke the Roman ranks. The result was an utterly confused and random conflict, which proceeded in this way until late in the day. By this time the Numidian attack was weakening and Metellus managed to reform his ranks. As his men knew that they had no way to escape, they obeyed his order to storm the hill, and they dislodged the enemy who turned to flight.”

“In the meantime Jugurtha’s Numidian ally, Bomilcar, led some cavalry and the elephants down to the plain and followed Rutilius to his wooded camp site by the river. When the two sides closed they both charged. Fortunately for the Romans the elephants became entangled in the trees and presented easy targets for individual destruction. As soon as the Numidians saw that they had lost the beasts on which they relied for protection, they turned and fled. Forty of the elephants were killed and four were captured.”

from Sallust’s work “Jugurthine War”. Sallust was a mid-1sr Century BC Roman Senator and a political supporter of Julius Caesar. 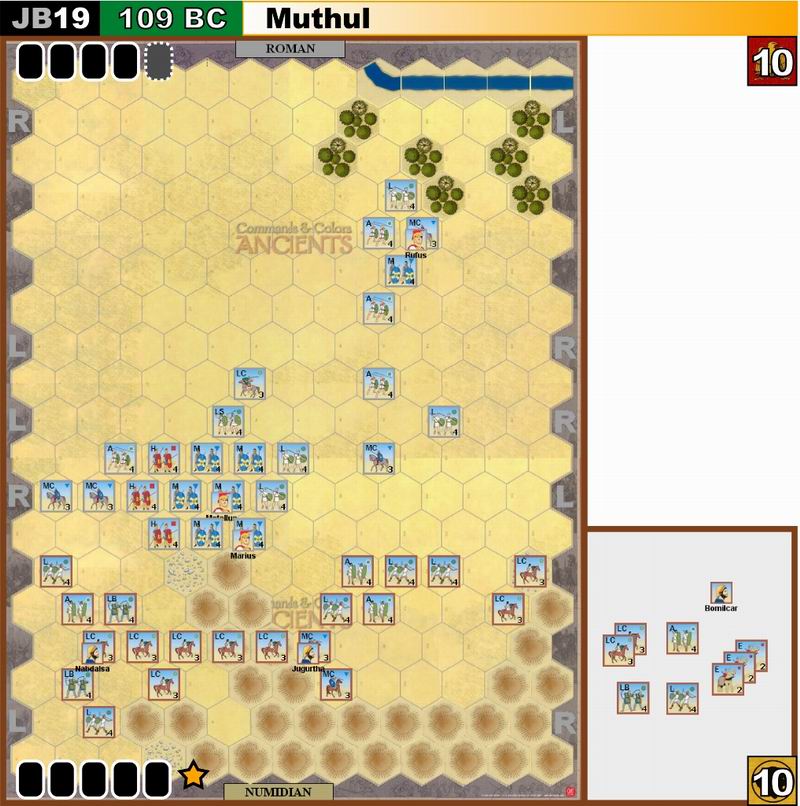 at the end of Roman Turn 5)

Special Rules
Command Rules: A Leader attached (stacked with) a friendly unit may cancel one sword hit on the unit in lieu of canceling a retreat hit.
Marius or Jugurtha may cancel both a sword and a retreat hit if stacked with a friendly unit.
A unit involved in close combat with the support of a Leader may only count one helmet hit amongst those rolled to inflict a hit on an opposing unit. Units supported by Marius or Jugurtha may count up to two helmets however.
Roman Command Cards: The Roman Player starts the game with four command cards—he draws an extra command card at the end of his 5th Player-turn in the scenario bringing his hand to five cards for the remainder of the scenario.
Line Commands in the Scenario: No more than five units can be moved by play of a single Line Command Card in the scenario for both sides Roman and Numidian.
Numidian Leader Movement: Numidian Leaders moving by themselves may move up to four hexes instead of the usual three hexes.

Retreat & Evasion Scenario Special Rules:
In this scenario units & leaders may retreat or evade in any direction ---there are no set map-edges in the scenario for the players to retreat or evade towards. Please follow the special rules outlined below for retreat and evasion by both players.

Cavalry Retreat: ALL Cavalry in the game need only retreat, and are allowed to retreat two hexes per un-canceled or taken Flag result—not the normal distances listed in the rules.

Retreats in the Muthul River Scenario: Units retreating due to Flag results must end their full retreats in a hex not adjacent to enemy units-exception: elephants may end their retreat adjacent to the enemy if they have no other option. The Roman Player, however, determines the path of Numidian elephant retreat. Failure to make a full retreat draws the usual penalties outlined in the rules. A retreating unit must end its retreat the full number of hexes taken in the retreat from its pre-retreat hex location. All Auxillia units in the scenario must retreat 2 hexes per Flag result taken

Roman Legionary Retreat: A Roman Medium or Heavy infantry unit which suffers one or more Flag hits may retreat up to 2 hexes (in lieu of the normal one hex) to satisfy the first Flag hit being taken—this is only done at the option of the Roman player and in accordance with the other retreat rules outlined in this section.

Building the Roman Camp by the Muthul River:
Historical Note: Metellus had sent the Roman leader Rutilius Rufus ahead with a small advance force to create a camp for that night on the river, an action that was rather typical for the Romans when engaged in a long march. A light advance force would often not only locate, defend, and prepare a camp site for the main army, but also would engage in skirmishes with the enemy and scout out the new operating locality.

The Roman Player may build a camp hextile in any clear hex located adjacent to a river hex utilizing two foot units and any Roman Leader.  One foot unit must be located in the intended camp site, the other foot unit and the Roman Leader must be located in any adjacent hex(es) to the intended camp site. Once the units/leader are in place to actually build the camp the Roman Player must play any Leadership Card (regardless of type or section) in lieu of using the card to order units on the map. At that point place the camp hextile on the map. If the camp hextile is removed after placement by enemy action it may not be rebuilt.

Entry of Off-map Numidian units into the Scenario:
In order to bring on all his off-map units and the Bomilcar Leader the Numidian Player may bring them on by playing any Leadership Card (regardless of type or section) in lieu of using the card to order units on the map. The off-map units/leaders arrive in any vacant hexes in the Numidian mapboard right section in mapedge hexes numbered 1 (A1, B1, C1 etc .through to I1) and/or mapedge hexes E13, D12, C13, A13, and X12 on the Roman mapboard/Junction hexrow. The arriving units/Leader enter those clear hexes as their first hex movement hex and may move to a second hex and battle if possible on their turn of entry. The Numidian Player may not enter the off-map units/leader until his 5th Player-turn or later.

Special Terrain Rules:
Hills:  Roman units only entering hill hexes via ordered moves must halt their move and cannot attack out of such hexes on the same player-turn.
All other terrain rules are generally handled normally, but see the special features of the Roman Camp above.