Historical Background
Reduced to even deeper despair by this defeat, Jugurtha took refuge with the fugitives and a part of the cavalry in the desert, and then made his way to Thala, a large and wealthy town in which the greater part of his treasure was kept, and his children were being brought up in grand style. As soon as Metellus learned of this, although he knew that between Thala and the nearest river lay fifty miles of dry and desolate country, yet in hope of ending the war by getting possession of so important a town he undertook to surmount all the difficulties and even to defeat Nature herself. Accordingly, he gave orders that every pack animal should be relieved of all burdens except ten days' allowance of grain, and that in addition to this only skins and other vessels for carrying water should be taken. Moreover, he scoured the fields to find as many domestic animals as possible and upon them he loaded utensils of every kind, but especially wooden ones, which he obtained from the huts of the Numidians. Besides this, he ordered all the people who dwelt near by (they had surrendered to Metellus after the flight of the king), to bring each as much water as he could, naming the day and the place where they were to appear. He himself loaded his animals from the river which, as I have already said, was the nearest water to the town, and with this supply began his march for Thala. When Metellus had reached the place which he had appointed with the Numidians and had pitched and fortified his camp, suddenly such an abundance of rain is said to have fallen from heaven that this alone furnished the army with water enough and to spare. The amount also which was brought to him was greater than he anticipated, since the Numidians, as is common just after a surrender, had more than done their duty. But religious motives led the soldiers to prefer the rain water and its fall added greatly to their spirits; for they thought that they enjoyed the favour of the immortal gods. The next day, contrary to Jugurtha's expectation, the Romans arrived at Thala. The townspeople had supposed themselves protected by their inaccessible situation; but although they were amazed at this great and unexpected feat, they none the less made diligent preparations for battle. Our men did the same.
But the king now believed that there was nothing which Metellus could not accomplish, since his energy had triumphed over all obstacles: arms, weapons, places, seasons, even Nature herself, to whom all others bowed. He therefore fled from the town by night with his children and the greater part of his treasure. And after that he never lingered in any place for more than one day or one night, pretending that his haste was due to important affairs; but as a matter of fact he feared treachery and thought that he could escape it by rapid movements, since such designs require leisure and opportunity. But when Metellus saw that the inhabitants were eager for battle and also that the town was fortified both by its position and by defensive works, he encompassed the walls with a stockade and a moat. Then in the two most suitable places that he could find he brought up the mantlets, built a mound, and upon it placed turrets to protect the besiegers and their work. The townsmen for their part hastened their preparations; indeed, nothing was left undone by either side. At last, after much exacting toil and many battles, the Romans, forty days after their arrival, got possession of the town only, all the booty having been destroyed by the deserters. For when these men saw the wall battered by the rams and realized that all was lost, they carried the gold, silver, and other valuables to the palace. There, gorged with food and wine, they burned the treasure, the palace and themselves, thus voluntarily paying the penalty which they feared they would suffer at the hands of a victorious enemy.
The stage is set. The battle lines are drawn and you are in command. The rest is history. 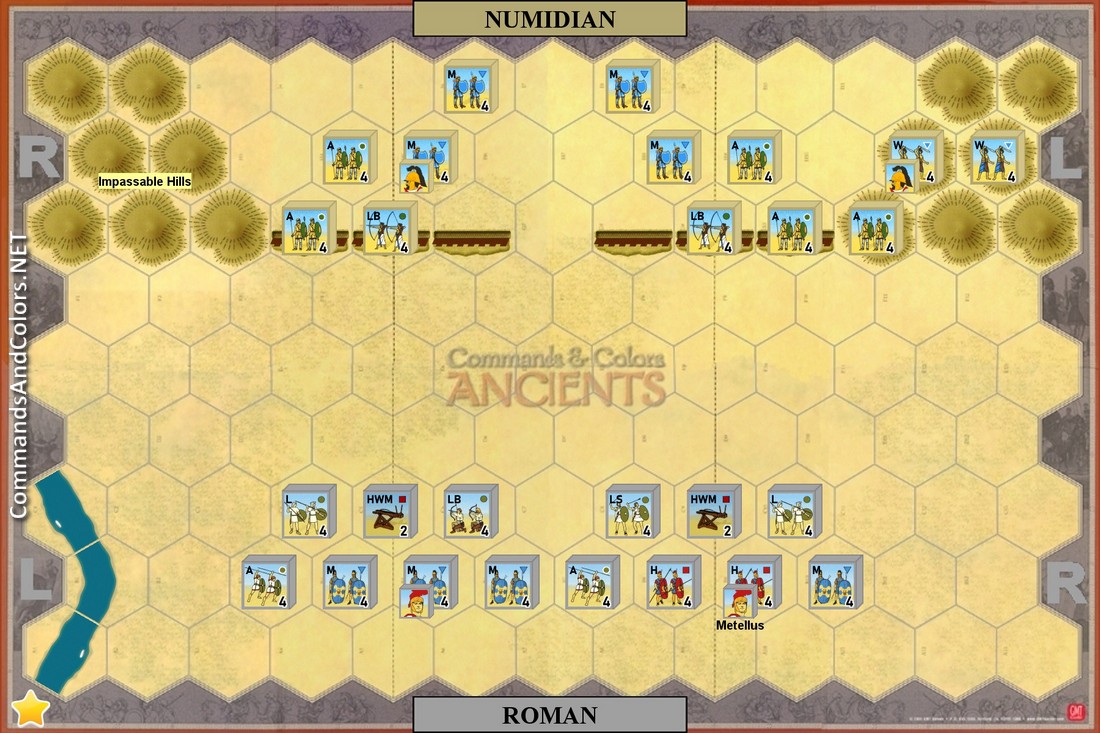