Historical Background
After his defeat in the 2nd Macedonian War, King Philip put his efforts into rebuilding the manpower and material resources of his country. Rome started to cast a wary eye towards Macedon, especially when Philip died and was replaced, not by his Romanophile son Demetrius who had been murdered previously, but by the anti-Roman Perseus, who continued his father's military buildup. Rome took minor Macedonian meddling in Greek affairs as the pretext for a renewed war.
The Romans appointed Publius Licinius Crassus with 2 overstrength legions along with Greek and Pergamene allies, that gave him about 32,000 troops. Perseus had approximately 44,000 men. The two armies camped near each other in Thessaly where Perseus had been campaigning to bring Thessalian cities back into his domain. In an early cavalry skirmish the Romans were bested and thereafter kept to their fortified camp. Perseus decided to try and provoke an engagement by marching his army close to the Roman camp. The Romans responded, and both sides lined up near Callicinus hill. The battle was strange in that due to some possible terrain difficulties, Perseus kept his 21,000 strong phalanx well to the rear and never committed them to the battle. Crassus did likewise with his heavy legionaries and these remained in camp with Crassus throughout the battle. Both sides therefore formed up with only their cavalry and lighter troops. Perseus commanded the Macedonian centre with his elite guard (Agema). He was flanked by foriegn auxiliaries and mercenaries, with cavalry on the flanks. Cotys commanded the left wing, and Meno was in overall command of the cavalry. The Romans deployed their Greek cavalry and light troops on the left under Laevinus and supported these with their elite Thessalian cavalry. The Italian cavalry and velites occupied the right under Gaius Crassus, the brother of the Consul. The centre was manned by Greek hoplites and Pergamene troops under Attalus, the son of Eumenes, the King of Pergamum.
Perseus attacked first. The Thracian and Gallic troops on his left quickly drove off the Roman right, while Perseus led the central assault which was also successful. Only the Thessalian cavalry stopped the Roman defeat becoming a disaster by constantly attacking to allow the disorganised Roman army to retreat back to their camp. Crassus had 2,200 men killed and 600 taken prisoner compared to only 60 Macedonian casualties. If Perseus hoped that his victory would gain him a favourable peace settlement he was sadly wrong. The Romans fought on, with Perseus being first out manoevered and then outfought at the battle of Pynda in 168 BC.
The stage is set. The battle lines are drawn and you are in command. Can you change history? 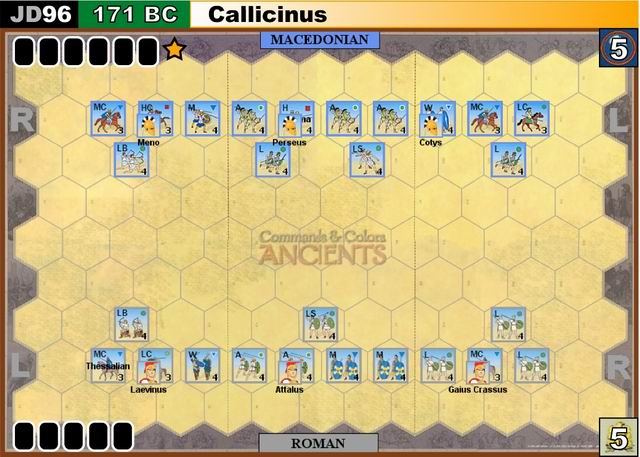 Special Rules
The Macedonian heavy infantry unit (Agema) may move 2 hexes if it does not battle.

The Roman medium cavalry unit in hex B2 (Thessalians) may ignore 1 crossed sword and 1 retreat banner.

Tactical flexibility is not in use as the Roman medium infantry units are Achaean and Aetolian hoplites.