Historical Background
The Roman victory at Cynoscephalae (197) had humbled, but not eliminated, the Macedonian army. As the reality of Roman world domination became clear, most of Greece rallied to support Perseus, the son of Philip V. The Third Macedonian War broke out in 169, but the initial Roman campaigns were plagued by inept commanders and ili disciplined troops. Then Lucius Aemilius Paullus was elected consul and immediately instituted a tough regimen of drill and discipline. The Roman army had two reinforced legions, Numidian allies with 22 elephants under their Prince Misagenes and a few Greek allies - 34,000 foot and 4,000 horse in ali. Perseus fielded a large force of 26,000 Macedonians supported by 13,000 Greek and Thracian allied infantry and 4,000 cavalry.
Perseus offered battle on a flat plain near Pydna but Paullus declined to fight and encamped behind rough ground. The following day fighting broke out between the two armies' watering parties. Perseus responded by suddenly advancing his entire army on the Roman camp. Paullus launched an attack on his right with his elephants, breaking the Macedonian left flank. In the center the Macedonian phalanx drove back the Roman legions, but lost its cohesion as it advanced into broken ground. The Romans counterattacked when the Macedonian phalanx began to fragment. After hard fighting, the legionnaires were able to penetrate and destroy the phalanx. It was a decisive victory for the Romans, and the final major battle in establishing Roman dominion of the Mediterranean world. Pydna is also considered the classic Legion versus Phalanx battle, demonstrating the superiority of the Roman system.
The stage is set. The battle lines are drawn and you are in command. Can you change history? 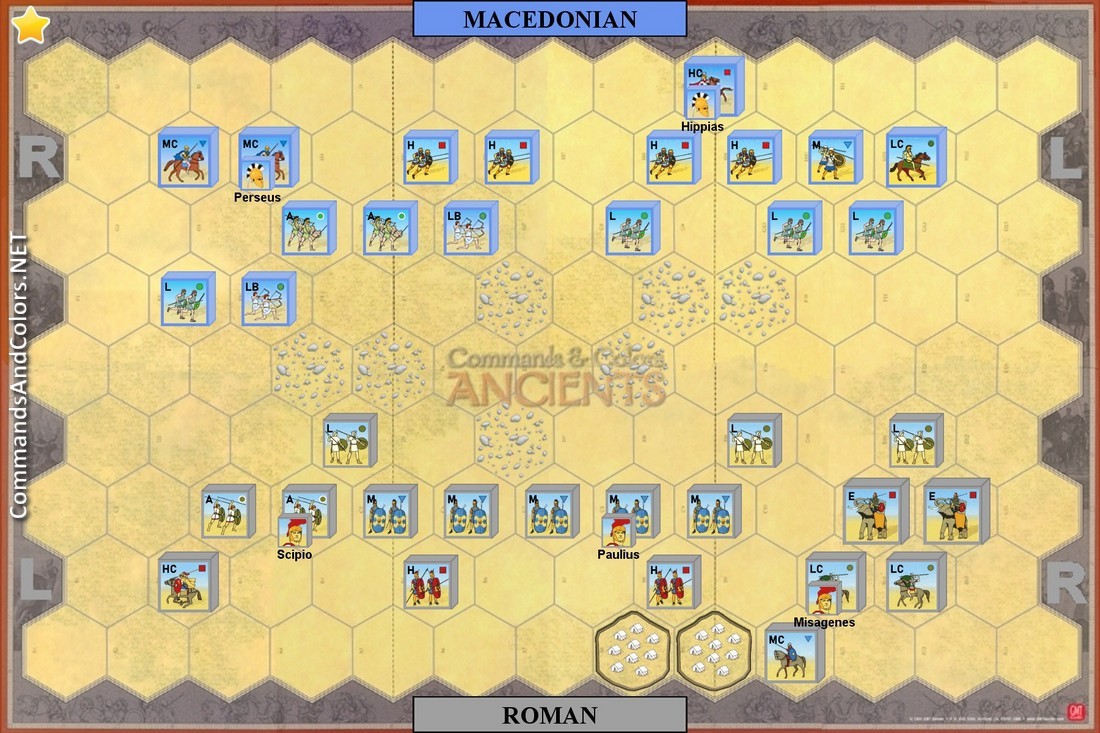 alecrespi replied the topic: #543 11 years 9 months ago
Vassal Log available for download HERE .
This time you will see a Macedonian Victory...
Final Result was 8-4.
Read More...