Historical Background
In 181BC the Lusones tribe and other Celtiberians of Hither Spain revolted against Roman rule and massed an army of 35,000. The Praetor Quintus Fulvius Flaccus augmented his own army with as many local troops as possible but was still badly outnumbered. He marched into Carpetania and camped near the town of Aebura, in which he installed a small garrison. The Celtiberians approached Aebura and camped two miles away at the base of a hill. Flaccus sent Lucius Acilius on a night march with 6,000 native troops and some cavalry around to the back of the hill with instructions to attack the enemy's camp when signalled.
The following day Flaccus enticed the Celtiberians from their camp with a show of force led by Gaius Scribonius, whose men retired quickly back towards the Roman camp. With the Celtiberians nearing his camp, Flaccus led out his army and deployed the remaining native troops on his left, the 5th and 7th legions in the centre and the Latin allies on his right. As the battle commenced Flaccus signalled for the surprise attack. Acilius and his men quickly overan the Celtiberian camp and then attacked into their rear. The Celtiberians, knowing they had no retreat route, fought fiercely and almost overran the Roman left, where the Aeburan garrison arrived to help shore matters up. The Celtiberians were eventually broken and massacred, with 23,000 killed and 4,700 taken prisoner. The Romans suffered almost 3,500 killed, mostly from the left wing native troops.
The stage is set. The battle lines are drawn and you are in command. Can you change history? 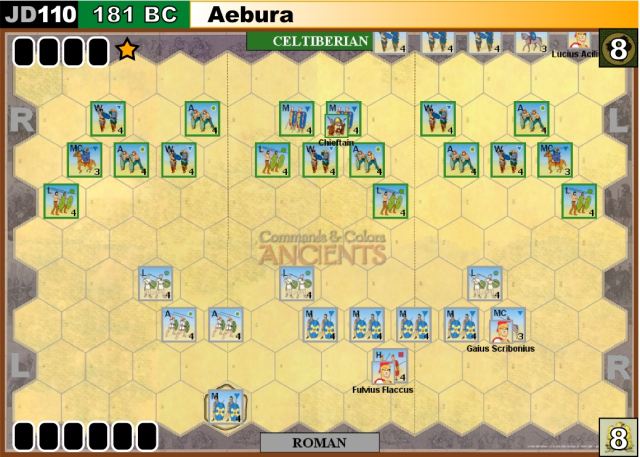 At the start of any one Roman turn that player may place the following units in any four linked I row hexes: 3 warrior infantry, 1 medium cavalry and the leader Lucius Acilius. Prior to this event no Celtiberian unit may enter an I row hex.