The Battle of Manlian Pass 180BC

Historical Background
The following selection is from Book 40 of Livy’s History of Rome: [40.39]As his successor was somewhat late in reaching Spain, Fulvius Flaccus led out his army from winter quarters and began to devastate the more distant parts of Celtiberia, where the inhabitants had not come in to surrender. By this action he irritated the natives more than he intimidated them, and secretly collecting a force they beset the Manlian Pass, through which they were tolerably certain that the Romans would march. Gracchus had instructed his colleague, L. Postumius Albinus, who was on his way to Further Spain, to inform Q. Fulvius that he was to bring his army to Tarraco, where he intended to disband the old soldiers, incorporate the reinforcements into the various corps and reorganise the whole army. Fulvius was also informed of the date of his successor's arrival which was close at hand. This information compelled Flaccus to abandon his projected operations and withdraw his army hastily from Celtiberia. The barbarians, ignorant of the true reason, and imagining that he had become aware of their rising and secret gathering in arms and was afraid of them, invested the pass all the more closely. When the Roman column entered the pass, the enemy rushed down upon it from both sides. As soon as Flaccus saw this, he allayed the first symptoms of tumult in the column by giving the order through the centurions for every man to stand where he was and get his weapons ready. The packs of the baggage animals were piled up in one place, and partly by his own exertions, partly through his officers, he got the whole force into such fighting order as the time and place required. He reminded his men that they had to deal with those who had twice made their submission and who were impelled by treachery, not by true courage. His soldiers, he told them, would have returned home without distinguishing themselves; the enemy had given them the chance of a glorious and memorable homecoming. They would carry in triumph through Rome swords reddened with the slaughter of their foes and spoils dripping with their blood. Time did not allow him to say more; the enemy were upon them and fighting was already begun at the outermost points. Then the two lines closed. [40.40]The battle was everywhere a desperate one, but with changing fortunes. The legionaries fought splendidly, nor did the two divisions of allied troops offer a less vigorous resistance. The native auxiliaries confronted by men similarly armed, but somewhat better fighters, could not hold their ground. When the Celtiberi found that their regular order of battle made them no match for the legions, they bore down upon them in wedge-formation, a maneuver which gives them such weight that in whatever direction they carry their attack it cannot be withstood. Even the legions were now thrown into disorder and the Roman line was all but broken. Fulvius, seeing this, galloped up to the legionary cavalry and shouted: "Unless you can come to the rescue it will be all over with this army." "Say," they shouted in reply, "what you want done, we shall not be slack in carrying out your orders." He replied: "Close up your squadrons, cavalry of the two legions, and let your horses go where the enemy wedge is pressing our men. Your charge will have all the greater force if you make it on unbitted horses." (We have heard that Roman cavalry have often done that and covered themselves with glory.) They removed the horses' bits and charged the wedge in both directions, first forward and then back again, inflicting great slaughter upon the enemy and shivering all their spears. When the wedge on which all their hopes rested was broken up, the Celtiberi so completely lost heart that they gave up almost any attempt at fighting and began to look about for means of escape. When the auxiliary cavalry saw the notable feat of the Roman horse they, too, fired by the courage of the others, and without waiting for orders, spurred their horses against the enemy who was now thoroughly shaken. This proved decisive; the Celtiberi fled precipitately in all directions, and the Roman commander, watching them as they turned their backs, vowed a temple to Fortuna Equestris and the celebration of solemn Games to Jupiter Optimus Maximus. The Celtiberi, scattered in flight, were cut to pieces all through the pass. It is asserted that 17,000 of the enemy were killed on that day, and more than 4000 taken alive, together with 277 military standards and nearly 600 horses. The victorious army remained encamped in the pass. The victory was not without loss; 472 Roman soldiers, 1019 soldiers of the allies and 3000 native auxiliaries perished on the field. With its former glory thus renewed the victorious army marched to Tarraco. Tiberius Sempronius, who had landed two days before, went to meet Fulvius and congratulated him upon his successful conduct of affairs. They were quite at one as to which soldiers they should release and which retain. After releasing the time-expired men from their military oath, Fulvius embarked with them for Italy. Sempronius led the legions into Celtiberia. 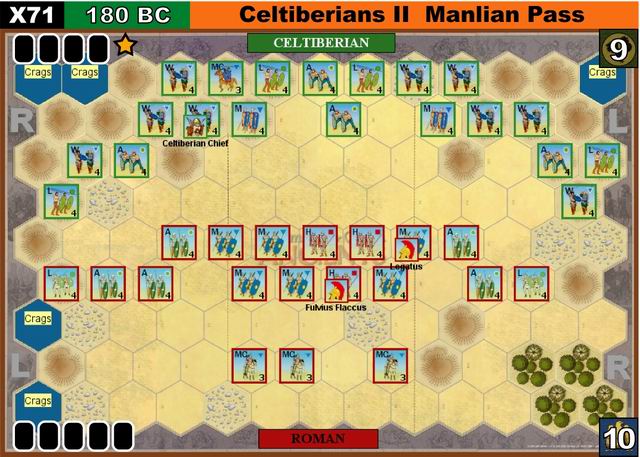 Scenario Special Rules:
Command: All Leaders may cancel a retreat or a sword hit if present with the unit.
Units on both sides involved in close combat with the support of a Leader may only count one helmet hit amongst those rolled to inflict a hit on an opposing unit—Except if Fulvius Flaccus is the supporting Leader then up to two helmet hits can be counted.
Units and the Rally Card: No unit can be rallied to beyond its strength at the start of the scenario. If a Player rolls “swords” when attempting to rally he may freely chose which unit gets a block back.