The Battle of Aebura 181BC

Historical Background
The following selection is from Book 40 of Livy’s History of Rome: [40.30]A serious war broke out this summer in Hither Spain. The Celtiberi had got together as many as 35,000 men; hardly ever before had they raised so large a force. Q. Fulvius Flaccus was in charge of the province. On hearing that the Celtiberi were arming their fighting men, he had drawn from the friendly tribes all the troops he could, but he was very inferior to the enemy in numbers. In the first days of spring he led his army into Carpetania and fixed his camp near the town of Aebura, a small detachment being sent to occupy the town. A few days afterwards the Celtiberi encamped at the foot of a hill about two miles distant. When the Roman praetor became aware of their proximity, he sent his brother Marcus with two squadrons of native cavalry to reconnoitre the enemy's camp. His instructions were to approach as closely as possible to the rampart so as to get some idea of the size of the camp, but if he saw the enemy's cavalry coming, he was to retire without fighting. These instructions he carried out. For some days nothing took place beyond the appearance of these two squadrons, and they were always withdrawn after the enemy's cavalry had emerged from their camp. At last the Celtiberi issued from their camp with the whole of their infantry and cavalry, and formed up in line of battle midway between the two camps and remained stationary. The ground was level and well adapted for a battle. There the Spaniards stood in expectancy, whilst the Roman general kept his men within their rampart. For four successive days the enemy took their stand in battle-order on the same spot, but the Romans made no move. After this the Celtiberi rested in their camp as they had no opportunity of fighting; the cavalry alone rode out and took station as advanced pickets, in case of any movement on the part of their enemy. Both sides went out to collect fodder and wood in the rear of their camps, neither of them interfering with the other. [40.31]When the Roman praetor had satisfied himself that after so many days' inaction the enemy would not expect him to take the initiative, he ordered L. Acilius to take the division of allied troops and 6000 native auxiliaries, and make a circuit round the mountain which lay behind the enemy's camp. When he heard the battle-shout he was to charge down on their camp. They started in the night to escape observation. At daybreak Flaccus sent C. Scribonius, the commander of the allied troops, with his "select" cavalry up to the enemy's rampart. When the Celtiberi saw them approaching more closely and in greater strength than they had usually done, the whole of their cavalry streamed out from the camp and the signal was given for the infantry also to advance. Scribonius, acting on his instructions, no sooner heard the clatter of the advancing cavalry than he turned his horses' heads and made for his camp. The enemy followed in hot haste. First their cavalry came up and soon after the infantry, never doubting but that they would that day capture the Roman camp. They were not now more than half a mile from the rampart. As soon as Flaccus considered that they were sufficiently drawn off from guarding their own camp he sallied forth from his camp, his army which had previously been drawn up inside the rampart being formed into three separate corps. The battle-shout was raised not only to stimulate the ardour of the combatants but also to reach the ears of those who were amongst the hills. Without a moment's delay these charged down, as they had been ordered, on the enemy's camp, where not more than 5000 men were left on guard. The strength of the assailants compared with their own scanty numbers and the suddenness of the attack so appalled them that the camp was taken with little or no resistance. When it was captured Acilius set fire to that part of it which could be best seen from the field of battle. [40.32]The Celtiberi who were in the rear were the first to catch sight of the flames; then word ran through the whole line that the camp was lost and was burning furiously. This increased the dismay of the enemy and the courage of the Romans. On the one hand there were the cheers of their victorious comrades, on the other the sight of the hostile camp in flames. The Celtiberi were for a few moments uncertain what to do, but as there was no shelter for them if they were defeated, and their only hope lay in keeping up the struggle, they recommenced the fight with greater determination. Their centre was being closely pressed by the fifth legion, but they advanced with more confidence against the Roman left where they saw that their own countrymen were posted, and it would have been repulsed had not the seventh legion come up in support. The troops left to hold Aebura appeared in the middle of the battle and Acilius was in the enemy's rear. Between the two the Celtiberi were being cut to pieces; the survivors fled in all directions. The cavalry were sent after them in two divisions and caused great slaughter among them. As many as 23,000 men were killed that day, and 4700 were made prisoners; 500 horses and 88 military standards were captured. It was a great victory, but not a bloodless one. Out of the two legions rather more than 200 Roman soldiers fell, 830 out of the Latin allies, and 2400 out of the native auxiliaries. The praetor led his victorious army back to camp. Acilius was ordered to remain in the camp he had captured. The following day the spoils were collected, and those who had shown conspicuous bravery were rewarded in the presence of the whole army. 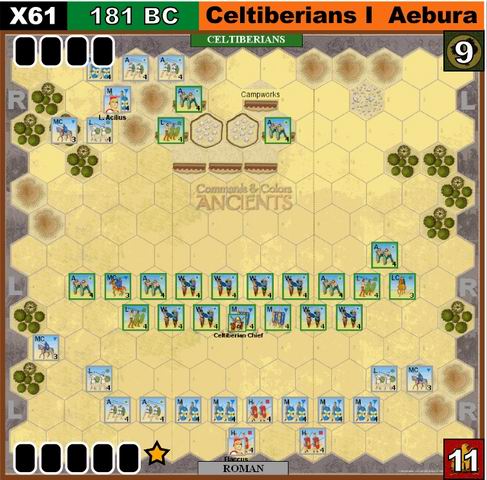 Special Rules:
Command: All Leaders may cancel a retreat or a sword hit if present with the unit.
Units on both sides involved in close combat with the support of a Leader may only count one helmet hit amongst those rolled to inflict a hit on an opposing unit—except if the Roman Leader Fulvius Flaccus is supporting then up two helmet hits count.
Units and the Rally Card: No unit can be rallied to beyond its strength at the start of the scenario. If a Player rolls “swords” when attempting to rally he may freely chose which unit gets a block back.

Outflanking---This is an easy way of introducing facing and flanks to the game with little fuss—it can be retrofitted to other scenarios where appropriate:
A unit is said to be “Outflanked” if it is surrounded in all six adjacent hexes by either enemy units, or hexes adjacent to an enemy unit. The presence of friendly units or impassable terrain does not negate an “Outflanked” situation in any way. Units on the board edges (and not surrounded by six adjacent hexes) cannot be “Outflanked”.
Effects of being Outflanked: “Outflanked” units when battling back roll only half the normal number of dice they would be normally entitled to rounded up—to a maximum of only two dice—“Outflanked” units when battling back never hit on helmet rolls even if supported by a leader. A unit’s “Outflanked” situation is judged at the instant it battles back.
Barbarian Indiscipline: No more than six Celtiberian units in a single linked “blob” of hexes may be ordered by the Celtiberian Player via play of a single line Command Card.
Barbarian Exhaustion: Celtiberian Warrior units reduced to one or two blocks may not engage in Momentum Combat unless stacked with a Leader.

Roman Cavalry Discipline: Roman Medium Cavalry only retreat 2 hexes per Flag result taken.
Iberian Skirmish Style Combat: Auxillia on both sides may evade the close-combat attacks of enemy medium or heavy foot. Auxillia for both sides battle-back normally with only two dice.
Legionary Non-combat Moves: Roman Heavy & Medium Infantry units ordered to move with any card except “Double Time” or “Line Command” may move two hexes as long as they do not start or end or pass through hexes adjacent to enemy units. (note: this rule was added to increase Roman mobility on this extended map)

Terrain Special Rules:
Celtiberian Campworks: Celtiberian foot Units occupying their own Campworks hextiles that are not in an outflanked condition Battle-back with one extra dice and may ignore the first Flag result inflicted upon them.
Campworks tiles are removed (and the hex reverts to clear terrain) when an opposing Roman unit enters the hex for any reason. Campworks block line of sight. Roman units may only enter Campworks tiles if they are ordered from a starting position in an adjacent hex to move in (and they must then halt the move in the adjacent Campworks hex and remove the tile), or as a result of a Momentum Move after combat into the Campworks hex. The Momentum Move also halts in the Campworks hex.
Camp Core Hextiles: Celtiberian Camp Core Hextiles confer no combat benefit to Celtiberian units occupying them, but do block line of sight. Camp Core tiles are removed (and the hex reverts to clear terrain) when a Roman unit of any type enters the camp hex for any reason.