Clash of Giants
Battle of Magnesia 190 BC

Historical Background:
“The morning was wet and foggy. King Antiochus’ line was longer than the Romans and could not be seen from end to end…The moisture unstrung the archers bows and made unserviceable the slings and javelin thongs. The Roman soldiers, mostly heavily armed did not suffer this inconvenience. The scythed chariots were opposite Eumenes, a general who had learned how to deal with this arm. Before the battle opened, he sent out the archers, darters, and slingers to skirmish in their front, and by shouts and wounds to frighten the chariot horses and dromedaries. This they readily accomplished, and not only drove the chariots away from their post, but these wheeling, some to the rear, others to the right and left, so unsteadied the auxiliaries of the enemies left wing, that they mostly took to flight before even coming into action. The Roman Cavalry was then sharply pushed forward, and owing to the confusion made by the flying chariots, dromedaries, elephants and auxiliaries, it made short work of the mailed horse that protected the flank of the phalanx. With scarcely any loss to the Romans, Antoichus’ whole left wing had been dispersed.
“The legions now advanced on the front and swung round on the flank of the phalanx, while the horse rode round to its rear. The elephants gave them no trouble, for they had long ago learned how to avoid the danger of these monsters by wounding them in the sides and cutting their hamstrings. The flight of the left wing had already unstrung the phalanx, which needed to have its flanks protected, and the sudden onset of the Romans had allowed them to use their sarissas to but poor advantage…The battle seemed already lost, when the Romans were themselves unsettled by bad fortune on the left..”
“Antiochus who commanded the right of his army, had observed the Roman left, which was close to the river but not leaning on it, had no reserve and little cavalry. About the time Eumenes had succeeded in disorganizing the enemy’s left , the king, leading a choice body of auxiliaries and mailed horseman, drove in the four turmae of Roman horse, and attacking the legion in the flank, forced back a considerable section of it towards the camp. The military tribune M. Aemilius, who commanded the camp, was fortunately equal to the occasion. Issuing from the gates his entire force of extraordinarii, two thousand strong, by dint of entreaties and threats, and by cutting down some of the runaways in flight, he brought them to a standstill, faced them about, and sustaining them with his own fresh forces checked the king’s further advance. A force of two hundred horse galloped over from the victorious right to aid the rallying left, and took Antiochus in flank, and part of the legion wheeled on the king’s left. He was forced back and the line was reestablished.”
“Meanwhile the phalanx, taken fully in the flank and rear by the Roman right, and pressed stoutly in front as well, began to waver. No sooner had Antiochus been driven back from his promised victory on the Roman left, than his centre failed him. The Romans were winners on all points and the king’s army was cut to pieces. …The Romans had won a noble victory. The legion had shown itself markedly superior to Antoichus’ phalanx.”
(Taken from T.A. Dodge’s 1891 Classic: “Hannibal” ) 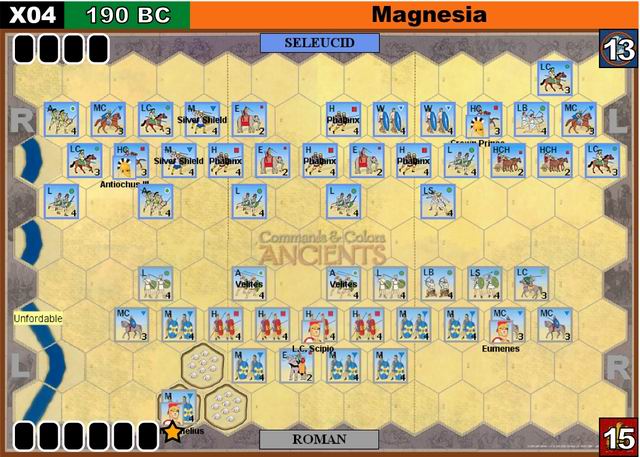 goes to 5 cards if any Roman Camp hex falls to the Seleucid Army.

—The Roman Player moves twice at the start of the game before the Seleucid Player takes his first move. The Players than take alternate turns as normal for the remainder of the game.

2) The Roman Elephant unit only throws 2 dice maximum if in close combat with enemy elephants or battling back against elephants. (the Romans probably employed North African forest elephants from a now extinct species—these were smaller and less fierce by all accounts than the Indian elephants used by the Seleucid Empire)

3) Roman Auxillia Units (also called “Velites”) may attempt to evade if attacked by a Seleucid Phalanx unit. In this case they evade exactly like any other green light infantry unit.

6) The three fortified Roman Camp hexes only benefit the Roman player—if these hexes are entered by Seleucid units the first Seleucid unit to enter the hex loses one block (as men split off to loot) immediately, and the fortified camp tile is removed from the map—thereby converting the hex to clear. Each camp tile so removed scores the Macedonian Player one banner towards victory. Also the first time a Roman Camp hex falls to the Seleucid Player, he receives one extra Command Card immediately and now has a five Command Card limit for his hand.

7) Seleucid Warrior units are not really Western-style Gallic, German, or Celt-Iberian tribesfolk, rather they represent the much less effective Asiatic tribal levies of the Seleucid king. Therefore ignore the normal Warrior rules in the two following areas:
1) These units always throw three dice in close combat or battle back.
2) The Seleucid Warrior units do not ignore the first retreat result inflicted upon them even if they are at full strength.

8) Due to the dampness of the early morning start of the battle, missile units may not
move and also fire in the same turn regardless of which card is used to move them.
This restriction is lifted after a player has played a card and taken his turn three times.

9) Seleucid Chariot units may not claim support from adjacent units if retreat hits are inflicted upon them by enemy missile fire.
If a Seleucid Chariot unit is forced to retreat, and there are friendly units in one or both of the rear hexes immediately in back of the unit that a possible retreat route could pass through, each such friendly unit (up to two units if both rear hexes are occupied) immediately loses one block—this loss occurs regardless of whether or not the chariot retreat is successfully completed and such losses occur regardless of any losses inflicted on the chariot due to an inability to retreat.
Seleucid Chariot units may never attempt to evade close combat.

10)The Seleucid Medium Infantry are the “Silver Shields” and are therefore considered to be the foot guards of the Seleucid king. These units if ordered via a line command card may move up to 2 hexes (as a special exception to the jargon on the card), and engage in close combat.

11) An Elephant unit attacking a Phalanx in close combat from non-front hexes always uses 4 dice—the Phalanx only uses 2 dice when battling back in such a situation.