Historical Background
Antiochus III was invited to liberate Greece by the Aetolians, but on arrival he received only the assistance of 4000 Aetolean auxillaries. The Romans dispatched a force of 20,000 infantry, 2000 Cavalry and 15 Elephants. Antiochus retired to, and fortified the Thermopylae position which he manned with 10,000 infantry, 500 cavalry, 6 Elephants, and some war machines. He sent the Aetolians off to garrison the various passes that could outflank his position as Xerxes had done to Leonidas.
The Romans at first struggled to break the Seleucid position, but the arrival in the Seleucid rear of Marcus Cato with 4,000, men who had fought through the Aetolian positions, panicked the Seleucids and they fled south, Antiochus losing much of his army in the process.
The stage is set. The battle lines are drawn and you are in command. The rest is history. 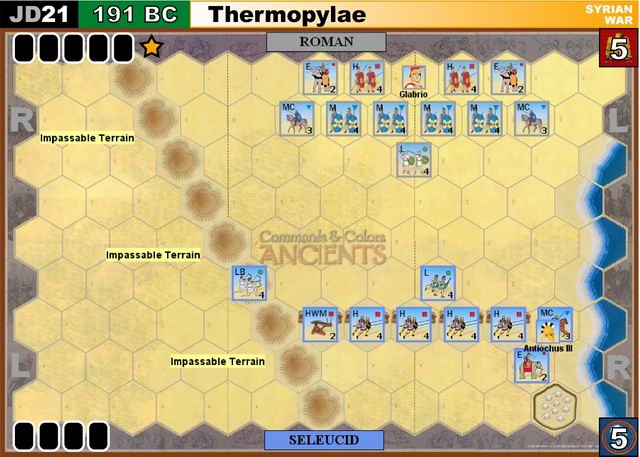 Special Rules
If a Roman unit ends its turn on the camp tile the Roman player receives a victory banner (once only).

All hexes to the left of the line of hills e,g, A6, are out of play (impassable) hills.

At the start of each Roman turn that player should roll one combat dice. If a leader is rolled the Roman player must place the following 4 units in any hex from A7 to A12. If 3 hexes are not available they enter the following turn. 2 Medium Infantry, 1 Light Infantry and 1 Leader (Cato).