Historical Background
Changes from the offcial version
For this scenario I heeded Appian for deployment, and both Livy and Appian for subsequent events. Hence the Galatian warriors are on the Seleucid left, not right. I beefed up the Seleucid phalanx a bit, and the Romans lose their tactical advantage special rule. This is because neither Appian nor Livy suggest the Seleucid phalanx, pike armed in the Macedonian style, was defeated by the Roman legions. Rather they were given much respect by the Romans who were reluctant to close with them, They were abandoned by their own flank troops, surrounded by cavalry from the victorious Roman right wing, and then disrupted by their own elephants rampaging in the face of fire from light troops. They were only then put to the sword. Given those circumstances, it seems unreasonable to make Roman heavy and medium infantry any more effective against them directly. I have placed the Roman elephants on the right of the centre rather than the left. On the left it is too easy for them to interfere with Antiochus cavalry. There is no evidence in Livy or Appian for this happening in the actual battle. The smaller Roman African elephants are also made appropriately much less effective when used directly against their larger Seleucid Indian counterparts. Both Appian and Livy make much of them being much smaller and afraid of their larger Indian relatives. I have fewer light foot troops in total than the official version. This makes victory more dependant on events on the wings, as in the real battle according to accounts. I have changed the line of the river slightly to further constrict the Seleucid army. Appian describes the Seleucid phalanx as being deployed in a narrow space between the flanks. Finally, it appears that Antiochus heavy cataphract cavalry disappeared in pursuit of the Roman left wing for a while. By the time they came back the battle was over. Hence the optional impetuous special rule. As in almost all ancient battles, different reconstructions are possible. Both Livy and Appian have the battle start on the Seleucid left with a failed attack by the scythed chariots which disrupted the Seleucid cavalry on that wing. Perhaps at the same time, there was a charge on the right by the Seleucid cavalry wing commanded by the king himself. That charge broke their opposing infantry leading to a pursuit by the Seleucid horse, leaving the field to unsuccessfully attack the Roman camp. The Roman ally Eumenes, commanding all their cavalry on the right of the Roman-Allied army then counterattacked the Seleucid left, already disrupted by the rampage of their own scythed chariots, and broke it. In the centre of the battle line, the Seleucids had arrayed their pike phalanx with elephants in the intervals. The Roman attack ultimately managed to disorder and destroy the phalanx. There was further fighting at the Seleucid camp before that fell.
The stage is set. The battle lines are drawn and you are in command. The rest is history. 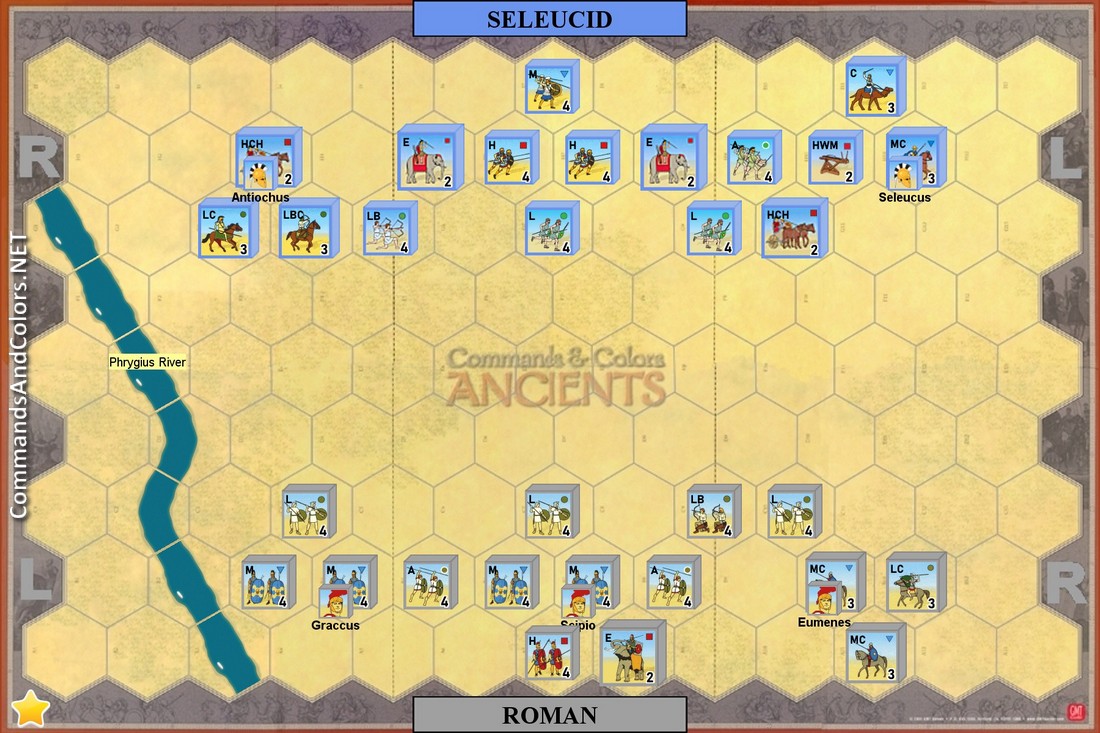 Special Rules
The Phrygius river is impassable along its entire length.

African Elephants
In battle directly against the Seleucid elephant units the Roman elephant unit may not re-roll sword hits, may not ignore sword hits against it, and it must retreat an additional hex for each flag rolled against it.

Impetuous Heavy Cavalry (optional)
If the Seleucid heavy cavalry unit destroys the last block of a Roman unit it may take ground and perform it’s bonus combat as normal, but then rolls 2 dice. Any red symbol means the cavalry are removed from the board for the rest of the game, lost in pursuit. They do not count as a banner for the Romans. Any leaders attached to them at the time are similarly lost. Only roll like this once per turn, even if another unit is destroyed on the bonus combat.