Written by alecrespi. Posted in Second Macedonian War (200-196 BC)

Historical Background
King Philip V of Macedonia had allied with Carthage against Rome during the 2nd Punic war and he was granted the beneficial peace of Phoenice in 205 BC to get him out of the war. After the war, Rome was eager for revenge, and to clip the wings of Macedon. Rome was therefore open to complaints about Philip from the Greeks and Attalus of Pergamum. Rome used the non co-operation of Philip in these matters as a pretext for war, which broke out in 200 BC.
Rome initially appointed Sulpicius Galba, and then Villius Tappulus, but neither men were able to shift the Macedonians from their entrenched positions in the Mountains of Epirus and NW Macedonia. For the Campaigning season of 198 BC Rome appointed the young and energetic Quinctius Flamininus, who kept Villius on as an advisor. Flamininus however had the same problems as his predecessors as the Macedonians were almost impossible to shift out of the narrow mountain passes. If he took another route into Macedon his supply lines to the coast could easily be interdicted, leaving him stranded in a region with little in the way of foragable resources. Flamininus approached the Macedonians under Philip at a narrow gorge where mountains on either side of the deep and fast flowing river Aous dropped precipitously down to the water. Philip posted his light troops, auxiliaries and war machines on the flanking heights while concentrating his phalanx to block the narrow pass up the gorge. 40 days of stalemate and negotiation ensued until Flamininus finally got his lucky break. A local shepherd revealed to him a concealed path leading to a position above and behind the Macedonians. Flamininus dispatched 4,300 men, commaned by a Tribune, on nightime marches along the secret path while he skirmished with the Macedonians to distract their attention. On the 3rd day when Flamininus expected the arrival of his flanking force he committed his army to a full scale assault. He led a thrust up the centre of the valley with supporting attacks on his flanks. The Romans, many of them veterans of the 2nd Punic War, struggled to make hedway whilst all the while being showered by arrows, javelins and boulders from the heights around them. Suddenley a smoke signal from above herelded the timely arrival of his ambush, and seeing themselves in danger of encirclement, the Macedonians turned and fled leaving 2,000 dead and their baggage behind.
(Terrain and dispositions based on the article "The Opening Campaigns and the Battle of Aoi Stena in the Second Macedonian War" by N. G. L. Hammond from The Journal of Roman Studies, Vol 56, Parts 1 and 2 (1966).)
The stage is set. The battle lines are drawn and you are in command. Can you change history? 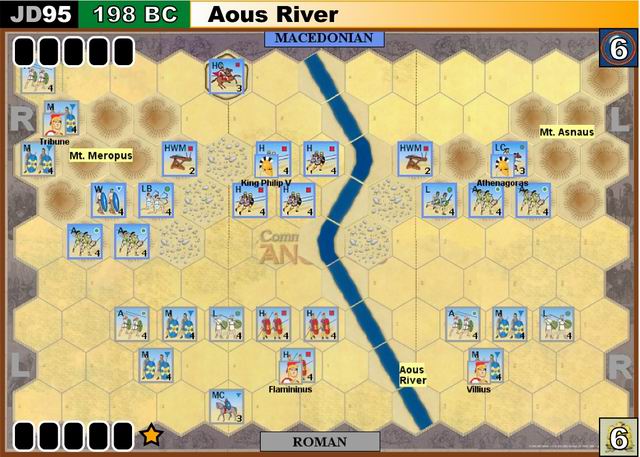 Broken ground represents steep slopes and crags and is impassable. It does not block line of sight.

The Roman player gains a victory banner while one of his/her units occupies the camp hex.

The 3 Roman units adjacent and attached to the Tribune may not be ordered or attacked until they are activated. At the very start of every Roman turn, that player rolls a combat dice. If the result is a leader the 3 units and leader are now activated and the Roman player receives a victory banner. This simulates that Flamininus was not not sure exactly when the outflanking Romans would arrive and the Macedonian shock when they did.