Cynoscephalae 197 BC
Phalanx Vs. Legion I

Historical Background
Following the final defeat of Hannibal of Carthage at Zama in 202 BC the Romans became involved in a new conflict with Philip V of Macedon over his attempts to dominate Greece. The Roman Senate after being petitioned by the Aetolian League and other Greek states dispatched Consul Flamininus with an army of 2 Legions to bring Philip to task. Flamininus rapidly moved his Legions and the allied Greek forces into Thessaly in an effort to cut Philip’s army off from a supply of corn. For several days of marching the two armies moved in tandem separated only by a stony ridge of hills. The battle itself was brought on by a skirmish between two patrols that met each other on the ridge. Both armies rushed from their camps and attempted to form up. The Romans managed to finish a very rough shakeout of battle order somewhat more quickly than the Macedonians did. Despite this early advantage Philip took control of the Macedonian right wing and center and succeeded in pressing the Roman left back a distance. The battle, however, turned on a quick decision reached by the Roman right wing. Spearheaded by elephants (probably borrowed either from the defeated Carthaginians or Rome’s Numidian ally Masinissa) the Roman right wing in short order saw to the collapse of the ill-formed Macedonian left wing. A Roman tribune than, on his own initiative, turned the victorious rear maniples of the right wing about to launch a new attack into the flank and rear of Philip’s advancing phalanx thereby bringing the battle to a close in a crushing Macedonian defeat. It is believed that well over half the Macedonian Army, supposedly 13,000 men, were killed or captured as a result of this Roman victory. With his army virtually destroyed in the field Philip immediately sought peace terms from Rome, was forced to pay a hefty tribute, and had to fore-swear any major role in the affairs of the other Greek city-states and leagues by with-drawing Macedonian garrisons from Greece-proper and suffering the reining in of his regional political ambitions. 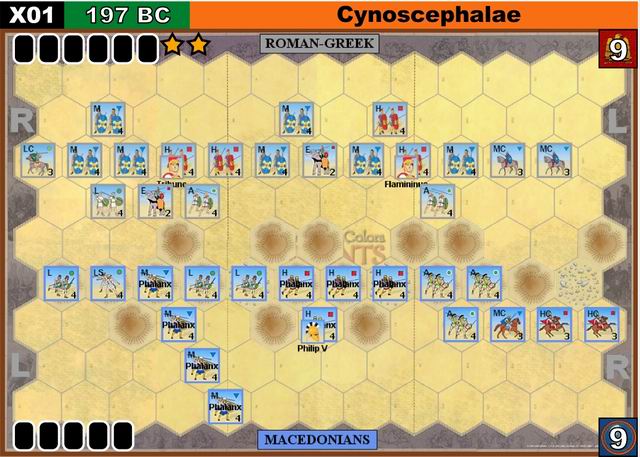 The Roman/Greek Player moves twice at the start of the game before the Macedonian Player takes his first move. The Players than take alternate turns as normal for the remainder of the game.

Victory:
9 Banners (use the existing 8 each—if a player has scored 8 banners and eliminates an additional enemy unit he wins). The First Roman Elephant unit eliminated by the Macedonian Player scores no Banner however.

1) All Macedonian Medium and Heavy Infantry are considered to be Phalanx Infantry. Phalanx Infantry operates under a set of special rules as follows in a) through e) below.
a) Clear Terrain Combat Bonus: When involved in Close Combat with an enemy Infantry unit, a Phalanx Infantry that still has three or four blocks on map receives an extra (+1) dice if both of the involved opposing units are in clear hex with no terrain tile present. This is both for any initial Close Combat Attack, and also when Battling Back (but see exception in d) below). The bonus does not apply to any Momentum Combat.
b) Phalanx Infantry cannot utilize “double time” Movement or Order activation per the Double Time card. Phalanx Infantry may not be ordered at all by play of a Double Time Card.
c) Phalanx Infantry may not engage in Close Combat if they have just moved before combat their maximum of one hex, unless the move was into one of the two hexes toward their “front” (i.e.: “front” as in towards the initial setup position of the opposing army) of the moving Phalanx Infantry unit, and that moving Phalanx unit than proceeds to engage in close combat with an enemy unit in one of its “front” two hexes in the new hex it moved to. Phalanx Infantry may engage in normal Momentum Movement and Momentum Combat regardless of the direction of the combat—although without the Phalanx Clear terrain Combat bonus if involved in Momentum Combat (see a) above). Note: Non-moving Ordered Phalanx units may always engage in Close Combat.
d) Phalanx infantry units that “Battle Back” at enemy units located in hexes other than the “front hexes” roll a maximum of three dice (and even this could be reduced further by terrain factors).
e) Phalanx Infantry units located in clear terrain that also still have three or four blocks on map at the start of the close-combat or battle back ignore the first sword hit inflicted on them by an enemy unit attacking or battling back from a “front” hex. This advantage is also granted in any Momentum Combat.
Example of “Front” hexes: A Phalanx Infantry unit in hex C7 would have the following two hexes adjacent: D7 & D6 as its “front” hexes.

2) The Line Movement Card may only be utilized to move a maximum of 5 linked infantry units and their attached leader(s) (neither side in this unplanned and almost accidental battle were exactly arrayed in their normal legionary or phalanx battle-lines, due to the way the clash began via a chance meeting between patrols). Line Movement also provides a limited ability to rally infantry units. (See 3) below.)

3) Once in a player’s turn wherein he utilized the Line Movement Card has completed, but before the new card is drawn, the player rolls three dice in an attempt to rally eligible infantry units located within two linked hexes of any friendly leader. The infantry units in question eligible for this type of rally attempt may not have just moved or engaged in any type of combat during that turn using the Line Movement Card.
Rally results:
Red, Green, Blue—an eligible infantry unit whose color matches that of the one rolled gains one lost block back. The rolling player picks which one if more than one of that type is eligible.
Helmet: The Player attempting the rally may nominate one eligible unit to get one lost block back.
Sword: The Player attempting the rally may nominate two eligible medium infantry or heavy infantry units only, each gets one lost block back.
Retreat: The Player attempting the rally may nominate one eligible unit able to retreat to get one lost block back. The unit conducts a normal retreat and receives a block. The nominated unit in question may retreat out of the 2 hex-linked radius from a friendly leader.
Elephant and Cavalry units may not rally using this method. No infantry unit may gain back more than one block in a turn via this procedure.

4) When elephants engage in close combat, momentum combat, or battle-back terrain is never considered as a factor for either the elephant unit or its opponent in determining the number of dice used by either.
Treat all hill and broken hexes as clear hexes for this type of combat for dice considerations ONLY.

5) Elephant units do not have to halt their move after they enter a broken hex having only moved one hex.

7) A Leader attached (stacked with) a friendly unit may cancel one sword hit on the unit in lieu of canceling a retreat hit.

8) A unit involved in close combat with the support of a Leader may only count one helmet hit amongst those rolled to inflict a hit on an opposing unit.