Historical Background
Victory in the Second Punic War (218-201 BC) established Rome as the dominant power in the Western Mediterranean. Since Philip V of Macedon had allied with Hannibal during that war, Rome had a score to settle. Rome used complaints from Rhodes and Pergamum about Macedonian aggression as a pretext to invade. The Senate sent Flamininus with two legions and some Greek allies for a showdown with Philip in 197 BC. This would be the first contest between the Roman legion and a true Macedonian phalanx (Pyrrhus’ phalanx had been composed of Epirotes, and Hannibal’s of many nationalities). The two armies were nearly identical in size, with around 23,000 infantry and 2,000 cavalry each. The battle would be won by the superior tactical system, not weight of numbers. Still, the hilly Greek terrain at Cynoscephalae did favor the legion. The two armies were marching on opposite sides of a ridgeline and met unexpectedly in the early morning mist. A skirmish began between light troops, and Philip decided to commit his entire army. Philip took command of the right wing and successfully attacked the Roman left. Flaminius seized the initiative and launched an attack spearheaded by elephants on the left flank phalanx, breaking it before it was fully deployed. Each army’s right wing was now victorious. An unknown Roman tribune, ‘seeing what ought to be done’ detached some maniples from the Roman right to strike the flank of the victorious Macedonian right wing phalanx. Philip’s pha- Cynoscephalae – 197 BC lanx was shattered in a textbook example of flexibility versus rigidity. Philip's hopes to unite the Greeks under Macedonian hegemony ended with his defeat.
The stage is set. The battle lines are drawn and you are in command. The rest is history. 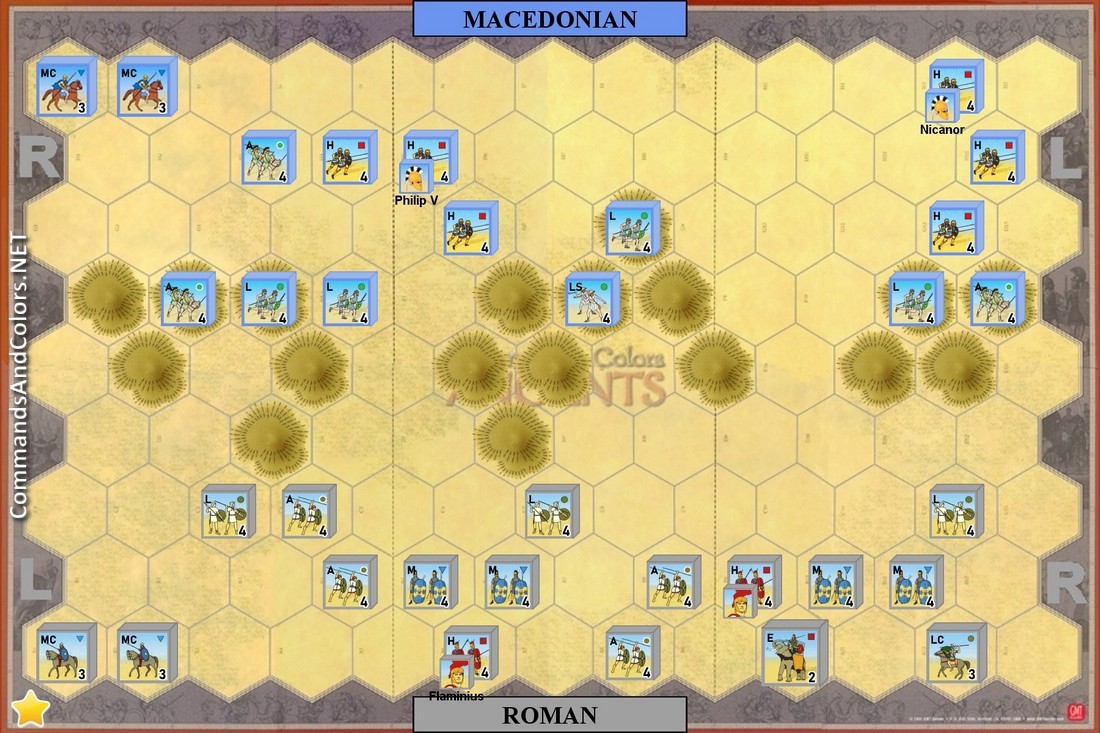 Special Rules
Optional – Roman Tactical Flexibility. An unsupported Greek heavy infantry unit may only battle back against a Roman medium or heavy infantry unit with 3 battle dice (which reflects the ability of the more maneuverable legions to gain the flanks of the phalanx and strike decisively).

HANJEL replied the topic: #4351 6 months 3 weeks ago
A game very close to the historical battle. And very balanced.
clavain replied the topic: #4073 1 year 1 month ago
6-0 Macedon. The Romans, played by yours truly, weren't patient enough to wait for good cards, and moved their light foot into the hills and their medium cav up while making one line with medium and heavy foot. The Macedonian largely hung back and took out the isolated light foot in the hills with his own, and decimated a Roman mounted charge (which almost killed Philip but destroyed both MC, one after a three flag nine hex retreat of which only six were possible). Things then went from bad to worse as the Romans could not get going, and a failed Elephant and LC attack resulted in the eventual death of the LC for the sixth banner. Never got the main line up, let alone engaged.

MasterChief replied the topic: #1001 12 years 2 months ago
I generally think that Expansion one has lots of good scenarios. I know I've played this, but cannot recall how it went. Will have to play it again, before I get my Napoleon pieces

While the Macedonians pressed forward in all sections, the Romans drove hard into the center careful to avoid the heavy infantry. The Macedonians had trouble getting the left flank into the fight and the elephant played no role in the battle for the Romans.

The Roman LC unit streaked through the center and almost destroyed a Macedonian infantry unit that had retreated to the baseline. Only luck saved the bold Numidians from destruction.

The Romans won by focused attention in favorable hill battle in the center and left before the Roman left fell back. The Macedonian left was too late to avoid a 6-3 defeat.
Read More...