Historical Background
Following the crushing Roman victory over the combined army of Gauls at Cremona in 200BC, the Romans proceeded to successfully subdue the remaining independant Gallic tribes. The Boii were the last major tribe still active against the Romans, and so in 193BC the consul Lucius Cornelius Murela took his army into Boii territory and laid waste to their lands and carried away much booty. When Murela departed south a Boii force followed him and during one night they stole past the Roman camp and set up an ambush in a narrow defile along the Roman route of advance. The Romans discovered the Boii and would not march into the trap so that the Gauls had to descend into the plain to give battle. The Romans fortified their spoils under the guard of the Triari and then deployed.
The initial Gallic attack was pressing back the left wing of the Romans, led by the ex-consul Tiberius Sempronius in charge of a "Special" corps, until a combination of a Roman attack by their fresh legions, and a cavalry charge led by Livius Salinator, broke the Gauls who were now visibly wilting in the heat of the day. 14,000 Gauls were slain and 1,092 captured for the loss of 5,000 Romans and allies.
Not long after this defeat the Boii finally submited to the Romans and Cisalpine Gaul was fully conquered by Rome.
The stage is set. The battle lines are drawn and you are in command. Can you change history? 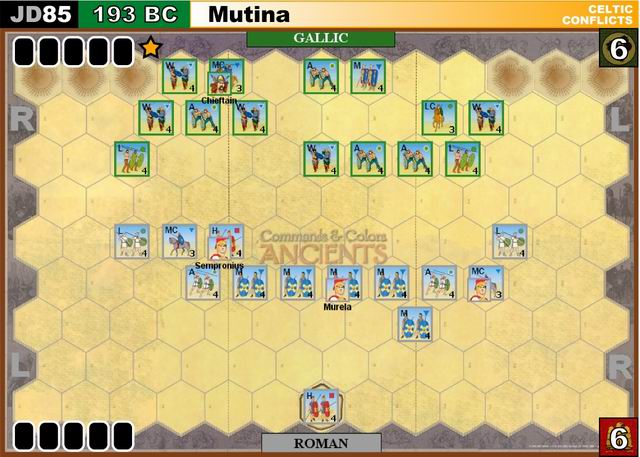 Special Rules
The heat of the sun caused the Gauls to become badly fatigued. This was probably due to them having had no rest during the night as a result of their march past the Roman camp. To simulate this, the Gallic player doesn't draw a command card on their 3rd and 6th turns.

If a Gallic unit ends its turn on the camp tile, that player is awarded a victory banner.

g1ul10 replied the topic: #1903 3 years 11 months ago
Played twice this evening for two Boii victories: 6-4 the first, 6-3 the second. The warriors are really dangerous. The scenario plays really fast. For this, the Gallic player doesn't suffer enormously for the progressive reduction of his hand. One can simply assume the Gauls start with four cards and ignore the special rule.

Mark-McG replied the topic: #1472 5 years 1 month ago
"To simulate this, the Gallic player doesn't draw a command card on their 3rd and 6th turns."

Does this mean Gallic command drops from 5 to 4 and then 3?
Read More...