Historical Background
The Gauls remained quiet after their crushing victory in the Litana Forest in 215BC. They briefly rose in support for the invasions of northern Italy by Hannibal's brothers Hasdrubal and Mago, and suffered in their defeats at the Metaurus and Po River battles. Before retreating to Africa, Mago left behind an officer called Hamilcar with a mission to unite the Gallic tribes and stir up trouble for the Romans. Hamilcar succeeded, but not until after Carthage had been defeated. Hamilcar united the Insubres, Boii and Cenomani tribes along with many Ligurians and formed an army of about 40,000 men. This army sacked the city of Placentia in a surprise attack and then besieged the city of Cremona. The Romans responded by reinforceing 5,000 local allied troops under the Praetor Furius Purpureo with 2 legions from the south giving a total strenght of about 19,000 troops. Hamilcar left about 10,000 troops to blockade Cremona and rushed the remainder against the advancing Romans.
Hamilcar made strong flank attacks that the Romans were able to contain. The Romans then struck at the now weakened Gallic centre. The Gauls collapsed and were slaughtered in their thousands along with Hamilcar. This was the last great organised gathering of the Cisalpine Gauls. Individual tribes fought on, but by 191BC the two century Roman/Gallic struggle was over. The Romans colonised the Po Valley and Romanised the Gallic survivors.
The stage is set. The battle lines are drawn and you are in command. Can you change history? 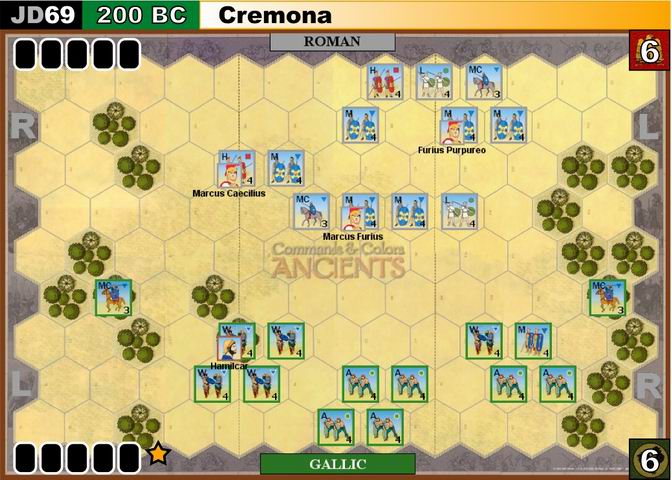