Echoes of Hannibal: Cremona 200BC 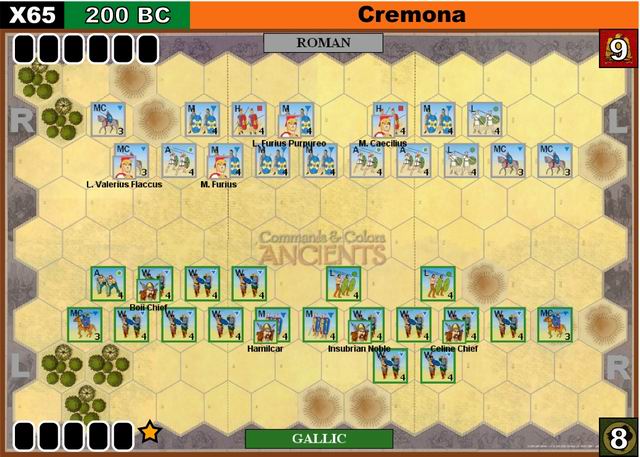 Victory
Victory for The Romans is 9 Banners for the Gauls 8 Banners—all scored normally, except the Roman receives 2 Banners if he eliminates Hamilcar and 1 Banner if Hamilcar is forced to evade off-map.

Special Rules:
Command: All Leaders may cancel a retreat or a sword hit if present with the unit.
Units on both sides involved in close combat with the support of a Leader may only count one helmet hit amongst those rolled to inflict a hit on an opposing unit.
Only the overall Leaders for each side: Hamilcar and Furius Purpureo can support a unit in an adjacent hex involved close-combat or battle-back—the other Leaders in the scenario can only assist a friendly unit in combat if stacked with that unit.
Units and the Rally Card: No unit can be rallied to beyond its strength at the start of the scenario. If a Player rolls “swords” when attempting to rally he may freely chose which unit gets a block back.
Outflanking---This is an easy way of introducing facing and flanks to the game with little fuss—it can be retrofitted to other scenarios where appropriate:
A unit is said to be “Outflanked” if it is surrounded in all six adjacent hexes by either enemy units, or hexes adjacent to an enemy unit. The presence of friendly units or impassable terrain does not negate an “Outflanked” situation in any way. Units on the board edges (and not surrounded by six adjacent hexes) cannot be “Outflanked”.
Effects of being Outflanked: “Outflanked” units when battling back roll only half the normal number of dice they would be normally entitled to rounded up—to a maximum of only two dice—“Outflanked” units when battling back never hit on helmet rolls even if supported by a leader. A unit’s “Outflanked” situation is judged at the instant it battles back.
Barbarian Exhaustion: Gallic Warrior units with one or two blocks remaining may not engage in momentum combat after advancing unless the unit has a friendly leader in the same hex with it.
Barbarian Indiscipline: No more than six Gallic units in a single linked “blob” of hexes may be ordered by the Gallic Player via play of a single line Command Card.
Roman Cavalry Discipline: Roman Medium Cavalry only retreat 2 hexes per Flag result taken.