“When Boii Attack”: The Battle of the Roman Camp 194 BC

Scenario Note: An interesting & more or less drawn and very bloody battle fought on all sides of a Roman Camp in Gallia Cisaplina (Northern Italy).

Historical Background
(The selection below is from Livy’s History of Rome Book 34) 34.46: L. Valerius, who was still in command in Gaul, fought a hotly contested action with the Insubrians and the Boii (who)… had crossed the Po in order to rouse the Insubrians to arms.. On arriving in his province Tiberius Sempronius marched his troops first of all into the country of the Boii. Boiorix was their chief at the time, and after he and his two brothers had induced the whole nation to resume hostilities he fixed his camp in an exposed position in the open country to show that they were prepared to fight if they were invaded. When the consul became aware of the numbers and confidence of the enemy he sent to his colleague asking him, if he thought he could do so, to hasten to his assistance, and he would by one means or another delay an action till he came. The same reason which led the consul to delay made the Gauls seek an early decision, for their confidence was increased by their enemy's hesitation and they determined to engage him before the two consuls united their forces. For two days, however, they merely stood ready for battle in case there was any advance from the Roman camp; on the third day they went up to the rampart and attacked the camp simultaneously on all sides. The consul ordered his men instantly to seize their weapons, and for a few minutes kept them standing under arms, partly to encourage the unthinking confidence of the enemy and also to allow of his distributing the troops at the different gates from which each body was to make the sortie. The two legions were ordered to advance through the principal gates, but the Gauls blocked the exits in such dense masses that they could not emerge. The struggle went on for a long time in the confined space; it was not so much fighting with their right hands and swords as pushing with their shields and bodies, the Romans trying to force a way for their standards, the Gauls endeavouring to get into the camp, or at all events to keep the Romans from getting out. Neither the one side nor the other could make any advance until Q. Victorius, a centurion of the first rank, and C. Atilius, a military tribune, the former belonging to the second legion, the latter to the fourth, did what had often been tried in desperate struggles, and snatching the standards from the bearers flung them amongst the enemy. In their effort to recover the standards the men of the second legion were the first to force their way out of the camp. 34.47 They were now fighting outside the rampart while the fourth legion were still held up in their gate. Suddenly a new alarm arose on the opposite side of the camp. The Gauls had broken through the quaestorian gate, and after meeting with the most obstinate resistance had killed the quaestor, L. Postumius Tympanus, M. Atinius and P. Sempronius, praefects of allies, and nearly 200 men. This side of the camp was in the enemy's hands until one of the "special cohorts" which had been sent by the consul to defend the quaestorian gate drove them out of the camp after killing many of them, and stopped those who were breaking in. Almost at the same moment the fourth legion, with two of the special cohorts, forced their way out of another gate. So there were three separate actions going on simultaneously on different sides of the camp, and the confused shouts which arose called off the attention of the combatants from their own struggle to the doubtful position of their comrades. Up to noonday the battle was fought with equal strength on both sides, and almost equal hopes of victory. But the heat and the exertion told upon the Gauls with their soft and perspiring bodies, utterly incapable as they were of enduring thirst, and compelled them to beat a retreat. The few who still stood their ground were charged by the Romans and driven in rout to their camp. Then the consul gave the signal to retire; most of the men obeyed it, but some in their eagerness for battle and in the hope of securing the hostile camp pushed on to the rampart. The Gauls, deriding this weak force, rushed in a body out of their camp. Now it was the Romans who were routed, and those who refused to return to camp at the consul's order were driven thither by their fears. So first on one side and then on the other victory and flight alternated. The Gauls, however, lost as many as 11,000 men, the Romans 5000. 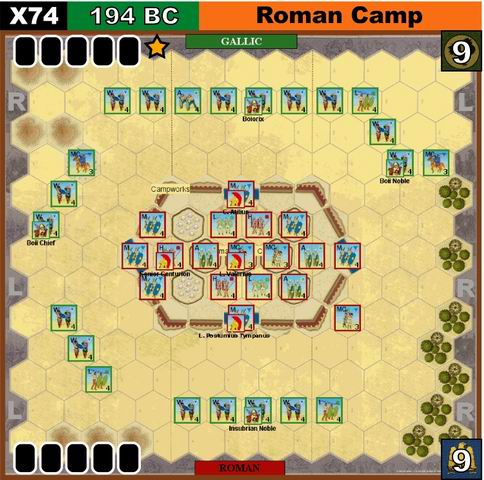 Victory
Victory is 9 Banners initially for both sides scored in the normal way, however the Gauls also receive 1 Banner for each Roman Camp Core hextile they manage to remove. The battle is considered & declared a draw that instant if all Gallic units/leaders have been eliminated or have exited/evaded from the map and the Roman Player has not yet achieved victory, or if the elimination of all the remaining Gallic units/leaders on the map will not reach the required 9 Banner level for Roman victory

Special Rules:
Command: All Leaders may cancel a retreat or a sword hit if present with the unit.
Units on both sides involved in close combat with the support of a Leader may only count one helmet hit amongst those rolled to inflict a hit on an opposing unit.
Only the overall Leaders for each side: Boiorix and L. Valerius can support a unit in an adjacent hex involved close-combat or battle-back—the other Leaders in the scenario can only assist a friendly unit in combat if stacked with that unit.
Units and the Rally Card: No unit can be rallied to beyond its strength at the start of the scenario. If a Player rolls “swords” when attempting to rally he may freely chose which unit gets a block back.

Gallic Exhaustion: Gallic Warrior units with one or two blocks remaining may not engage in momentum combat after advancing unless the unit has a friendly leader in the same hex with it.

Barbarian Indiscipline: No more than six Gallic units in a single linked “blob” of hexes may be ordered by the Gallic Player via play of a single line Command Card.
***Retreat & Evasion Special Scenario Rules:
A) In this scenario Units & Leaders on both sides may retreat or evade in any direction as long as they end up the required (or taken) retreat/evasion distance from the hex they initially were in before the retreat or evasion. Units from both sides may not and can never retreat or evade into hexes adjacent to enemy units unless the hex in question contains a friendly campworks or camp core hextile. Leaders may always evade through hexes adjacent to enemy units. Gallic Units/Leaders, however may not evade/retreat into Roman camp core or campworks hexes regardless of whether those tiles are adjacent to enemy units.
B) Roman Medium Cavalry units only retreat 2 hexes per Flag result taken.
***Terrain Special Rules:
Roman Campworks: Roman foot Units occupying their own Campworks hextiles that are not in an outflanked condition Battle-back with one extra dice and may ignore the first Flag result inflicted upon them. Roman foot units may never conduct an ordered move, or a momentum move from a campworks hex into a hex outside the initial Roman camp trace of the Roman campworks & gates. (in other words Hexes outside the Map 1 initial camp trace counter-clockwise listed “doughnut” of: A9, A8, A7, A6, A5, B4, C4, D4,E5, E6, E7, E8, E9, D9, C10, B9)…Roman units may close-combat/missile attack from their campworks tiles to a hex outside the initial Roman camp trace. If the campworks hextile is removed by Gallic action and converted to a clear terrain hex (see paragraph below) the initial camp trace is no longer considered for the now clear hex in relation to Roman foot ordered moves or momentum moves.
Roman Campworks tiles are removed (and the hex reverts to clear terrain) when an opposing Gallic unit enters the hex for any reason. Campworks block line of sight. Gallic Foot units may only enter Campworks tiles if they are ordered from a starting position in an adjacent hex to move in (and they must then halt the move in the adjacent Campworks hex and remove the tile), or as a result of a Momentum Move after combat into the Campworks hex. Cavalry units on both sides may not close-combat attack, retreat, evade, or conduct an ordered move or momentum move into Campworks hexes regardless of who owns them. They may battle-back into such hexes however.
Camp Core Hextiles: Roman Camp Core Hextiles confer no combat benefit to Roman units occupying them, but do block line of sight. Camp Core tiles are removed (and the hex reverts to clear terrain) when a Gallic of any type unit enters the hex for any reason.
Roman Camp Gates Hextiles: Combat and Battle-back into or out of Roman Camp Gate Hextiles is always at minus one normal dice. Roman foot units occupying a Roman Gate hex may ignore the first Flag result inflicted upon them. Roman Camp Gates hextiles are removed if entered by a Gallic unit for any reason and the hex reverts to clear terrain.

Declaring Gallic Tactical Retreat and Gallic Map Exit:
Gallic Tactical Retreat: Once per game after Roman Player-turn 4 the Gallic Player may declare a Tactical Retreat at the start of his Player-turn in lieu of playing his Command Card and taking a normal turn. Every Gallic unit & leader must immediately be retreated by the Gallic Player, in any order, (using the scenario retreat rules listed above) from one to three hexes, the actual length of the retreat (one, two, or three hexes) is determined at the option of the Gallic Player. Units unable to retreat at all per the rules listed above immediately lose one block and stay in place.

Gallic Map Exit: Gallic units/leaders adjacent to ANY map-edge may exit the map if ordered by ANY command card except a Line Command during a normal Gallic Player-turn after Gallic Tactical Retreat had been declared. Exited Gallic units/leaders never return to the game but do not count as lost for victory. No Gallic units/leader can
voluntarily leave the map via an ordered move before Gallic Tactical Retreat had been declared, however Gallic (and Roman Leaders) could voluntarily evade off map (or be forced off) if their evasion started on any map edge hex at any time.