Historical Background
The Roman strategy of avoiding direct combat with Hannibal while campaigning against his allies has been successful, and by 204BC Hannibal has been reduced to a small enclave around the Bruttium port of Crotona in the toe of Italy. The Consul Sempronius Tuditanus advanced with his army against Crotona, but he was defeated in a series of skirmishes with Hannibal and lost 1,200 troops. Tuditanus was now reinforced by the consular army of Licinius Crassus and the Romans advanced once again. Although now outnumbered by the combined Roman armies, Hannibal could not afford to lose his last sea connection to Carthage and so he accepted battle. Livy's account of the battle has it as a Roman victory, but as Crotona was neither captured or put under siege, and the Roman armies withdrew from the region, it would appear that it was in fact a minor victory to Hannibal. His last as it would turn out. The success of Scipio in Africa meant that Hannibal, after 14 years, had to leave Italy to meet Scipio on the plains of Zama.
Based on the GBoH scenario by Carlos Gomez Ibanez.
The stage is set. The battle lines are drawn and you are in command. Can you change history? 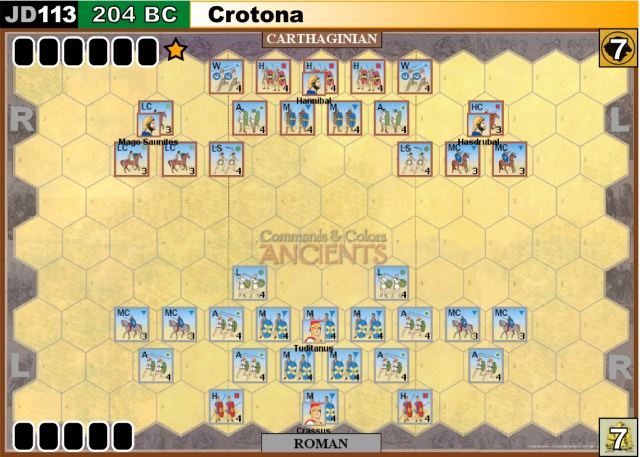