Historical Background
Following the Roman defeats at Ticinus, Trebbia, Trasimene and Umbria, the Senate elected Quintus Fabius Maximus as Dictator in command of all Roman Forces. Fabius followed a strategy of avoiding open battle with Hannibal so as to prevent any more disasters. But with Hannibal freely roaming Italy, conquering and plundering as he went, the Romans called Fabius back to Rome to explain himself. In his absence his Master of Horse Marcus Minucius Rufus initiated a successful skirmish action against Hannibal's army as it foraged around the town of Geronium. Ecstatic with this minor victory in a sea of defeat the Romans took the unprecedented step of appointing Minucius as a co-dictator with Fabius.
Fabius and Minucius did not get along and so they split the army in half. Each man recieved 2 legions and associated allies and each camped seperately near Hannibal at Geronium. Hannibal, seeing the Roman split and aware of the eagerness of Minucius for action, set a trap for him. There was a low ridge in the plain between the camps and Hannibal posted his light infantry there in full view of the Romans. Around the ridge the ground had many dips and hollows and in these Hannibal concealed 5,000 infantry and 500 cavalry with orders only to emerge when the Romans were committed to action on the ridge. As expected Minucius took the bait and advanced on the ridge with his army. Hannibal responded by moving his own army forward in support. When Minucius was fully engaged the hidden troops attacked the Roman rear where they were joined by Numidian cavalry.
Minucius was now in dire straits, but Fabius had been observing the action and his army was ready. Fabius attacked the encircling Carthaginians, and seeing that they would be trapped between two Roman forces they fled leaving the battered army of Minucius to escape. Both sides now retired to their respective camps. The Romans should have learnt their lesson that they could not at this stage beat Hannibal in the field. They did not. For the following year's campaign they raised an enormous army of approximately 80,000 men and committed them to the catastrophe at Cannae.
The stage is set. The battle lines are drawn and you are in command. Can you change history? 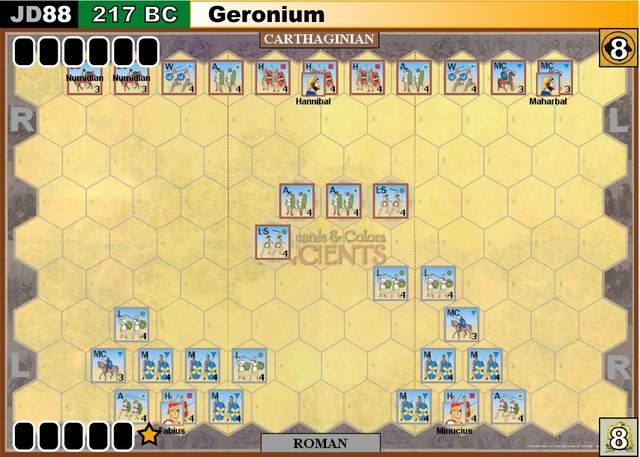 Victory
8 Banners
The Carthaginian player wins automatically if a Roman unit has not ended its turn on a hill hex within the first 8 Roman turns.

A unit scores 1 victory banner while it occupies a hill hex. The banner is lost if the unit is no longer on the hill. The Carthaginian player therefore begins the game with 4 victory banners.

Hannibal and the Carthaginian units on the I  hexrow may not be attacked or odered until a turn ends with a Roman unit on a hill hex or on a hex of hexrows G, H or I.

The Carthaginian player must declare an ambush at the start of his/her turn within 3 Carthaginian turns after Hannibal is able to be ordered. Once the ambush is declared the Carthaginian player places 2 medium infantry units, a medium cavalry unit and a leader (Mago), attached to one of the units, in any vacant hexes (not adjacent to each other) within 2 hexes of, but not on, a hill hex. If the ambush is not declared within the specified time, or any units can't be placed, the un-placed units are eliminated.

Fabius and the 8 units around him may not be ordered or attacked until either after the ambush is declared or the 3rd Roman turn after Hannibal is capable of being ordered, whichever occurs first. You may wish to use red or purple Roman blocks for these units..