Historical Background
Sardinia had been a Carthaginian province for centuries until the turmoil of the Truceless War (241-238) allowed Rome to opportunistically seize the island. This incident fed the hatred of Hamilcar Barca and his sons for Rome. While Hannibal was crossing the Alps to invade Italy, the agent Hanno slipped onto the island to foment a tribal rebellion. After Hannibal's great victory at Cannae, Hanno instigated an island-wide uprising under King Hampsicora and sent messengers to Carthage for support to capture the weakly garrisoned island. An expedition under Hasdrubal the Bald was delayed by a storm. While Hasdrubal was re-fitting his fleet, the Romans scraped up a reinforcing legion under the septuagenarian noble Titus Manlius Torquatus, who was already on the island when Hasdrubal finally arrived. The two armies met near Caralis. Hasdrubal, with about 20,000 men and 20 elephants, posted his Sards on one wing and his African and Balearic expeditionary forces on the other. Torquatus grounded his fleet and pressed his sailors into service to swell his ranks to 22,000 foot and 1200 horse. The fighting was fierce and prolonged. Eventually, the Sard wing collapsed and Hanno's African wing, which had been fighting well, was taken in the flank and also routed. Reports said 12,000 Sardinians and Carthaginians were slain and about 3700 men, including Hasdrubal and Hanno, were taken captive. Hampsicora committed suicide when he learned that his son Hostus had been killed in the fighting. Sardinia would remain in Roman hands.
The stage is set. The battle lines are drawn and you are in command. Can you change history? 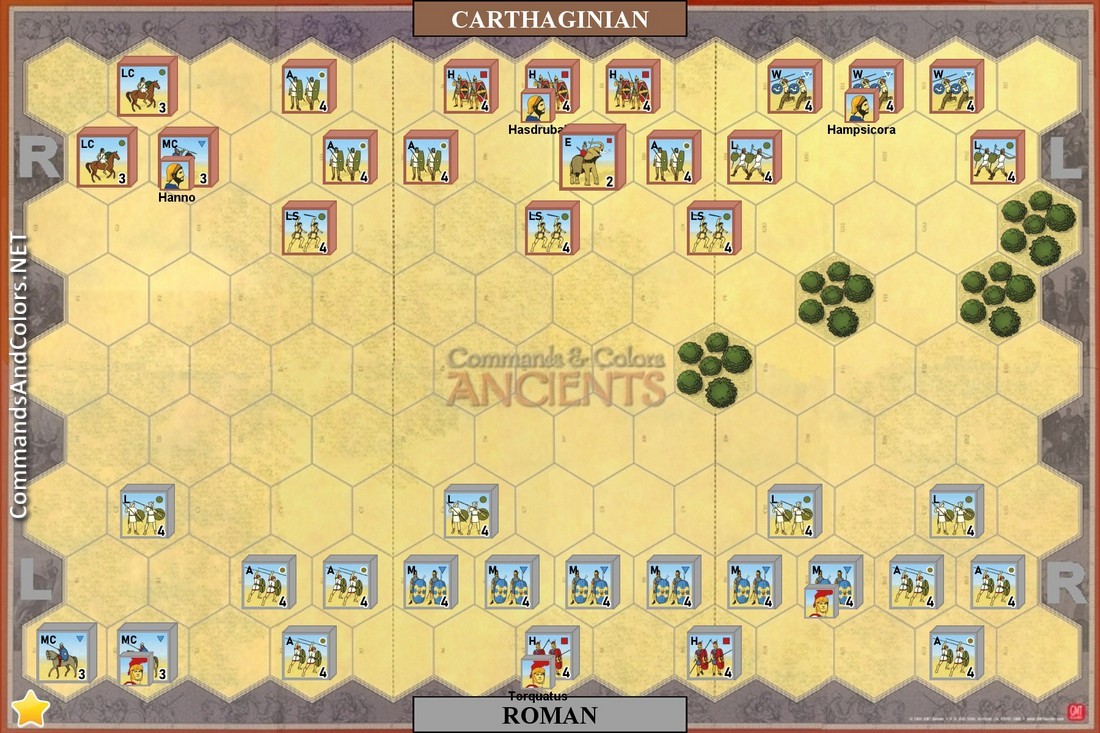