Historical Background
Following his victory at Agathocles' Tower, Scipio Africanus was penned in when Hasdrubal Gisgo and Syphax arrived with two large armies. Unable to face them in open battle, Scipio destroyed these armies with a treacherous night attack after feigning peace talks. A few months later, Scipio defeated these commanders once again at Great Plains. After the victory, Scipio dispatched his deputy Laelius, along with the Masinissa, to pursue Syphax.
Laelius was given most of the Roman cavalry and velites, along with a few cohorts of legionnaires, a total of 1,800 horse and 6,000 foot. Another 1,800 Numidians, mostly Massyles, had rallied to Masinissa. For fifteen days Laelius pushed across the desert in pursuit. Meanwhile, Syphax had fallen back to his capitol Cirta, to raise an army for a last stand. He managed to put 8,000 foot and nearly 5,000 horsemen in the field, but this army was raw and untrained. The infantry included some Roman-style cohorts, organized by the Roman centurion Statorious, who had joined Syphax in 213. When Laelius arrived outside Cirta, Masinissa charged impetuously. Syphax initially had the best of the fight, but as the Roman cavalry and infantry came up, the tide began to turn. Syphax rode to the forefront to rally his faltering troops, but his horse was killed and he was thrown and captured. Leaderless, the Numidian army broke. Masinissa brought Syphax in chains to Cirta, and the city surrendered.
The stage is set. The battle lines are drawn and you are in command. Can you change history? 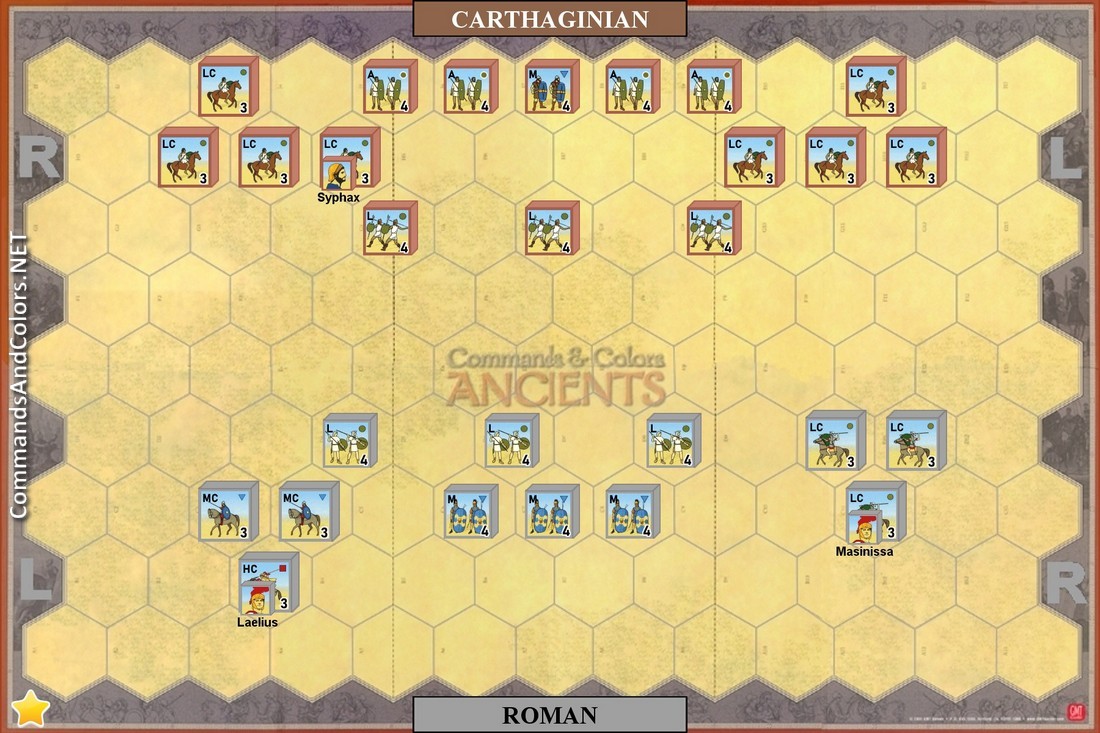 mk20336 replied the topic: #1882 5 years 4 months ago
The only "not all-cavalry" scenarios from C3i #21.
Again, very interesting disparity - more Carthaginians, but less cards, less leaders and worse initial placement. No wonder, they usually loose as in my game against stormwalker (5-2 for me as Romans). What is really nice in that scenario is power of light troops, so often underestimated and undervalued...
Read More...