“A Desperate Struggle”: The Second Battle of Capua 211 BC

Scenario Notes: This is a rather unusual battle scenario involving a relief attempt by Hannibal of the second Roman siege of Capua. Hannibal brought his Carthaginian Army from Apulia and made an attack on the Roman lines about Capua coordinated with a sortie by the besieged Capuans and the Carthaginian garrison of the city. In the close-run battle that followed the Romans managed to beat off the dual moves to break their siege lines from both within and without. Hannibal than immediately marched on Rome, but was unable to draw the bulk of the six Roman legions about Capua from their siege. Capua eventually surrendered from hunger to the Romans some time later—and ending that featured a mass suicide among members of the Capuan Senate who had backed the alliance of their city to Carthage. The scenario requires a double set of terrain tiles out of the C & C Ancients game to represent the Roman works and camps.

Historical Background of The Battle:
“Sending several couriers to penetrate into Capua (of whom one managed to do so) Hannibal gave his friends within the walls instructions to make a sortie at a given hour on the next day, while he would assault the lines from the outside at the same time. He proposed to debouch from the northern slope of Mt. Tifata and attack the Roman lines on the north of Capua.”
“Hannibal appeared at the time stated in front of the Roman intrenchments. The Capuan army made a sortie en masse from the city-gate…aided by the Carthaginian garrison under…Bostar, while citizens on the wall made a horrible din with brass vessels…At first this joint attack—which was made suddenly—came near to overcoming even the perfect defenses of the Roman lines, for the Romans were not certain …from which quarter to look for the attack. But recovering themselves Appius undertook to hold head against the Capuans, while Fulvius, with the bulk of the army, turned on Hannibal. The triarii, extraordinarii, and velites were left to man the walls of the camps, as well as the lines of circumvallation. …”
“The task of Fulvius was far from being an easy one. When he saw Hannibal descending the road from Mt. Tifata he seems to have taken the hastati and princeps of the three consular armies, nearly forty thousand men, to have sallied from the entrenchments and drawn up in two lines with his cavalry on the wings. Hannibal had drawn up his whole force in one phalangial line, the elephants behind, and the….horse, four thousand strong …on the flanks. “
“Hannibal took the initiative. The shock was delivered with his usual impetus and received with equal stoutness. So bold, however were Hannibal’s men that a simple phalanx of the old Spanish infantry followed by its quota of elephants, forced its way through the sixth legion in the centre. If Hannibal could have had enough men to form a second line or a reserve, he might have pierced through Fulvius’ defense and have
penetrated the lines. But the Roman maniples closed up again after the Spanish troops had broken through, and, under the splendid exertions of Qunitus Navis, a centurion of gigantic stature, who seized a standard and led on the men, and of Marcus Atilius, the legate, they shut out the brave Spaniards from retreat, while reserves from the camp…staunchly defended the intrenchments against them. The elephants fell into the ditch and were killed; and after a desperate struggle , the Spaniards were surrounded , and died to the man, arms in hand. The Romans, in fighting of this kind, had no superiors. There was no room for maneuvering.”
“Hannibal, seeing that his task was not to be accomplished, for the rest of his line had not succeeded in making a distinct impression, sounded the recall. He withdrew in perfect order, the horse from the flanks closing in behind the troops to cover their retreat. The Romans did not follow him up. He had undertaken the impossible, out of fidelity to his Capuan allies. Against intrenchments, with fewer men, and those of less good material, he had no chance whatever of success.” (Above selections from pages 479 to 482 of T.A. Dodge’s 1891 masterwork Hannibal ) 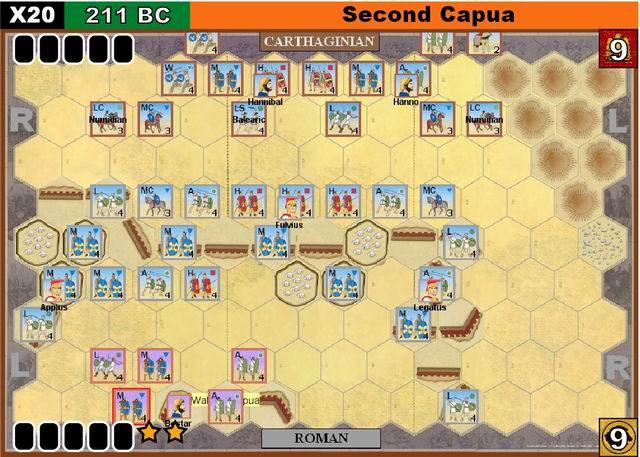 Victory:
Victory for both sides is 9 Banners—however the first loss by the Carthaginian Player of a unit from the Capuan Army is ignored for Victory purposes, as is the first loss of a Roman light unit (Light Infantry or Auxilia). The Roman Player scores 3 Banners if the Hannibal Leader unit is eliminated from the map. The Carthaginian Player scores 2 Banners if at any point in the game one of its units occupy a hex in one of two Roman Camps (one Camp consists of: E1/E2,/D1 the other: D7/D8/E8) without a Roman unit in one of the other two hexes of that camp. Only 2 Banners for one camp (not both) may be scored for in the course of the game. Additionally the Carthaginian Player receives 1 Banner for each infantry or cavalry unit from Hannibal’s relief army that enters a hex adjacent to the “Walls of Capua” up to a maximum of 3 Banners.

1) Retreat and Evasion: (these rules were added due to the unique layout & character of this battle)
a) Retreats: Units in this game, if retreated due to a flag result, only retreat one hex if infantry, or one or two hexes (owner’s choice) if cavalry units per flag result inflicted and not ignored or canceled. Retreats may be in any direction (if a two hex retreat, however it must end 2 hexes away) as long as the retreat route does not pass adjacent to an enemy unit—units may retreat into hexes adjacent to enemy units if they have no other path, but lose one block per such hex entered.
b) b) Evasion: Units on both sides may evade in any direction if allowed to evade per the rules, but the hexes they evade into or through may never be adjacent to enemy units--.Leaders if they evade/retreat and survive, evade simply to the nearest hex occupied by a friendly unit (owner picks if two or more friendly units equidistant)
c) Minimum Distance: In all retreats or evasions in a) and b) above the retreating or evading Player must have his unit end the retreat or evasion the exact number of hexes away from the original hex as he retreated or evaded through or into (no “crooked” retreats or evasions allowed).

2) Command Rules:
A Leader attached (stacked with) a friendly unit may cancel one sword hit on the unit in lieu of canceling a retreat hit.
Hannibal may cancel both a sword and a retreat hit if stacked with a friendly unit.
A unit involved in close combat with the support of a Leader may only count one helmet hit amongst those rolled to inflict a hit on an opposing unit.

4) Balearic Slingers: The Carthaginian Light Slinger unit is made up of elite Balearic mercenaries, when firing their missiles at Roman Light (Green) units they hit on swords—in battle back only they also hit on swords.

8) Carthaginian Initial Off-map units
Three (3) of the initial units of Hannibal’s Relief Army (one each of Elephant, Auxillia, Warrior) start off of the map. Starting with the second Carthaginian Player-turn the Carthaginian Player may choose to bring them onto the map. Before playing his card for a Player-turn he may chose to place the off-map units in any vacant map-edge hex from I3 through I10. They may than be ordered by the card the Carthaginian is about to play as appropriate. Once on the map they cannot leave it again save by elimination.