“All that befell both peoples, the Roman and the Carthaginian originated from one effective cause—one man and one mind—by which I mean Hannibal.”
Polybius, Book IX The Rise of the Roman Empire

“Pride of Carthage”
The Battle of Cannae 216 BC

Gamers Note: I put this special bonus ‘deluxe’ scenario together because, quite frankly, the scenario in the rules booklet is obviously unsatisfying for gaming out this classic historic battle of encirclement and annihilation. The Romans still have some chance to pull out a victory with these rules, however, given the luck factor inherent in the system and the possible results of capitalizing on poor choices and bad luck on the part of the Carthaginian Player. Also the victory conditions are more stringent for Carthage. In order to claim the win the Roman Army has to be all but totally destroyed. The scenario has a focus on the main part of the Cannae battle, from the point at which that savage and bloody struggle between the two masses of contending troops began in earnest. 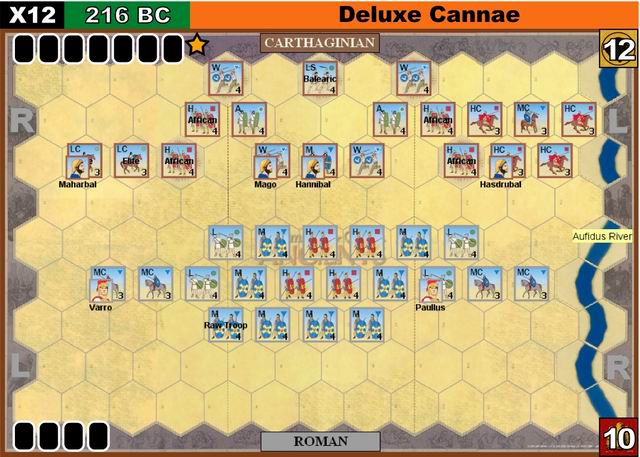 Victory:
Carthaginians need to get to 12 Banners to win—the Romans need only 10 Banners, but score 3 banners (instead of 1) if they eliminate Hannibal, however if the unit Hannibal is with is eliminated he automatically evades from that hex without having to roll for elimination. Additionally the Roman can score up to one(1) Banner for each of the following hexes when first entered at any point in play by a Roman unit: I6, I7, I8. (not by just a Roman Leader).

2) Roman Battle Plan: The Command Card played in the very first Roman Turn of the game must be a Line Command card.

4) Leader Special Rules:
A Leader attached (stacked with) a friendly unit may cancel one sword hit on the unit in lieu of canceling a retreat hit. Hannibal can cancel both a retreat and a sword hit if present
A unit involved in close combat with the support of a Leader may only count one helmet hit amongst those rolled to inflict a hit on an opposing unit.
A Carthaginian unit in the same hex with Hannibal can count up to two helmets when inflicting hits in close combat or battle back rather than just one.

5) Raw Roman Troops & the Volturnus Winds: The bulk of the Roman troops were recently recruited facing a dusty wind blowing into their eyes, all Roman Medium Infantry battles back “normally” with only three dice (instead of the usual four).

6) Elite Carthaginian Troops: In contrast to the Romans many of Hannibal's men (perhaps up to half or more of his force on the field that day) were the hard-bitten fighters that had followed him from New Carthage in Iberia over the Alps to the Italian plains. The victors and survivors of many a hard fight both in Spain and Italy.
a) Carthaginian Auxillia may evade if attacked in close combat by Roman Medium or Heavy Infantry.
b) The Carthaginian Light Slingers are elite Balearic mercenaries, when firing their missiles at Roman Light (Green) units they hit on swords—in battle back they also hit on swords.
c) The Carthaginian Light Cavalry are the elite Numidian cavalry—practically born in the saddle, the veterans of countless skirmishes and battles---in battle back they hit on swords.
d) The Carthaginian Heavy Cavalry units are a well-mounted and extensively trained & experienced mixture of Gallic tribal fighters and Spanish mercenaries, salted with elements of North African Liby-Phoenician mounted nobility. They may move three hexes per turn when ordered and may evade as if they are Medium Cavalry.

10) Optional Rule: Hannibal’s ‘Punic Trick’
“Meanwhile on the Roman left, where the allied horse confronted the Numidians was also engaged…About 500 Numidians pretended to desert: in addition to their weapons they concealed swords under their tunics and rode up to the Roman line with their shields sling behind their backs. Suddenly dismounting, and flinging their javelins and shields on the ground, they were taken into the line by the Romans, and then conducted to the rear, where they were ordered to remain. While the general action was developing they kept quiet enough; but as soon as no one in their vicinity had eyes or thoughts of anything but the progress of the battle, they picked up their shields from where they lay scattered amongst the heaps of dead, and attacked the Roman lines in the rear, striking at the soldiers backs, hamstringing them, and causing terrible destruction, and even more panic and disorder.” (from Livy Book XXII)
At the very start of any Carthaginian turn—Carthaginian Turn 3 or later only, the Carthaginian Player may declare “Punic Trick” ---and he proceeds to indicate any two Roman foot units on the Roman left flank that are adjacent to each other to undergo a ‘special attack’. The Carthaginian Player rolls 2 dice for each attacked Roman unit and hits on the units’ color, helmet, or swords—one block is removed per hit. There is no battle-back or any other post ‘special attack’ activity by either side & the Carthaginian Player proceeds with the rest of his Player-Turn normally.

After Cannae: The Gift of the Pride of Carthage
(The Scene: The Council chamber of Carthage in late 216BC. Hannibal’s younger brother Mago stands before the assembled Carthaginian oligarchs giving an accounting of the recent victory over Rome at Cannae and demanding assistance in Italy from the senators)
…Another voice, one of the younger Hannons’ added, “Your brother did not ask our guidance when he began this war; why now seek our help to finish it ? This war is not even truly Cartage’s doing. This is Hannibal’s fight, and the outcome rests on his head alone.”
“Does all the glory go to him in victory then?” Mago asked.
The answer came from another section of the chamber. Hadus did not rise. He spoke softly but somehow his voice carried all the authority it needed. “Hannibal will get what’s Hannibal’s”, he said. “But let us not speak out of turn. You said you brought proof young man. Show it to us.”
Mago seemed to debate this a moment, but he nodded that the time was right enough. He tilted his head and projected his words high. “Honorable sirs. You are quite right. I will show you what I’ve brought. I’ll do just that. I bring you a present from by brother, Hannibal Barca, son of Hamilcar, Pride of Carthage !!”
His voice rose toward the end of the sentence so that he shouted those words. This was obviously a signal, for a moment later there was a commotion in the foyer outside the Council courtyard. Several men, slaves naked from the waist up…pushed and tugged a heavily laden cart into the center of the Council. It was covered in a thick cloth that hid its contents, hinting that it was piled high with some sort of booty. Mago paced around the cart a moment, running a hand over the cloth.
“When we report to you the greatness of our victory at Cannae I hear many questions. Some doubt the facts as they have been relayed to them. Some ask for numbers, for proof, for some way that you here in the safety of Carthage can understand what Hannibal’s army has accomplished in your name. But how to bring the reality of our victories in the field to this chamber? And how to name with certainty the number of enemy dead? Who but Baal knows the exact number? I’ve yet to count them myself, but honorable men if you would know the number, feel free to count these, taken each from the hand of a dead Roman citizen! A gift from Hannibal and the field of Cannae!”
With theatrical grandeur Mago yanked the sheet from the wagon. Almost simultaneously, the slaves tilted it from the back. The contents poured onto the stone slabs in a clattering avalanche. At first it was hard to tell what the objects were in the unsteady light. They shimmered and bounced on the stones, rolling, skipping, and sliding. Strangely enough, it was a single item out of those thousands that made it clear. It rolled forward away from the others, an erratic path that took it near the councilors’ benches before it turned every so slightly and arced back. Mago with quick finger , snatched it up and held it aloft. It was a gold ring. One of thousands. Roman rings, so many that the sight was unbelievable.
The councilors were silent. The hush was strangely pronounced after the clattering of the rings. Mago stood beaming, watching the surprise and awe and dawning understanding on the men’s faces. He forgot the sense of reserve his brother so often exemplified. He could not help himself. He grinned from ear to ear.
Nor did he stop smiling for several days, not until the Council ordered him to return to the field with a new army. But, despite all he revealed to them, they refused to let him return to Hannibal in Italy. Instead they sent in to Iberia…Hannibal, they told him, would manage without him for a little longer…
(The above selection is from the excellent book: Pride of Carthage a novel ‘inspired’ by the events of the 2nd Punic War. David Anthony Durham authored that work.)