Scipio and Masinissa vs Hasdrubal Gisgo and Syphax

Historical Background:
“….Now Syphax and his friends had at first planned to continue their retreat and return home, but it so happened that near the town of Abba they met a contingent of Celtiberians over 4,000 strong who had been hired by the Carthaginians, and the sight of these reinforcements raised their spirits sufficiently to persuade them to halt their retreat. At the same time the young girl Sophonisba, who as I have mentioned was Hasdrubal’s daughter and was married to Syphax, implored her husband to stay and not desert the Carthaginians…In the end the Numidian prince allowed himself to be persuaded and yielded to her entreaties. The arrival of the Celtiberians also put fresh heart into the Carthaginians. Their numbers were reported…as 10,000 instead of 4,000 and it was said that their courage…made them irresistible in the field…the spirits of the Carthaginians suddenly rose, and their confidence that they could once more take the field against the enemy was redoubled. Finally within thirty days the Carthaginian troops pitched camp…together with the Numidians and Celtiberians in the region known as The Great Plains; their combined strength amounted to not less than 30,000 men.”
“When news of these events reached the Roman camp Scipio immediately decided to move against the enemy, and after issuing orders to the forces which were besieging Utica…,he started on his expedition, the whole army being equipped in light marching order…On the fifth day he reached the Great Plains…he pitched his camp for the first day on a hill some four miles away. The next day he came down and drew up his army less than a mile from the enemy, his cavalry being stationed in front to protect the infantry. For the next two days both armies remained in their positions and tested their strength in some minor skirmishing operations; then on the fourth day both generals led out their forces and drew them up for battle. Scipio simply adopted the regular Roman formation…Of his cavalry he stationed the Italians on the right and the Numidians under Masinissa on the left. For their part Syphax and Hasdrubal placed the Celtiberians in the centre opposite the roman maniples, the Numidians on the left, and the Carthaginians on the right.”
“In the first charge Syphax’s Numidians were driven back by the Italian horse and the Carthaginians by Masinissa, for their spirit had been broken by the earlier defeats they had suffered. The Celtiberians, on the other hand, fought splendidly and held their ground against the Roman centre; their ignorance of the country ruled out any hope they could escape by flight, and their treachery to Scipio any chance that their lives would be spared if they were taken prisoner. Scipio had never committed any act of hostility towards them during any of his Spanish campaigns, and so they were regarded as having broken faith with him in coming to fight on the Carthaginian side. At any rate, when the wings gave way, the whole of the contingent was encircled by the princeps and triarii and cut down where they stood, except for a few survivors. Thus perished the Celtiberians, but they nevertheless rendered the greatest service to the Carthaginians not only during the fighting but also in the rout, for had the Romans had not encountered their resistance, but immediately pursued the fugitives, very few of the enemy would have got away. As it
was, thanks to their last stand Syphax accomplished his withdrawal to his own territory in safety, and Hasdrubal was also able to reach Carthage with the remnants of his army.”
(From Book XIV of Polybius’ Rise of the Roman Empire written in the 2nd century BC) 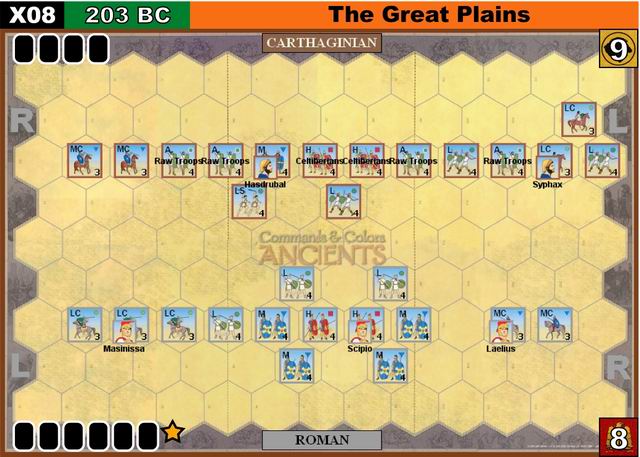 2) The two Carthaginian Heavy Infantry units are the Celtiberians—the Celtiberians always ignore the first flag result rolled against them—this is in addition to the normal possible cancellations of retreats for other reasons.

3A) Special Leader Rules & Optional Rules
A Leader attached (stacked with) a friendly unit may cancel one sword hit on the unit in lieu of canceling a retreat hit.
A unit involved in close combat with the support of a Leader may only count one helmet hit amongst those rolled to inflict a hit on an opposing unit.

3B) Optional Rule: Army integrity---Each side in this game has two allied forces one of Numidian nationality and the other the main power-Roman or Carthaginian ---a leader from one force provides no benefit in combat to a unit from the other allied force. See order of battle above for the breakdown of each allied force—a standard wargaming half-inch counter or bit of paper with an “N” on it could be placed with each Numidian unit or Leader to indicate the force they belong to at game start.

3C) Optional Rule: Outflanking---This is an easy way of introducing facing and flanks to the game with little fuss—it can be retrofitted to other scenarios where appropriate:
A unit is said to be “Outflanked” if it is surrounded in all six adjacent hexes by either enemy units, or hexes adjacent to an enemy unit. The presence of friendly units does not negate an “Outflanked” situation in any way. Units on the board edges (and not surrounded by six adjacent hexes) cannot be “Outflanked”.
Effects of being Outflanked: “Outflanked” units when battling back roll only half the normal number of dice they would be normally entitled to rounded up—to a maximum of only two dice—“Outflanked” units when battling back never hit on helmet rolls even if supported by a leader. A unit’s “Outflanked” situation is judged at the instant it battles back.