Historical Background
Following the victory of King Syphax at Tispasa, many Numidian tribesmen flocked to his banner and his army swelled to twice its size. The Carthaginians reacted strongly by first ordering Hasdrubal Barca back from Spain with an army, and then by engaging the services of King Gaia, the leader of the eastern Numidians (Maesulians) and a natural rival to Syphax. Gaia dispatched his son, Masinissa, with a force of light infantry and cavalry to rendezvous with Hasdrubal in western Numidia.
Syphax marched his army to meet Hasdrubal and Masinissa on a desert plain just south of Siga. Syphax's crack Numidian cavalry was matched by that of Masinissa, and his new legionnaires by Hasdrubal's veteran African, Iberian and Balaeric troops. After a hard fight the rebel army was routed and suffered heavy casualties.
(Battle based on GBOH module "Syphax: Lion of the Desert" in C3i Nr 20 by Dan Fournie.)
The stage is set. The battle lines are drawn and you are in command. Can you change history? 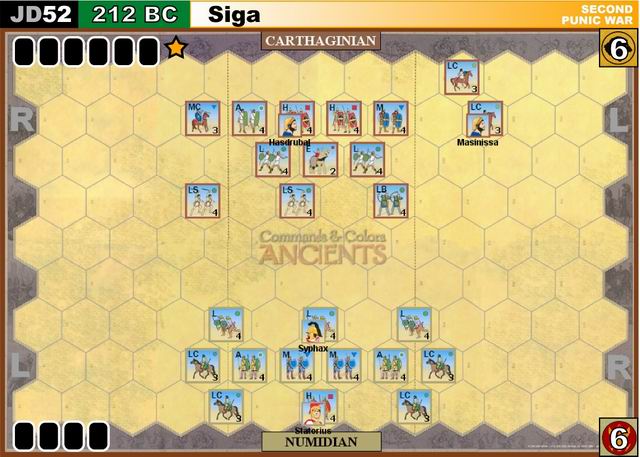 Special Rules
Statorius may only confer leadership benefits, support and orders to heavy and medium infantry units. Use a Roman leader to represent him.

All light cavalry units may ignore 1 sword and 1 retreat banner.

Numidian auxillia infantry units may not use missile fire.