Historical Background
With the Scipio brothers hard pressed fighting three Carthaginian armies in Spain, they struck on a plan to cause trouble in the Carthaginian backyard and try to draw off some of their resources. They sent three centurions to negotiate with King Syphax of the Masaesulian (western) Numidians. Syphax was eager to throw off the Shackles of Carthaginian rule and agreed to an alliance with Rome, provided one of the centurions remained in Africa to train his infantry to fight as Roman legionnaires.
The centurion Quintus Statorius took on the task and quickly drilled the Numidians in Roman battle tactics and manoeuvres. Syphax, pleased with the results, added his own light cavalry and infantry to the new force and declared his independance from Carthage.
Carthage responded by raising an army of local militia and heavy cavalry supported by some elephants. This was usually enough to scatter any rebel tribal army. In the fall of 213 BC the two armies met in the open desert near Tispasa. The Numidian light troops kept the Carthaginian elephants and cavalry at bay while Statorius and his legionnaires swept the Carthaginian militia off the battlefield in full rout, swiftly followed by their cavalry and all pursued by the crack Numidian light cavalry for a shock (at least to Carthage) victory.
(Battle based on GBOH module "Syphax: Lion of the Desert" in C3i Nr 20 by Dan Fournie.)
The stage is set. The battle lines are drawn and you are in command. Can you change history? 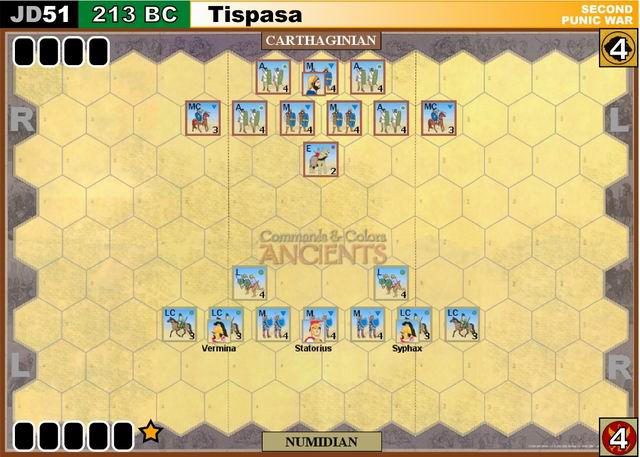