The Battle of Hippo Regius 205 BC (??)
An inter-Numidian Conflict

Historical Background:
“For some days, while he was curing his wound with herbs, Masinissa lay hidden in a cave, living on what his two companions were able to bring him. Then with incredible audacity as soon as the wound was closed and he thought he could endure the movement of a horse, he set out to recover his kingdom. On the way he collected some forty horsemen, not more, and thus accompanied rode on into Maesulian territory, now openly proclaiming his identity. And such was the strength of feeling aroused by both his former popularity and the unexpected joy of seeing safe and sound the king they had thought to be dead, that within a few days an army of 6,000 foot and 4,000 horse flocked to join him. He was now not merely in possession once more of his father’s kingdom but able to make devastating raids upon the tribes allied to Carthage and on the dominions of Syphax-the territory of the Masaeulians. Having thus provoked Syphax to war, he established himself in a very favorable position on a chain of hills between Cirta and Hippo.”
33. “ Syphax now realized that the threat was too serious to be entrusted to his subordinate officers; he accordingly sent a section of his force under his young son Vermina with orders to make a detour and attack the enemy from the rear while his attention was occupied with the king’s army in front of him. Vermina, who was to make the surprise attack marched under cover of darkness; Syphax broke camp at daylight, marching by a route in full sight of the enemy and making no attempt to conceal his intention of a direct encounter. When he thought enough time had elapsed to allow Vermina’s column to reach their objective, he began to move into action: relying on his superiority of numbers, and the surprise attack about to be delivered in Masinissa’s rear, he advanced towards the enemy in battle order up a gentle slope of a hill facing him. Masinissa also prepared for action, basing his hopes chiefly on the strength of the much more favorable position from which he would be fighting. The battle was a savage one and the issue for a long time in doubt, Masinissa having the advantage of position and the valour of his men, Syphax in his greatly superior numbers. That enormous army, divided as it was into two sections, one pressing on the enemy’s front, the other having moved round to cover his rear. Masinissa’s men , penned in both front and rear, had not even a chance to escape. Most of his force, both mounted and unmounted, were either killed or captured. But there were about 200 horsemen, whom he succeeded in rallying close around him, and these he divided into three troops and ordered to make a breakthrough, naming a rendezvous where, after getting away in any direction they could, they were…to meet. Masinissa himself broke through the flying spears and escaped in the direction he determined on; two of his troops…failed to get through, one of them surrendering, the other…being overwhelmed with missiles and wiped out. Vermina pressed hard on the fugitives’ heels, but Masinissa himself with his sixty horsemen made their way to the Lesser Syrtis, where….he remained…until the arrival in Africa of Laelius and the Roman Fleet. “ (From Livy’s History of Rome Book XXIX)

Scenario Note: This is an interesting battle: both sides were composed almost exclusively of light troops, tribesmen basically, from the two largest Numidian kingdoms in North Africa involved in an all-out high stakes battle. 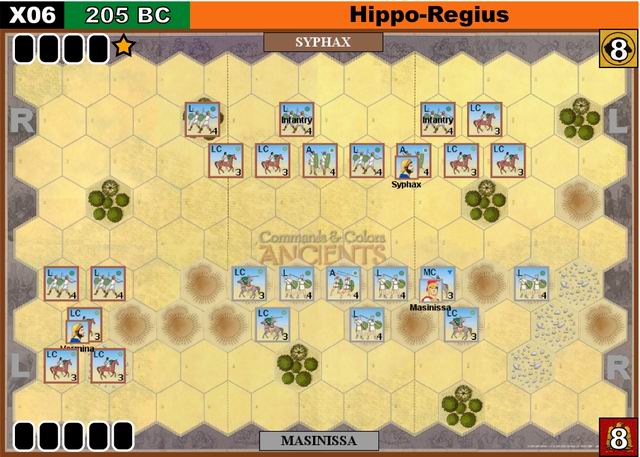 —But the Masaeulian units (and Vermina) that start on or adjacent to Vermina may not move on the first three Masaeulian turns of the game.

1) Unit Changes:
a) Syphax’s slingers are Light Infantry and are treated as such throughout the game.
b) Masinissa’s Medium Cavalry unit may always attempt to evade if possible, this unit also has the same missile capability of a Light Cavalry unit.
c) The Light Cavalry of both sides may only move or retreat up to three hexes instead of the normal four hexes.

2) Movement restrictions:
During the first three Masinissa’s Maesulian player turns units of that player may not enter any hex in their left flank zone—They may fire missiles or conduct close combat & battle back into such hexes.

3) Missile Fire Uphill:
If a missile unit achieves a hit (color or retreat) when firing up hill, roll one normal six-sided die—on a roll of “5-6” the hit is canceled.

4) Downhill Battleback
A Light Infantry unit that battles back against a unit downhill from it rolls three dice instead of the normal two dice—regardless of which terrain the unit is battling back into.

5) Palm Tree Terrain Tiles:
A Light Infantry unit that battles back from a Palm Tree hex rolls three dice instead of the normal two dice. Units entering a Palm Tree hex via movement count that hex as two hexes rather than the normal one for movement purposes. Palm Tree hexes also block the line of sight for missile fire. These are the only terrain effects of a Palm tree hex tile.

6) Masinissa’s Escape & Possible Demise:
If Masinissa manages to evade off the map—per the normal leader evasion rules- his side immediately scores one banner. If he is eliminated in combat the Syphax side scores two banners instead of the normal one banner.