Historical Background:
“That year, it seemed, fortune was piling one disaster upon another; for while these proceedings were still going on, more bad news arrived. The consul-elect, Lucius Postumius, had been killed in Gaul and his army wiped out. He was about to march by way of a desolate stretch of forest, known to the Gauls as Litana. On both sides of the track the Gauls had cut the trees in such a way that they remained standing but were ready to fall at the slightest impulse. Postumius had two Roman legions and had also enlisted such a number of allied troops from the Adriatic coast that he was entering enemy territory with a total force of 25,000 men. The Gauls were lying in wait for him on the edge of the forest, and as soon as he entered the stretch of the road prepared for the trap, they pushed over the trees at the end of the line. Down they came-all were nearly cut through at the base and were only precariously keeping upright-each tree bringing to earth its tottering neighbor, and all overwhelming, from both sides of the track at once, arms, horses, and men beneath…The greater number were killed by the falling trunks and broken branches, and the rest bewildered by the unexpectedness of the horror, were dispatched by the Gauls who were waiting, sword in hand, all round the fatal spot. A few only out of such a large force were taken prisoner: they had made for a bridge over the river, but found it already occupied, and were cut off. Postumius who was with them, fought to the end to avoid capture and was killed. The Boii stripped his body, cut off the head, and carried their spoils in triumph to the most hallowed of their temples. There they cleaned out the head, as their custom is, gilded the skull, which thereafter served as a holy vessel to pour libations from and as a drinking cup…The spoils from the battle were hardly less valuable to the Gauls than the fact of their victory….as there had been no attempt to escape and consequently no dispersal of military gear and equipment, everything else was found lying in place along the whole column of dead men.” (This selection is from Book XXIII of Livy’s: ‘The History of Rome From its Foundation’ originally written in the late 1st century BC) 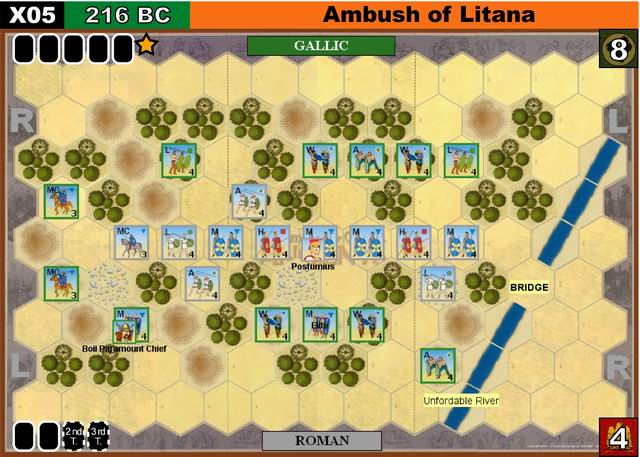 —The Gallic Player moves twice at the start of the game before the Roman Player takes his first move. The Players than take alternate turns as normal for the remainder of the game. Before first Movement resolve the one-time “tree fall” event per the special rules below.

Victory:
The Gallic Player needs to score 8 banners to win the historical victory. The Roman Player need only score 4 banners before the Gauls reach 8 banners to claim victory—such a result causes the Gauls to break off the attack thereby allowing the Roman survivors to flee the killing ground. The Romans can also win by exiting enough of their units/leaders (five or more) from the map so that the Gauls are unable to claim their 8 banners for victory by elimination.

Gallic Elite Warriors:
1) The two Gallic Medium Infantry units are treated as Warrior units for all purposes, but additionally have one added to their maximum dice (over and above any terrain considerations) when engaging in any kind of close combat (or battle back) for the very first time in the game.

Retreats and Evasion:
3) a) Roman units may not evade throughout this scenario
b) Gallic units may retreat/evade normally toward one or the other (not both at the same time) of the two long map edges, but must avoid, if possible, any retreat/evasion route that would bring the retreating unit adjacent to a Roman unit—Gallic units may use such a route of retreat/evasion adjacent to the Romans only if no other retreat route is possible.
c) Roman units, if forced to retreat via flag results may retreat in any direction as long as the unit ends the retreat the specified retreat distance from their pre-retreat hex. Roman units may not and can never retreat through clear hexes that have a Gallic unit adjacent to that hex.

Exiting the Map:
5) Gallic units/leader may exit the map via normal movement from their safe zone hexes. The exiting ordered unit, moves into the safe zone hex and may exit if it is able to move another hex—or can exit if ordered to move from the hex on a succeeding turn.
Roman units/leader may exit the map only from the following hexes B12, C13, A13, and D12 exactly like Gallic units from their safe zone hexes. Units may never evade or retreat off the map per the normal rules. Note that leaders may also retreat/evade only off these respective map edges per the rulebook. Exited units/leaders never return to play.

Special Terrain Considerations:
6) Gallic units treat forest hexes as clear for movement purposes only.
The Bridge hex may only be entered or close combated into from hexes E11 & C12, otherwise it is treated as clear terrain for all other rule concerns.

Surprise Effect:
7) Roman units, when battling back on Gallic Turns 1, 2, and 3 always roll one die less than their normal throws due to the affects of being suddenly ambushed amid falling trees. The Roman Player may not use a Line Movement Order card per the jargon on the card—instead only he (not the Gallic Player who uses the card normally) may utilize the card to move any two Roman units/leader (in reality there are no lines—this is an ambush situation).