Historical Background:
“Herdonia, which Hannibal no longer trusted, was destroyed, and its inhabitants sent to Metapontum and Thurii. The traitors who had corresponded with Fulvis, he executed. He then returned to Lucania and encamped on an eminence west of and near Numistro, proposing either to capture the place or make a bid for Marcellus to attack him. Marcellus who was essentially a fighter, seemed anxious to wipe out the defeat of his colleague, and moved from Samnium on Numistro and camped. The day after his arrival he drew up in the plain opposite Hannibal with his left not far from the town. He likewise marshaled his legions in two lines of cohorts, in each line two legions, and as usual the velites out as skirmishers and the cavalry on the flanks. Hannibal did the like, his right leaning on hills near the town, his heavy infantry in two lines, the Spaniards in the first, the Gauls and Africans in the second, with elephants between the lines and light troops and Balacrean slingers in front.” (From Theodore A. Dodge’s incomparable history: Hannibal originally published in 1891)
“First to engage were the Roman first legion and right ala against Hannibal’s Spaniards and Balearic slingers, his elephants being driven into the line after fighting had begun. For a long time neither side had the advantage. From early morning until nightfall the struggle went on, and then, when the frontlines were exhausted, the first legion was relieved by the third and the ala right by the left, while on the Carthaginian side fresh troops took over from their weary comrades, and immediately, by this accession of men in full bodily vigour of body and mind, the fighting which had begun to languish blazed up again in new fury. Darkness, however, separated the antagonists with the issue still undecided. Next day the Romans stood formed for battle from sunrise to until late morning, and when none of the enemy came forward against them they set about gathering the spoils at their leisure, and collecting and burning their dead. The following night Hannibal got silently on the move and went off into Apulia. When daylight revealed the enemy had gone Marcellus at once followed in their tracks, leaving the wounded at Numistro with a small garrison…” (This selection from Book XXVII of Livy’s: ‘The History of Rome From its Foundation’ originally written in the late 1st century BC) 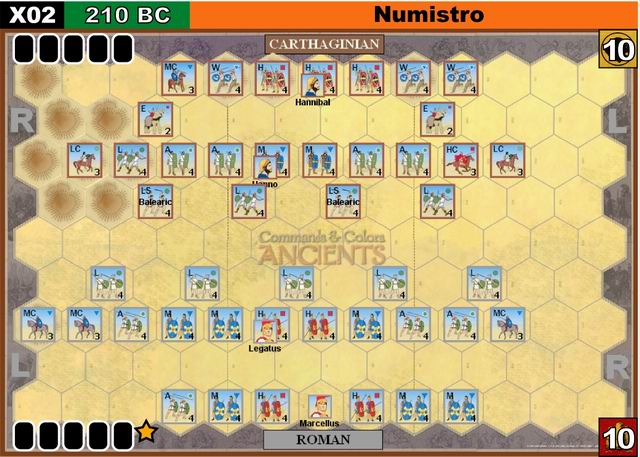 Victory: 10 Banners (but each side ignores and does not count the loss of the first Light Infantry unit or Light Slinger unit by his enemy for the purposes of victory at 10 Banners, plus the battle can end as a draw with no real ultimate loser —see rules in section 6 below for “Drawn Battle”). If Hannibal or Marcellus is lost in combat the side inflicting the loss gains two banners instead of the normal one banner.

1) The Line Movement Card may only be utilized to move a maximum of 5 linked infantry units and their attached leader(s). (Neither side in this battle seemed willing to commit all their forces in one go) Line Movement also provides a limited ability to rally infantry units. (See 2) below.)

2) Once in a player’s turn wherein he utilized the Line Movement Card has completed, but before the new card is drawn, the player rolls three dice in an attempt to rally eligible infantry units located within two linked hexes of any friendly leader (three linked hexes if Hannibal or Marcellus is the leader in question). The infantry units in question eligible for this type of rally attempt may not have just moved or engaged in any type of combat during that turn using the Line Movement Card.
Rally results:
Red, Green, Blue—an eligible infantry unit whose color matches that of the one rolled gains one lost block back. The rolling player picks which one if more than one of that type is eligible.
Helmet: The Player attempting the rally may nominate one eligible unit to get one lost block back.
Sword: The Player attempting the rally may nominate two eligible medium infantry or heavy infantry units only, each gets one lost block back.
Retreat: The Player attempting the rally may nominate one eligible unit able to retreat to get one lost block back. The unit conducts a normal retreat and receives a block. The nominated unit in question may retreat out of the 2 hex-linked radius from a friendly leader.
Elephant and Cavalry units may not rally using this method. No infantry unit may gain back more than one block in a turn via this procedure.

3) A Leader attached (stacked with) a friendly unit may cancel one sword hit on the unit in lieu of canceling a retreat hit. Hannibal and Marcellus can cancel both a retreat and a sword hit if present.

4) A unit involved in close combat with the support of a Leader may only count one helmet hit amongst those rolled to inflict a hit on an opposing unit. Units stacked with Marcellus or Hannibal can count up to two helmets when inflicting hits rather than just one.

5) The Carthaginian slingers are elite mercenary slingers from the Balearic Islands. Legend has it that they trained from boyhood to throw stones and lead pellets at high velocities with several types of specialized slings. Supposedly, as the annalists tell it, these rugged islanders insisted on being paid for their services with women instead of the silver or gold other mercenaries received. When firing from a 2 hex range Balearic slinger units hit on swords in addition to the green side when firing only at Roman Light Infantry and Auxillia.

6) Drawn Battle Rule: Historical Notes: Although both sides probably claimed victory at the end of a long day of bloody combat the battle in its tactical and strategic effects was probably pretty close to a draw. Likely a few thousand men on each side were killed or badly wounded leaving the two armies slightly smaller, but largely intact.
The Battle ends in a Draw for both sides when:
a) One side reaches 10 or more banners –the other side is than given until the end of his next turn to also inflict 10 or more banners on the opponent—if he succeeds in managing to reach that goal the battle is a draw and neither player wins---if he fails to get to 10 or more banners by the end of his next round he loses and the player who reached 10 banners first wins.
b) If the Card: “I Am Spartacus” is played twice for orders during the game, the game ends in a draw upon the second Play of the card---don’t even play the card out—game over as a draw. Neither Player may start the game with “I am Spartacus” in his initial hand. Reshuffle the deck after both sides draw their initial hands.

7) Discarding cards & the “Pass Turn”: Each Player may—up to three times per game—declare that he is taking a “Pass turn” at the very start of his turn. He must discard three cards of his choice and then immediately replaces the cards with three more from the top of the draw deck—Reshuffle only the existing deck after a “Pass turn”. During a “Pass Turn” no card is played and no units may move or engage in combat---Play is turned over to the opponent’s turn as soon as the new cards are received. A Player may not announce a “Pass Turn” in the immediately following turn after his opponent has declared one. Neither Player may declare a “Pass” in his very first turn of the game. Neither Player may declare a “Pass” during two of his own successive turns in a row. If a player no longer has his supreme leader (Hannibal or Marcellus) on the map, he may no longer declare a “Pass turn” regardless of how many of the three “Pass turn” ability he has remaining unused.

8) Optional Rule: “Relieving the Front Line”--- The Line Movement Card may not only be utilized to move a maximum of 5 linked infantry units (see 1) above), and conduct rally of units (see 2) above)—it can be also and in addition be used to have two adjacent infantry units change places in lieu of moving one single linked unit. The units that switch places need not be linked to the moving units referenced on the card in order to be included in the move, however one of the units in each pair that switch places may not be adjacent to any enemy units. Units that switch places may not engage in close combat or missile fire, they may, however, as a special exception rally per the rules in section 2) above at the option of the moving player.
Example of use of a Line Movement card in accordance with the new rule: The Player of the Line Movement card decides to move three linked Infantry units on the left flank one hex to engage the enemy line & two pairs of Infantry units in the center are nominated to switch places thereby bringing two fresh (four block infantry units) into the front line for possible use in the Player’s next turn. The two pairs that switch places may take advantage of the rally rule in section 2) above when the dice are rolled before the new card is drawn.