Historical Background
Carthage is on the verge of defeat. Spain has been lost, Scipio has landed in Africa and beaten a large, but inexperienced, Carthaginian army at the Battle of the Great Plains. Masinissa has taken his vaunted Numidian light horse over to the Roman side. Hannibal is recalled from Italy, and hurriedly builds an army around the veterans he has brought with him. He creates a corps of war elephants and fields more infantry than does Scipio, but his arm of decision, his cavalry, is far weaker and less capable.
When the armies meet on the plains of Zama, Hannibal knows his cavalry on the flanks will be beaten, but stakes all on crushing the Roman center with his elephants and infantry before the victorious Roman and Numidian cavalry return from pursuing the Carthaginian horse. Scipio, knowing he is outnumbered, masses his legions in the center and fully intends for Masinissa and the cavalry to complete the encirclement and win the battle.
As the battle gets underway, both plans are working. The Carthaginian cavalry is driven quickly from the field while the Romans are pressed to keep their lines intact against the elephants and Carthaginian infantry. The flexible legions prove their worth as reserve lines move quickly to secure flanks or bolster the center. In the end Scipio's plan prevails. The Roman and Numidian cavalry return, the Carthaginian army is surrounded, and the valiant infantry is destroyed.
Scipio had perfected a better tactical system, and that system won at Zama over the legendary Hannibal. The rigid, but powerful phalanx, dominant for so long, had been beaten by the flexibility of Scipio's
legions combined with cavalry. The baton of military supremacy had passed to Rome.
The stage is set. The battle lines are drawn and you are in command. Can you change history?

Optional Rule
Compared to the Julian legions, Scipio's legions still moved slowly, but matched against the Carthaginian formations, they sped. We recommend that all Roman medium and heavy infantry units may move one hex and battle, or move two hexes and not battle. These units are not missile weapon capable.

TomKnight3 replied the topic: #4348 5 months 5 days ago
We played the game as 2 vs. 2 with the center player as the overall commander, with the other player handling the flanks. Going in I said most likely it would come down to the elephants as they can do a lot of damage, or be a liability.

This was a great battle that played out in two parts. Part I the Romans rolled up the flanks of Carthage destroying all six of the Carthage Cavalry. Rome only lost two light CAV units. Romans consolidated the center and took out an elephant unit with ranged fire. Every thing looked good. The Roman cavalry commander on the left was too aggressive and he lost some of his Cav units. It was now more even, but Rome still had the advantage.

We took a break to have some cake. July 4th weekend, we had a Flag Cake.

We had a short strategy session and started Part 2.

Carthage won 14-10. It was a stunning and fast defeat from which Rome could not rebound.

Lot of drama. Everyone enjoyed the scenario. 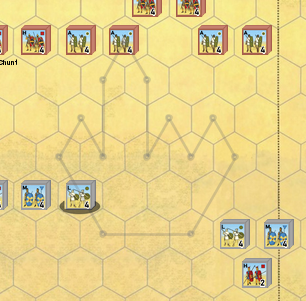 Message from the Romans after a Carthaginian 14-10 win

esparver73 replied the topic: #3356 2 years 7 months ago
A very balanced battle that went tied all the way. Romans used light infantry to kill some elephant blocks but the rest of the elephants wroke havoc amongst the Roman Legions. There was an interesting long fight between light cavalries with much attrition and no definite result. On the Roman left most units from both sides were destroyed and in the center the heavy units clashed against each other. Finally the dice granted a Carthaginian victory 14-13.
Oleg replied the topic: #1150 11 years 4 months ago
Baronflick wrote:

Just recovering from a epic weekend of gaming at Salute and running the London Marathon and i thought you guys would like to see 28mm Zama EPIC C&C game. These were taken at the SoA at Bletchly but the rematch was at Salute. A stunning 16 ft table and over 1400 beautifully painted figures and I was lucky to play on the Carthage side.

Where did you get so many minis and how much time did it take to paint them all?
King-Billy replied the topic: #1069 11 years 9 months ago
I played this again today against my boy Daniel. This time I was the Carthaginians V his Romans. I won 14 to 12.
My elephants played merry havoc in the centre early on, and Dan had some bad luck battling back against them, letting them survive to fight again on later turns. Twice heavy infantry went down to single rolls!

Dan came back hard though across the line, and started pushing me back. It was not to be. Even after Scipio rallied the centre and pushed forward, Hannibal met him and victory was mine.

Very close and enjoyable game. Daniel didn't take may shots with his lights against the elephants, then again I tried to avoid letting him do it.

Bill
alecrespi replied the topic: #817 12 years 7 months ago
Hey Chris,
it looks like amazingly huge!
Even if I'm stronlgy stick to wooden blocks... I have to admit that painted miniatures have their own fascination.
Baronflick replied the topic: #815 12 years 7 months ago
Just recovering from a epic weekend of gaming at Salute and running the London Marathon and i thought you guys would like to see 28mm Zama EPIC C&C game. These were taken at the SoA at Bletchly but the rematch was at Salute. A stunning 16 ft table and over 1400 beautifully painted figures and I was lucky to play on the Carthage side.

picasaweb.google.co.uk/SimonMiller1960/ZamaBletchleyIanSPics
markwals replied the topic: #806 12 years 8 months ago
A friend and I played Zama yesterday.My lights were woefully unable to stop his elephants from closing with lots of medium infantry and causing a great deak of carnage.It came down to the wire with Rome winning 14-13 banners. It seems to be a well balanced scenario.

mark
King-Billy replied the topic: #803 12 years 8 months ago
Played this against my son today. Went to the Carthaginians 14-13. I lost all three Roman leaders to casualty rolls! Not only did this give him three extra flags, it also meant that by the end game I could not score hits with leader rolls.

I used my light infantry to shoot at his elephants, causing him to pull them back, which worked well becuase at the end of the game they trampled a number of reduced units in quick time.

Epic is great. Took nearly two hours to play, and we had a great time.