Historical Background
“The proconsul Cnaeus Fulvius Centumalus lay encamped before Herdonia. This was one of the first cities which had joined Hannibal after Cannae. Hannibal learned that Fulvius was corresponding with the people of Herdonia, and fearing lest relaxed discipline might enable Fulvius to capture the town, he left his baggage in a safe place in Bruttium, where he had been camping, and taking a force stated at thirty thousand men, of which six thousand was horse, he advanced in light order and by rapid marches to Herdonia, where he at once went into camp near Fulvius. Under cover of the hills, before the latter heard of his arrival, Hannibal drew up in line and offered battle. Fulvius had but twenty thousand infantry and less than two thousand horse; but he was unwilling to decline combat. He hastily formed his men into two lines of cohorts, one Roman and one Allied legion in each line, the velites in front, the horse on the flanks. Hannibal likewise had two lines, both of foot and heavy horse, the latter having the light-mounted men in their rear.”

“It should be noticed that the habit of making two lines of cohorts was growing…against the violent onslaughts of Hannibal, the Roman generals had begun to double their lines. The Carthaginians had found the same device serviceable against the wonderful tenacity of the Roman legionary, and used two lines in many cases, beginning in this period. As about this same time there was a transition in Hannibal’s organization, so that his phalanx was gradually adopting some of the features of the legion, it is hard to say how heavy a line this made.”

“The battle opened by an advance of infantry on both sides, the horse remaining in situ. Noting that the attention of the Roman general was exclusively devoted to his line of cohorts, Hannibal thrust out his second and third lines of cavalry to fall on the Roman flanks. By a rapid circuit the Numidians on the right attacked the second Roman line in the rear; the horse on the left charged down on the extraordinarii in the camp. While this was going on Hannibal moved his second line up to strengthen his first, and made another forward movement. The Roman legions fought staunchly and without losing ground or formation, until one of the legions of the second line, -the sixth, -attacked by the Numidians, fell into disorder and communicated the disorder to its leading legion, -the fifth. Perceiving this, Hannibal redoubled his efforts, and the Roman army, thus compromised, speedily showed signs of demoralization. The defeat at once turned to massacre. Fulvius, eleven tribunes, and a vast number of soldiers were killed. The rest, except some three thousand men who escaped to Marcellus in Samnium, were captured. From seven to thirteen thousand men are said to have been slain.”

“Herdonia, which Hannibal no longer trusted, was destroyed, and its inhabitants sent to Metapontum and Thurii. The traitors who had corresponded with Fulvius, he executed. He then returned to northern Lucania and camped on an eminence west of and near Numistro, proposing either to capture the place or make a bid for Marcellus to attack him…” 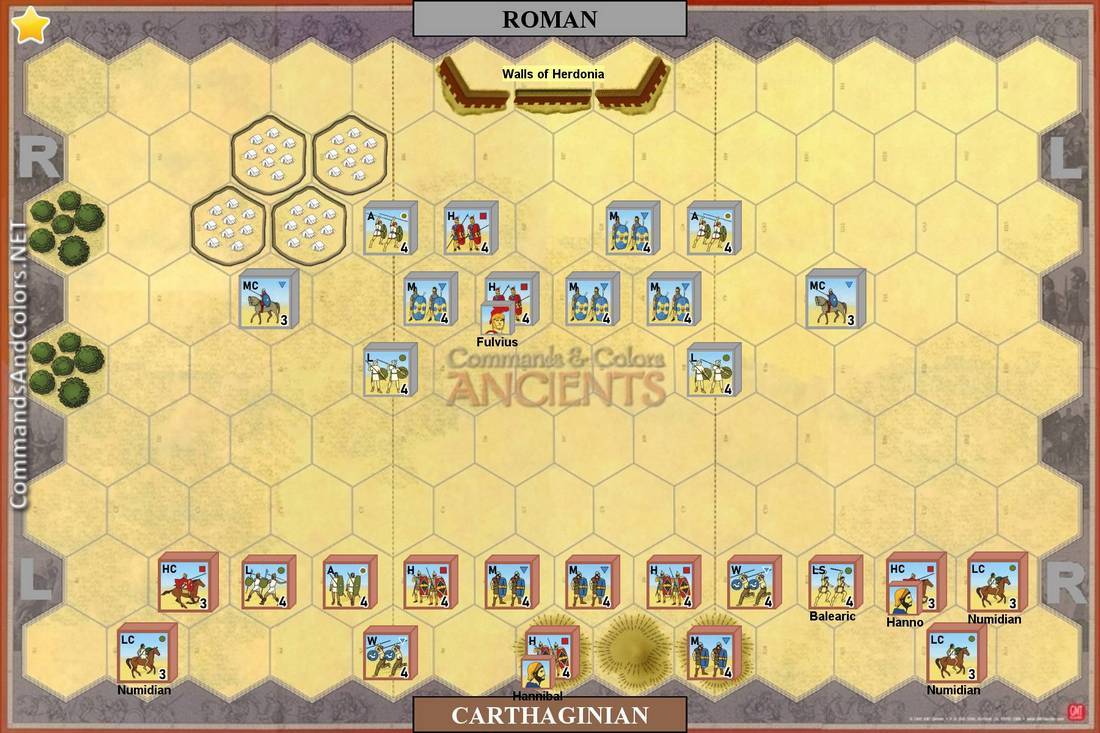 Victory
7 Banners
But the Romans score two (2) Banners if they eliminate Hannibal.
The Carthaginians receive one banner for every two Roman Camp hexes they enter - once they enter a Roman Camp hex that tile is removed from play leaving clear terrain.

Special Rule
Command Rules: A Leader attached (stacked with) a friendly unit may cancel one sword hit on the unit in lieu of canceling a retreat hit. Hannibal may cancel both a sword and a retreat hit if stacked with a friendly unit.
A unit involved in close combat with the support of a Leader may only count one helmet hit amongst those rolled to inflict a hit on an opposing unit unless Hannibal is the supporting Leader then up to two helmet hits can be counted per combat roll.

Balearic Slingers: The Carthaginian Light Slingers are elite Balearic mercenaries, when firing their missiles at Roman Light (Green) foot units they hit on swords—in battle back only they also hit on swords regardless of opponent.

Walls of Herdonia: hexes I6, I7, I8 represent the walls of Herdonia, the local South Italian city that Fulvius was besieging before the battle. Both sides may not enter these hexes. (Its doubtful the locals would have allowed Hannibal’s mercenaries inside anyway during a fierce battle and Fulvius probably had siege lines about the place)